"Anything Goes" at the Ordway Center 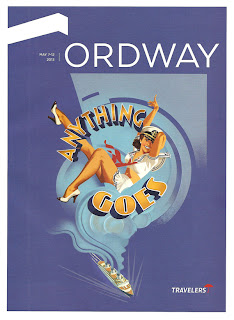 The 1934 Cole Porter musical Anything Goes had a successful revival on Broadway in 2011 and won several Tonys, including Best Revival. That production is on tour and is currently playing at St. Paul's Ordway Center for one short week. I was invited to see it opening night and I thoroughly enjoyed it. It's a terrific new production of a classic musical, with many great songs, fun characters, clever one-liners and bad puns, a full orchestra, and a talented ensemble performing fantastic choreography.

Anything Goes takes place almost entirely on a cross-Atlantic voyage on a ship (which is how people traveled before the days of air travel, and it sound so much more fun). The cast of characters includes a lounge singer/evangelist named Reno Sweeney and her pal Billy, who stows away on the ship to prevent the woman he loves, Hope, from marrying a rich Englishman named Evelyn. Also on board is a low level mobster whom Reno and Billy befriend. The voyage is filled with mistaken identities, high jinx, romance, and of course, music.

It's quite remarkable that a piece written in 1934 is still fresh, funny, and entertaining almost 80 years later. Now that's a classic. Playing through this weekend only at the Ordway - so get your tickets now!