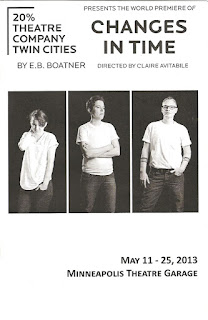 I love finding new (to me) theater companies, and with over 70 theater companies in this theater-rich town, there are many I have yet to discover. Here's one I can cross off my "to do" list - 20% Theatre Company, "committed to supporting and vigorously promoting the work of female and transgender theater artists, and celebrating the unique contributions of these artists to social justice and human rights." (Their name comes from a study that found that only about 20% of professional theater artists are women.) Their current production, the new play Changes in Time, speaks directly to their mission. It's a story of a transgender individual, who was born in a girl's body but always felt like a boy. We see three scenes in her* life - as a teenager in the 1950s, and in 20 year increments in the 70s and '90s. Taken as a whole, the play is an effective and moving exploration of how it feels to be born in the wrong body, and how that affects the individual as well as their relationships with those who love them.

Wishes: We meet our protagonist Lorraine, or Rain as she prefers to be called, as a teenager away at camp in the 1950s. She sneaks out to meet her friend Court on their last night at camp. They share stories and snacks, and Rain sadly learns that what she feels is seen as weird even by the person she loves and trusts the most. In matching blue jeans, white t-shirts, and crewcuts, Chava Curland and Briana Zora Libby are charming and sweet as Court and Rain, a perfect picture of innocent young love.

Dresses: Twenty years have passed, and Lorraine returns home to Connecticut from Boston to attend her cousin's wedding with her mother. The entire scene takes place in the car on the drive there, and as often happens on a long drive, the two have an intense and real discussion and talk about things they've never talked about before. Lorraine's mother, perfectly groomed in a skirt and jacket with hat and gloves, can't understand why her daughter can't wear a dress, just once, for the wedding in which she's a bridesmaid. Lorraine tries to explain that it goes against every fiber of her being, but her mother just doesn't get it. Still, she loves and supports her daughter, and will do anything in her power defend her. Muriel Bonertz is a hoot as the prim and proper mother with a hidden depth of feeling, and has great chemistry with Heather Spear as the tough but tender daughter.

Changes: Another twenty years have passed, and much has changed - Lorraine is now Laurence, and his mother has died. This time it's his father's turn to have a real and intense discussion with the child that he loves but can't quite understand. You get the sense that he really loves Laurence and wants him to be happy, but can't quite wrap his head around the decisions he's made, and he misses Lorraine. The truth comes out, and it's not pretty, but it's a beginning that leads to greater connection. Chris Little makes his acting debut as Laurence, which is incredibly brave, but it's Dann Peterson who shines in this scene with his very natural and touching performance as a father coming to terms with the fact that the child he's always loved is still there, even though he might look different.

Theatrically, it's interesting to track one character through several stages of their life, especially when there's such change. From a more global standpoint, it's pretty great to use theater to give voice to an underrepresented community. Unfortunately there's only one more performance of Changes in Time (go directly to the Minneapolis Theatre Garage if you're interested), but I'm glad I caught this one before it closed.


*I feel like the English language is failing me, we need a gender-neutral pronoun!