"An Iliad" at the Guthrie Theater 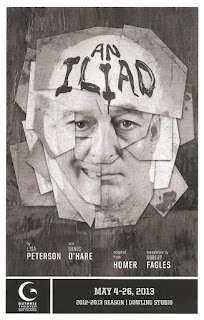 Stepping off the elevator onto the 9th floor of the Guthrie Theater, I was treated to a site I've never seen before, despite having seen dozens of productions in the Dowling Studio. The wall that separates the lobby from the theater was gone - leaving a full view of the stage from the elevator, with the audience seats behind it and to one side. The Studio is what they call a "black box theater," meaning the room is just a big black box, in which the stage and seating can be arranged in infinitely different ways. But in reality, there are three or four common arrangements that are usually used. The set-up for An Iliad, a one-man show version of Homer's epic poem The Iliad, is the most creative use of the flexibility that this stage has to offer that I've seen. At one point our storyteller goes out into the lobby part of the theater and explores the glorious echo heard in that space, utilizing every square inch of the 9th floor. But this is not the most remarkable part of An Iliad. That would be Stephen Yoakam's performance as the storyteller poet. He tells the story directly to the audience (the house lights were fully or partly up for some of the show, creating that feeling of interaction), as well as acting out many roles from a baby to a crippled god, imbuing each moment with such depth of emotion. It's another one of those epic one-man show performances that must be seen.

I was vaguely familiar with The Iliad from my high school and college studies, as most people probably are. It tells the story of The Trojan War, you know - the one with the Trojan Horse, "the face that launched a thousand ships," Achilles, Agamemnon, and all of that. But the brilliant thing about this telling of the ancient story (co-written by Lisa Peterson and Denis O'Hare), is that it's really about any and every war that's ever been fought. At one point our storyteller lists what seems like every war in human history, and there are disturbingly many. The list is endless, and he gets more and more dejected with each one, until he quickly speeds through the end of the list and is silent. An Iliad makes the story of the Trojan War real and relevant, a story of the horrors of any and all wars.

Stephen Yoakam is the poet Homer himself, reluctantly singing his song again, reluctant because of the death and destruction that is at the center of it. He calls to the muses for help, forgets names, skips over parts and lingers over others, stripping off his long coat, sweater, and eventually shoes and socks as he gets deeper and deeper into the tale. It's as if it physically pains and tires him to tell this story. This is a performance that's real, raw, intense, moving, and entirely captivating.

But of course, a "one-man show" is never really that. Stephen is aided by the direction of Benjamin McGovern, the set design of Michael Hoover (the focus of which is what looks like an abandoned fountain in a town square, adorned with sand, water, scaffolding, and Greek wall sculptures, for an interesting mix of modern and ancient), and the lighting of Tom Mays (it's like another character, showing us where to look, flashing with the muses, house lights increasing and decreasing at appropriate times).

Playing now through May 26 at the Guthrie Theater, An Iliad is a sobering look at war through the eyes of one man and one ancient war that doesn't feel so ancient.