"To Life! A Benefit to End Gun Violence" at the Varsity Theater 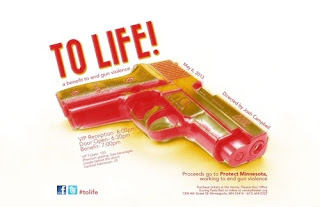 A common reaction to the ever increasing violence in this world is helplessness. A feeling of, "What can I do, what can anyone do to stop this?" A group of theater artists responded to this feeling of helplessness by doing what they do best - putting on a show. A show to educate, inform, raise money, and entertain. Josh Campbell, Brendan Bujold, and Tre Searles joined their artistic forces with Protect Minnesota, an organization working to end gun violence. The result was a fun evening of music and theater that raised almost $12,000 to aid in Protect Minnesota's goal of ending gun violence in Minnesota. Proving once again my belief that theater has the power to change the world, in small ways or big.

This past Monday night at the charming Varsity Theater in Dinkytown, eight fabulously talented theater artists, under the direction of Josh Campbell, shared songs from musical theater interspersed with seven short scenes by different playwrights, showing their differing reactions to gun violence, some amusing, some sobering, some righteously angry. Most of these are from a series of plays gathered by playwright Caridad Svich, whose bilingual play In the Time of Butterflies was recently seen at Mixed Blood (read an interview with her here). My favorite scenes were Right After Virginia Tech, written by Laura Zam and performed by Tod Peterson, and Bridge to Baraka: The Pen Instead of the Gun, written by Yvette Heyliger and performed by Regina Marie Williams. The former is smart, funny, and real, as the playwright tries to wrap her brain around the issue and calls for listening, respect, and empathy from seemingly opposing sides. Tod is such a fantastic performer that he brought the words and emotions of the playwright to life. The latter contains some of that righteous anger I mentioned, beautifully conveyed by Regina, and I learned something I didn't know about the beginning of the modern gun rights movement.

Musical highlights of the evening include:

For more information about Protect Minnesota, visit their website. Thanks to all of the above theater artists for putting their many talents towards a great cause, raising money and awareness along the way.  To Life! 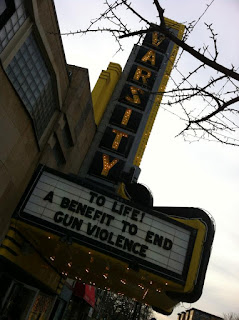