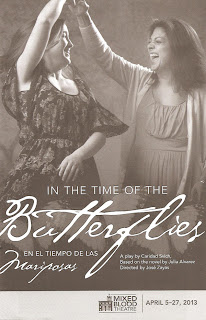 Mixed Blood Theatre often has surtitles during their plays, I assume to make them more accessible to the hearing impaired. But in the case of their new play In the Time of the Butterflies, the surtitles are needed to translate from spoken Spanish to English and from spoken English to Spanish. I don't speak a word of Spanish, but like in foreign films, you soon get used to reading the words while simultaneously getting the emotional content from the actors' performances. And there is much emotional content in this play. It's based on the historical novel of the same name, a fictionalized account of the Mirabel sisters. The four sisters were political dissidents in the Dominican Republic who worked to overthrow the dictator Trujillo, aka El Jefe, who is believed to have ordered the deaths of 50,000 people during his thirty-year reign. Three of the sisters were among those numbers. The one surviving sister, Dede, tells their story and keeps their memory alive.

In the Time of the Butterflies is constructed in the framework of memory. Dede is telling her story to a Dominican-American writer who is writing it down to tell the world. It's a painful story, but a pleasant one too as Dede remembers the happy times with her sisters in their family's garden. The story is told partly through Dede's reminiscing, and partly through scenes of the sisters interacting with each other and reading diary entries. It starts when they are young girls with hopes and dreams, and continues as they see those dreams thwarted by El Jefe. He invites the sisters to a party, and when Minverva rejects his advances, he puts their father in jail and they are forever on his "naughty list." As the years advance, the sisters, especially Minerva who studies to be a lawyer but is prevented from practicing, become more and more involved in trying to end Trujillo's dictatorial reign. Youngest sister Maria Teresa joins her, and eventually so does Patria. Dede reluctantly gives the group a place to meet, but is concerned for her family's safety. And rightly so - Minerva and Maria Teresa are jailed and tortured. They are eventually released, but their story, along with Patria's, comes to a tragic end. Dede is left to deal with her feelings and represent the heroism of her sisters to the world.

This bilingual cast of seven is equally great and expressive in English and Spanish, flowing back and forth between the two languages smoothly. As the only man in the cast, Raul Ramos is downright creepy as the evil dictator, and also plays several other roles. Maria Gonzalez as the one surviving sister is elegant and proud, mournful and hopeful. Hope Cervantes is the attentive and curious modern American writer, who has her own story about coming home to the land of her ancestors. The four sisters are wonderfully played by Maggie Bofill, Claudia de Vasco, Adlyn Carreras, and Thallis Santesteban, with a genuine feeling of camaraderie and occasional tension between them. They also look beautiful, thanks in part to the parade of dresses they're put in by costumer Jeffrey Bleam. From the innocent white dresses of the opening scene, to the flowery dresses in the garden, and everything in between, they manage to look classic and period-appropriate yet fresh and modern.

This play is the second in a year of plays written by women produced by Mixed Blood* (written by Caridad Svich based on the novel by Julia Alverez). The first was the hilariously biting comedy Elemeno Pea by Molly Smith Metzler, and the remaining are TBA. I think this is a fantastically bold choice by Mixed Blood, but not surprising considering their commitment to diversity of all kinds, which is not just words but can be seen in every play they produce. As Artistic Director Jack Reuler notes in the playbill, "In our so-called liberal entertainment industry, the gender balance of writers, directors, and producers remains profoundly imbalanced. We are proud to walk our talk, practice what we preach, and live our mission in this arena." Right on. I'll be watching.


*My one complaint about Mixed Blood Theatre, which I admire more and more the more I see of their work, is that they consistently do not put artist bios in their playbills. As someone who likes to make connections between the many shows I see, I find this disappointing. But it's a very minor quibble for a theater that does such amazing and diverse work.