"Mary Poppins" at the Orpheum Theatre 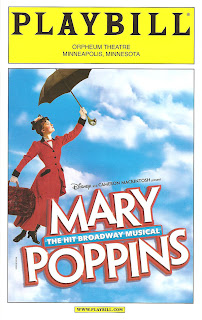 In general, I'm not a big fan of the current trend of turning movies into musicals. But when the original source is a classic movie musical, I make an exception! The only surprise is that it took 40 years for the 1964 beloved children's classic Mary Poppins, starring the great Julie Andrews, to make it to the Broadway stage. The 2004 West End production moved to Broadway in 2006, and just closed last month. I've never seen it on Broadway because there are just too many other good choices (and I'm over 12 years old), but I was excited to see it on tour and see how this classic translates to the stage. It's been a while since I've seen the movie (again, I'm over 12 years old), but the playbill kindly notes the half dozen new songs (by George Stiles and Anthony Drewe) that have been added to the originals from the movie (by Richard and Robert Sherman), with varying degrees of success. There are a few unnecessary songs and scenes that I would cut to get all the kids in the audience (and myself) home to bed earlier, but some of the movie's best moments have been translated to the stage remarkably well. On the whole, Mary Poppins is an utterly charming stage musical that's highly entertaining, especially for the young ones. And let's face it, if "Supercalifragilisticexpialidocious" doesn't make you smile, it's possible you don't have a soul.

Highlights and other thoughts:

Mary Poppins is not a musical I would choose to see on Broadway, but on tour, I think it's a great choice, especially if you have little ones. It's never too early to expose kids to theater, and this is a great one. Just be prepared for a late bedtime and crabby child the next day! Small price to pay for this memory (playing through this weekend only). 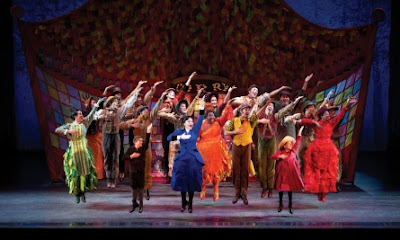