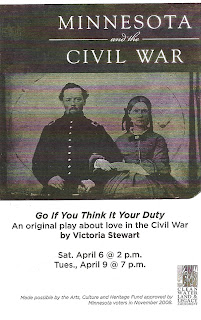 I've never thought of the Civil War is as a particularly important part of Minnesota history, its battles being fought hundreds of miles away. But a new exhibit at the Minnesota History Center proves otherwise. In fact, Minnesotans were among the first to volunteer for the Union Army. One such volunteer was Madison Bowler from Nininger, a small town near Hastings. He enlisted in 1861 and served for five years before returning home to Minnesota. During that time he married his fiance Lizzie and had a child, despite only being home for a total of twelve weeks during a four-year period. Madison and Lizzie left behind hundreds of letters that they wrote to each other, which have been compiled into a book called Go If You Think It Your Duty by Andrea R. Foroughi. The book was adapted into a one-hour play by Victoria Stewart and presented at the History Center for two performances. On the day I attended the play, I also visited the exhibit (as well as the sobering exhibit on the US-Dakota War that happened right here on Minnesota soil during the same time as the Civil War). I found it to be a really nice complement to the exhibit and a great way to bring a little piece of Minnesota history to life.

This little play features some pretty big names in the local theater scene - director Craig Johnson and actors Anna Sundberg and Peter Christian Hansen as the Bowlers (see also Venus in Fur). You know that cliche "I would watch [insert name of favorite actor] read the phone book?" Peter and Anna are two such actors for me, and even better when what they're reading are a series of impassioned and touching letters between a husband and wife separated by war. The play mostly consists of Madison and Lizzie standing in front of music stands on opposite sides of the stage, reading their letters to each other. This may sound boring, but in the hands of Peter and Anna, the words come to life. They convey the joy, frustration, anger, sadness, and hope in the life of this couple lived apart. The letters cover everything from the mundane (oh those awful Minnesota winters) to the profound (the death of Lizzie's sister), from joyful (the birth of baby Victoria) to unpleasant (Madison and Lizzie's disagreement about where Madison's duty lies). There are just enough conversation scenes interspersed among the letter readings to weave together a story (Abby Desanto and Dietrich Poppen play additional characters). Period costumes and music of the time (James Lekatz on piano provides a soundtrack, with the cast joining in on several songs) add to the sense of time and place.

Go If You Think It Your Duty is a short, sweet, simple play that brings a little piece of history to life. Unfortunately there are no more performances of this play planned, but the exhibit runs through the fall, so maybe it'll pop up again. I have attended a few special events at the History Theater, but I wasn't really aware that they produce original theater. I am now. The moral of the story is - keep your eye out for theater in unusual places, it's everywhere.