"Bessie's Birthday" by Theater Latte Da at the Lab Theater 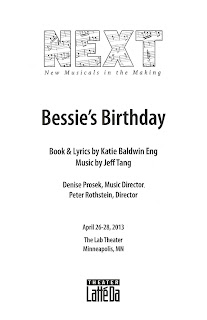 When I walked into the Lab Theater last night for the final selection in Theater Latte Da's new works project "NEXT: New Musicals in the Making," they were playing Dolly Parton. I took that as a good sign. Not that I needed one, I've really been enjoying NEXT and this is the one of the three pieces that I've seen before, as part of a triptych of one-act musicals called Passage of Dreams, presented in 2009 and one of my favorite shows of that year (and this was my favorite of the three pieces, which I thought at the time would make a great full-length musical). Like the music of Dolly Parton, Bessie's Birthday is funny, homespun, sweet, and surprisingly poignant at times. Writers Katie Baldwin Eng (book and lyrics) and Jeff Tang (music) have worked with director Peter Rothstein and music director Denise Prosek to continue to develop and expand Bessie's Birthday over the past few years, with the results being presented for three shows this weekend.

Like Theater Latte Da's most recent full production, Light in the Piazza, Bessie's Birthday is about a young woman who is emotionally still a child because of brain damage suffered in her youth. But that's where the similarity ends. Light in the Piazza is a love story set in Italy in the 1950s, with a gorgeous, almost operatic score to match. Bessie's Birthday is about a family in Wisconsin in the present day, with a score appropriate to the story. The songs are funny (when the men sing about grilling meat), or touching (the sisters sing to each other), or both (splash!). There's not a whole lot of action, but we get to know this quirky little family. Bessie (Caroline Innerbichler, who was in Passage of Dreams but not this piece) is turning 30, even though she's still a little girl in many ways. Her sister Delphine (Elizabeth Griffith, who was also in last week's C.) is returning home to Wisconsin with her New York boyfriend (Sasha Andreev) in tow. Their parents May (Janet Hanson, the only returning cast-member from the 2009 production) and Sam (James Detmar) are throwing the usual summer pool party for Bessie. The only other guests are funny neighbor Jack (John Gamoke) and his wife Grace (Julie Madden), who provide much of the comedy. They prepare for the party, have conversations, light fireworks, tell jokes, and toast the birthday girl.

Bessie loves to swim, and is most at home in her pool. It gives her the freedom to be herself and see the world in her own particular way. Bessie's birthday tradition is to push her guests into the pool, fully clothed. In an effective story-telling device, as each character gets pushed into the pool, they freeze for a few moments in mid-air and speak their truth. Funny or poignant, whatever it is, but very real. The entire play has been building to this moment, and it's a satisfying ending to the story, while still knowing that the stories continue in these characters lives. As has been the case throughout this series, the entire seven-person cast gives fully realized performances, despite the scripts and music stands before them. Caroline portrays Bessie with a sweet innocence and a lovely voice to match. I think I like Elizabeth even more than I did in C., she's very in the moment. Sasha is genuine and likeable as the outsider trying to make sense of this new environment. Janet brings much heart to the role of a mother trying to protect her daughter and afraid to let her go off on her own (another similarity to Light in the Piazza), and James Detmar nails the part of the typical Midwestern dad. Last but not least, John and Julie are a hoot as the crazy neighbors (as was Julie in Company last fall - she's a great comic singer).

There was a lot of talk in the post-show discussion, from the creators and audience members alike, about how this is a quiet and delicate story, not your typical big and splashy musical. It's still short for a musical, about 75 minutes with no intermission, but perhaps that's what best serves the story. It's the little moments that touch the heart, the simplicity of the story and interaction between the characters. I could easily spend two hours with these characters, but not at the expense of those quiet moments of poignancy. That's the challenge.

Whenever I happen upon a post-show discussion, I almost always stay, along with typically about 10% of the audience. It's worth noting that all three of the NEXT shows I've attended have had a much larger retention rate for the post-show discussion, probably about 75%. Perhaps the type of audience that's drawn to the reading of a new work is more invested in it than the average theater-goer. The creative teams have seemed very interested in what the audience has to say, as that's a big part of the development of a new work. I would be happy to see any of these three pieces - When the Moon Hits Your Eye, C., or Bessie's Birthday - as a full production. If I had to pick just one, I would choose When the Moon Hits Your Eye. The characters and their stories really drew me in, I loved the use of music and mix of styles, I found the characters reading stage direction and descriptions of other characters to be a fresh and interesting story-telling method, and I can imagine lots of interesting possibilities for staging (the three levels of the apartment building, the sunset at the end). But even if I don't see any of them again, being a part of the creation of these three diverse new works has been a great experience. I look forward to next year's NEXT!