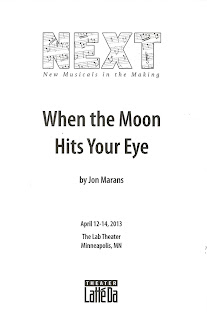 Continuing their mission to "create new connections between story, music, artist, and audience by exploring and expanding the art of musical theater," Theater Latte Da is presenting three new works as part of "NEXT: New Musicals in the Making." The creators spend two weeks workshopping the piece with Theater Latte Da's Artistic Director Peter Rothstein, Music Director Denise Prosek, and a talented cast of local actor/singers. At the end of that period they present the work to audiences, who are invited to give feedback on what they've seen. For a musical theater fan like myself, it's an exciting opportunity to observe and maybe even take part in the creation of a new piece of music-theater.

The first installment, When the Moon Hits Your Eye, was presented last weekend at the gorgeous Lab Theater. This "play with music" was written by playwright Jon Marans (who also wrote Old Wicked Songs, which Latte Da did at the Guthrie Studio in 2008) and features several diverse songs in the public domain. It's a slice of life in the neighborhood known as Hell's Kitchen in NYC, specifically the corner of 48th Street and 9th Avenue. It's a fantastic neighborhood that's rich with stories (if you're in NYC to see some shows, do not eat anywhere near Times Square, instead head over to 8th or 9th Avenue, where the real people live, work, and eat). Our characters include engaged couple Natalia (Emily Gunyou Halaas) and Larry (Rudolph Searles III), Natalia's mother Felizbella (Michelle Cassioppi), her ex Matthew (Steven Grant Douglas), and the grieving Debbie (Sara Ochs), all of whom live in the same building. Their landlord Gian Carlo (Raye Birk) also works in the barber shop on the ground floor, and the widow Liz (played by Nancy Marvy), who used to teach in the neighborhood, is friendly with the residents. These seven characters make up a little family, and the play shows us a few days in their intersecting lives - weddings, affairs, first dates, illnesses, break-ups, career changes, and other usual stuff of life. And of course, music accompanies their life. Music as diverse as an Italian opera, the plaintive Boll Weevil song ("lookin' for a home"), a haunting Scottish border ballad, a Mongolian love song, and a Portuguese celebratory song. The characters narrate each others' actions (partly due to the fact that this is a reading, partly as a story-telling choice), but in a really interesting and interactive way. They don't just blankly read the narration, rather they convey their feelings about what's going on through the reading. The language is beautifully descriptive; you can easily visualize the action as it plays out in different areas of the building. All of these pieces combined to tell a really lovely story, funny, poignant, and completely engaging. I think the creators have something really special here, and I'm excited to see where it will go next. Although I might call it a musical rather than a play with music. Characters sing to each other in character, espressing their emotions, and walk down the street singing. That, to me, is the very definition of a musical.

I know this is supposed to be about the work, but without the fabulous performances by every one of the seven cast-members, you cannot appreciate or even really see the work. They spent about two weeks with this material, and though they had scripts in front of them, they were able to create fully rounded characters with a wonderful chemistry and sense of family between them. Steven and Emily's duet on the border ballad is an absolute dream, Sara sings gorgeously in Mongolian, and Rudolph's Italian opera is thrilling. Raye and Michelle portray a sweet and tender later-in-life love story, and Nancy's character is the heart of the building. And did I mention that they all speak in authentic-sounding accents, and sing in multiple languages? This wouldn't be an easy piece to do with four weeks of rehearsal, how much more challenging with only two weeks and a constantly changing script!

As anyone who reads this blog knows, musical theater is my favorite thing in the world. But I think I love it most for what it can be, and often isn't in whatever movie has been most recently adapted to the Broadway stage. Theater Latte Da strives to elevate the art form that is musical theater and move it into the future. That's what NEXT is all about, and judging from the first selection, it's going to be an amazing three weeks at the Lab Theater. Up next is C., a new musical adaptation of Cyrano de Bergerac by Robert Elhai and Bradley Greenwald. Following that is Bessie's Birthday, which has been expanded from the one-act musical presented as a part of Passage of Dreams four years ago (one of my favorite shows of the year). I remember thinking when I saw it that it could and should be expanded into a full-length musical, so I'm thrilled that they're doing just that.

If you're a fan of music-theater, or just enjoy seeing the creative process at work, I highly recommend you attend one or both of the remaining selections in "NEXT: New Musicals in the Making."