"C." by Theater Latte Da at the Lab Theater 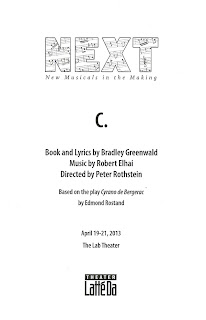 The 1897 French play Cyrano de Bergerac has been adapted many times and in many forms, so much so that everyone knows the story of the poet Cyrano and his unusually large nose, who writes the words for a handsome but ineloquent man to woo his love Roxane. After musicals, operas, and countless movies (including the 1987 movie Roxanne, the only version of the story I've seen), it may seem like there's nothing new to say. But Bradley Greenwald's new musical adaptation (with composer Robert Elhai), presented as part of Theater Latte Da's new works initiative NEXT, strives to do just that. It lies somewhere in the intersection of theater, musical, poetry, and opera, emphasizing the music and poetry that is in the original piece. Or as Bradley writes in a note in the playbill, "It's the story of Cyrano and music, of Cyrano and poetry, and the story of what music and poetry mean to Cyrano, Roxane, Christian, me, you, all of us in this room right now." Still in its earliest form (they've been working on it for less than a year, and I saw the very first public presentation - how cool is that?), it feels a little rougher than the last week's NEXT piece, When the Moon Hits Your Eye, but it also feels like it has great potential. There's a lot going on, with many characters (a 13-person cast, many of whom play multiple characters, plus someone reading a few stage directions) and a fairly ambitious staging, so it's quite remarkable that in just two weeks the creators, cast, director Peter Rothstein, and music director Denise Prosek have gotten it into the shape that it is. They're still making changes, they mentioned in the post-show discussion (which is a big part of NEXT - getting audience feedback to make the work better) that another song will be added after the curtain call tonight. I feel privileged to have seen it in this early form and look forward to seeing where it will go from here.

As I said, we all know the story. Cyrano loves Roxane, a childhood friend, but she loves Christian. Cyrano reluctantly agrees to help Christian woo her by giving him words to say ("we poets always have epistles to our imaginary lady loves in our pockets"), because he is unable to express himself in the poetic way that Roxane desires. Roxane falls even more deeply in love with Christian from the letters that he sends her when he's away at war, not realizing that who she's really falling in love with is Cyrano. When she tells Christian she would love him even if he were ugly, he realizes that she doesn't really love him, and is devastated. He begs Cyrano to tell her the truth, but tragedy intervenes. (Not at all like the happy ending I remember from Roxanne!)

Apparently there are no limits to Bradley Greenwald's talents. He has an incredibly gorgeous voice, and could easily make a career doing nothing but musicals and opera. But he doesn't just rest on that effortless voice, he also does non-musical theater - from drama, to comedy, to an Ivey-winning performance in the one-man show I am My Own Wife. Adding to that list of talents, he did his own translation of Cyrano from the original French, so as not to be influenced by anyone else's interpretation of the work (I knew he could speak and sing German, but French too!). He's taken this literal translation and formed it a fresh new perspective on the story. The original play is all in verse, but Bradley chose to have only Cyrano speak in verse to distinguish his poetic voice from the masses. He focuses on the music that's in every scene, so when we hear music it feels organic to the story - the first scene takes place in a theater, another with a group of composers in the next room, another at war where soldiers sing to keep their spirits up. The plan for a fully staged production is to have the musicians be on stage and part of the action, rather than a separate band or orchestra. After all that creative muscle, Bradley also sings beautifully and expressively, and has a glorious death scene.

Bradley has a large and talented cast supporting him, some of whom I know from other shows and some who were new to me. One of the latter is Elizabeth Griffith, who is sweet and serene as Roxane, with a lovely voice, but also shows her longing and grief. Sean Dooley (whom I don't think I've seen since the 2004 Michael Brindisi production of Hair, one of my favorite local theater memories) is a great choice for Christian. His voice doesn't have the depth and richness of Bradley's (but whose does?), rather, his voice is like Christian's own words - simple and straight-forward and from the heart. Cyrano speaks in poetic flourishes, with a singing voice to match, and it makes sense that when Christian sings, his voice also matches his words. He's charming and sweetly awkward when trying to express himself and falling short, showing that Christian really does love Roxane as much as Cyrano does. "I love you and want you to always know it, that's the best I can say it, I'm no poet."

The music, composed by Robert Elhai, is comprised of a variety of styles, which he chose to do to give the piece a timelessness, or as Peter Rothstein said, "immediacy." There's a marching-off-to-war-WWI-ish song, a charming Renaissance era duet between Cyrano and Roxane recalling their childhood, a rousing duel song (in which Cyrano appears to be making up the lyrics as he goes), a touching love song "Love Lies Waiting," and what sounds like a folk song from Gascony. It's a nice collection of songs that fit the story and enhance it.

The two pieces I've seen so far in Theater Latte Da's "NEXT: New Musicals in the Making" have been so different, but equally intriguing, satisfying, and promising. When the Moon Hits Your Eye is an intimate and modern story with just seven characters, each of whom we get to know and love, featuring songs from the public domain. C. is more epic and timeless, with a huge cast of characters (sometimes difficult to keep track of, especially without costume changes to give us a clue), and original music that feels like a real part of the story. So far NEXT is showing the great diversity that can be found in music-theater, and I can't wait to complete the trilogy next week with Bessie's Birthday. But you still have two chances to see C. - don't miss out! For more information and to purchase tickets for this weekend and next weekend, see Latte Da's website, or just show up at the Lab Theater (a great setting for this series because of its vast open space like a blank slate).