"Death of a Salesman" at Lyric Arts 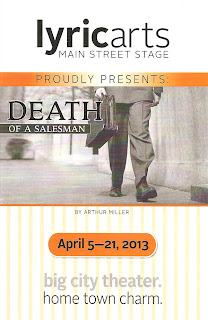 Arthur Miller's Death of a Salesman is a classic American play. Premiering in 1949, it won the Pulitzer Prize and Tony Award. It's a complex and layered look at the life of a man named Willy Loman who worked hard his whole life for his family, but never quite achieved what he wanted. The director of the new production at Lyric Arts in Anoka, Robert Neu, writes in the program notes: "Death of a Salesman is about the American dream, for better and for worse. Willy's dream, while he can hold on to it, seems possible and beautiful. The ultimate dissolving and corruption of that dream destroys Willy and forever changes his family." It's the great American tragedy - you work and work and work to pay the bills and buy the things you need, and at the end of it all, what do you have to show for it? A downer, yes, but beautifully written and a thought-provoking look at life that's still relevant more than 60 years later. This is the first play I've attended at Lyric Arts (I've previously seen a few musicals there) so I wasn't quite sure what to expect, but they do a very nice job with this complex work of theater.

An interesting feature of this play, and part of what makes it so powerful, is that we get a look inside Willy Loman's mind as he remembers scenes from his past and talks to ghosts. He's at the end of his career as a traveling salesman, and he's tired and slowly beginning to lose his mind. His wife Linda loves him desperately and wants to help him but doesn't know how. His two grown sons are a disappointment to him, and because of that mostly stay away. When the whole family is under the same roof again, issues from the past resurface. Willy remembers happier days when the boys were football stars with bright futures ahead of them, as well as the event that changed all of that. This tragic story could only have a tragic ending, and it's devastating to watch the inevitable unfold.

I was quite impressed with the cast; Death of a Salesman is not an easy play for a community theater to tackle. Warren Sampson is believable and sympathetic as Willy, playing his moments of sanity mixed with ever increasing desperation. Martha Wigmore conveys Linda's love for her husband and her feelings of utter helplessness. As the playboy younger son Happy, who like his name seems to have not a care in the world, Max Lorei is all youthful charm. But the standout in the cast is Ty Hudson (who also had a nice turn in one of my favorite shows of last year, Summer and Smoke at Theater in the Round). As the elder son Biff, he gives a very real performance that culminates in a gut-wrenching physical scene when he confronts his father with equal parts hate and love.

The play takes place mainly in and around the Lomans' Brooklyn home, a cozy set (designed by Brian J. Proball) with vintage appliances and an upstairs loft where the boys sleep. Scenes from the past are differentiated from the present by slight changes in lighting and costumes and a lighter attitude among the characters.

Death of a Salesman is playing now through April 12 at Lyric Arts Main Street Stage in Anoka. If you live on the north side of town, it's worth the drive to see this classic piece of American theater.