"Misterman" by Frank Theatre at the Southern Theater 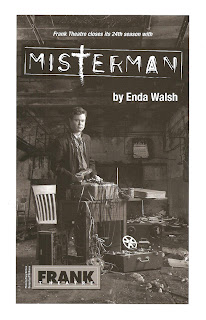 I go to a lot of theater (obviously). Most of it falls within the realm of the expected. It's rare that I see something that's completely unlike anything I've seen before. So when I do, I appreciate it, even if I don't quite understand it all. It's refreshing in my typical 3-4 shows a week schedule to see something bold, edgy, risky, and utterly captivating. Frank Theatre's production of Irish playwright Enda Walsh's* one-man show Misterman is such a piece. Featuring a truly remarkable performance by John Catron, a fantastic space, and pretty intricate technical choreography of audio recordings and equipment that start and stop on cue, it's definitely something to see. It may not for everyone, but as someone who sees a great quantity of theater, it's just what I needed to jar me out of the usual.

I'm not sure I can even summarize the plot for you, but I'll try. There's a man named Thomas living in the small Irish town of Inishfree. He reenacts one day in his life with the help of audio recordings of his parents and neighbors. When he leaves his front door (but not really) and meets people in the town (but not really), he also acts out their side of the conversation. He buys his mammy's favorite biscuits, visits his father's grave, treats himself to a cheesecake, and goes to a local dance. This is all happening inside his own head, as he desperately tries to make sense of how he ended up where he is (wherever that is). It's not so much about what happens as how it happens and what it means for this fascinating character.

This is a gutsy, fearless, no-holds-barred performance by John Catron (and I thought he let loose as the drunken Jamie Tryone in Long Day's Journey Into Night, but that was nothing compared to this!). In what must be a physically and emotionally exhausting ninety minutes, he sprints across the large space of the Southern Theater, laughs, cries, cooks an egg and eats it, gets drenched by rain, strips, runs in place, climbs up and down stairs, and plays several different characters opposite each other, all with different accents and physicality. He acts opposite a tape recording and makes it so believable you can almost see the person he's talking to. He is completely immersed in this character, and just watching the expression on his face change as he listens to a recording of a particularly pivotal moment in his life is revelatory. Thomas is a deeply disturbed man, but John also makes him sympathetic. It's a fully committed performance that is fascinating to watch.

The Southern Theater is one of my favorite places to watch theater. The cavernous space has so much room to be transformed. Sometimes it's sparse, bare, and beautiful, and other times, like this, it's cluttered with the things that make up the universe of the play. All kinds of discarded recording equipment are piled on shelves and in corners. A makeshift kitchen is on one side of the stage, complete with a working hot plate and sink. A cemetery is constructed out of orange pop cans, as if Thomas has created the world in which he plays out his story. Kudos to director Wendy Knox and the tech team (set design by Michael Sommers, sound design by Michael Croswell) for the flawless execution of the many pieces and parts that go into this play - recordings that play right on cue, things that drop from the ceiling, and tape players that turn on and off. (Some pretty big local theater names lend their voices to the recordings, which are mostly unrecognizable due to the accents, but it's still fun to guess.) There are a lot of moving parts in this "one-man show," and it all appears seamless and effortless.

Misterman plays at the Southern Theater Thursdays through Sundays, now through April 28. If you're looking for something different and interesting and a little bit bizarre, this is it. In addition, Frank Theatre is offering free readings of three other plays by Enda Walsh on Wednesdays at the Southern. If I weren't booked the next three Wednesdays I'd check it out to get a deeper look into the (somewhat disturbed) mind of this playwright.


*A big reason why I wanted to see this play is to see more work by Enda Walsh, who I know as the Tony-winning book writer of the musical Once, the musical adaptation of one of my favorite movies. Never in a million years would I have connected the writer of Misterman with Once, so different are the two pieces. But after thinking about it a bit, it makes perfect sense. The movie Once is a quiet, subtle story, one that doesn't translate easily to the traditional big Broadway musical stage. Enda Walsh brings some of that rawness that is so apparent in Misterman to Once, keeping it from becoming too sweet and sappy, and keeping it grounded in reality. I guess that's why they gave him a Tony for it.