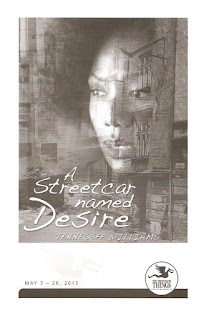 Ten Thousand Things does theater like no other company I've seen, and Tennessee Williams wrote some of the best American plays of the 20th Century - full of drama and tragedy and beautifully written characters. Combine these two powerhouses and you have a pretty remarkable experience at the theater. A Streetcar Named Desire is one of Williams' best-known plays and deals with complex issues of family relationships, spousal abuse, rape, poverty, and mental illness. My first introduction to the work was a beautiful production at the Guthrie three years ago, a memory I try to hold on to in an attempt to displace the memory of last year's unfortunate Broadway production, which had audiences laughing at inappropriate moments. It was like Streetcar, the Comedy, and it was not good. The concept was a good one - an ethnically diverse cast - but the tone of the production was much too light. I thought perhaps it was also due to the unsophisticated audience that the TV actors on stage brought in, but I've learned from Ten Thousand Things that it doesn't matter if an audience member has never seen a play before in their life, or has seen hundreds. If you do it right - they'll get it. In addition to performing for the typical theater-goer like myself, TTT takes their shows into prisons, homeless shelter, schools, and community centers in an effort to bring theater to a wider audience. And they have a really wonderful and unique way of stripping the work down to the essentials and presenting it in a way that anyone can relate to, regardless of prior theater experience. They've done that with Streetcar, and the result is a brutally real and emotionally affecting two hours that's at times difficult to endure. Seeing Williams' tragic story so up close and personal is almost too much to bear. In other words - they did it right.

This production of Streetcar focuses on the four main characters and removes several minor characters that don't factor into the main plot. The play begins with Blanche visiting her sister Stella and her husband Stanley in New Orleans. Blanche and Stella grew up in a wealthy Southern family, but hard times have caused Blanche to lose the home place, while Stella and Stanley live in two small modest rooms. Blanche is high-strung, to put it mildly. She takes long baths and drinks to calm her nerves, and can't possibly speak about the troubles in her past. She's a woman who's all about appearances; if things look pretty and put together, then everything must be all right. Reality is much too harsh for the world that Blanche lives in. Her young husband died tragically years ago, which, along with her family's financial hardship and the deaths of her parents, sent her on a downward spiral. No where else to go, she lands with her sister, with a trunk full of pretty clothes, fur, and jewelry, mementos of her past. Blanche finds companionship with Stanley's buddy Mitch; they're two lonely people who need someone. It's the beginning of what seems like could be a quiet, simple love, as opposed to Stella and Stanley's passionate but abusive love. Stanley is suspicious of Blanche and thinks that she's holding something back. He learns some gossip about her and uses it against her. In the end, Stella must choose between her husband and her sister. It's a tragic story with no happy endings.

This fantastic four-person cast is directed by the equally fantastic Randy Reyes. All of these characters are interesting and complex, but none more so than Blanche, and Austene Van plays every layer. Blanche becomes more and more unhinged as the play goes on, and by the end, her eyes are just vacant; she's gone. Elizabeth Grullon is also great as Stella, always hot and frazzled and wanting to believe in her husband and sister both, until she has to make the terrible choice. Kris Nelson may not look like the Stanley Kowalski type, but he's got that sinister attitude in every word and look. He's one of my favorite local actors and usually has this great positive energy, but in this case he's turned that energy much darker in an almost scarily realistic way. Rounding out the cast is Kurt Kwan as the sweet and charming Mitch. All four of these actors have great chemistry with each other and play well together.

This is a fairly elaborate set by Ten Thousand Things standards. In case you've never seen a TTT show before, they create a "stage" by placing a few rows of chairs in a square. The space in the middle is where the story takes place, but it also spills outside the square as the fully lit room allows you to follow the actors as they leave the space. Dean Holzman has effectively transformed this empty square into the two rooms, with an imaginary curtain separating the tiny bed in one corner from the kitchen table in the other. Peter Vitale adds a soundtrack to the play, adding in jazz music playing on the radio or creepy carnival music when Blanche remembers her difficult past.

The last several shows that TTT has done have been on the more light-hearted side, which allowed the cast to play with the audience a little. But not so with Streetcar. The actors keep the intensity of the story and reside in the world they create, as if the audience isn't even there. Not since Doubt two years ago (also starring Kris Nelson) have they tackled such a serious drama. As always, I highly recommend that you go see it. I went with a friend who had never seen TTT before, and we're already talking about getting season passes next season (which includes A Midsummer Night's Dream, The Music Man, and a new play by Kira Obolensky). Warning: the kind of real, raw, intimate theater that Ten Thousand Things does can be addictive.