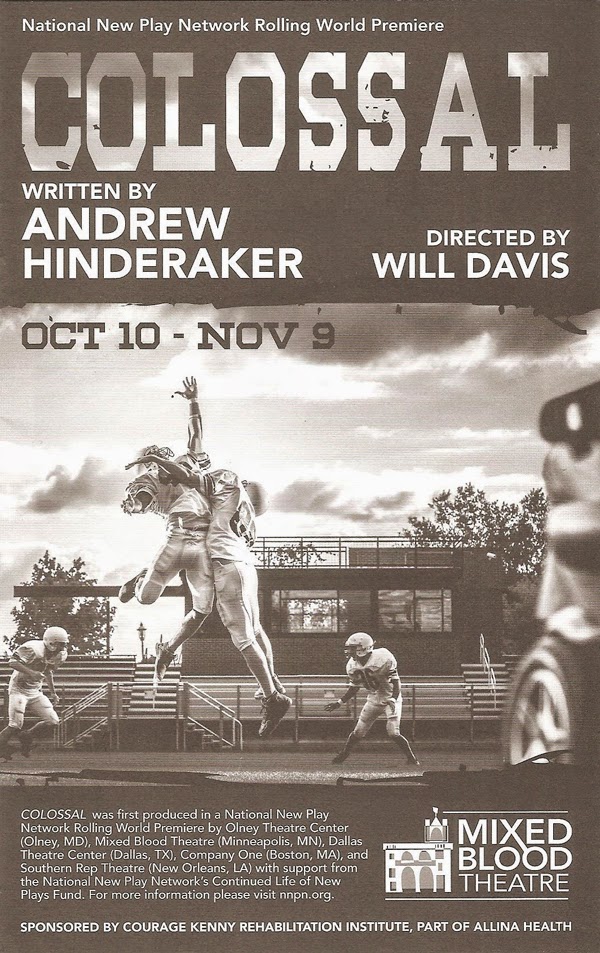 "Clear eyes, full heart, can't lose." The excellent TV series Friday Night Lights is about all I know of football, and all I care to. But I still went to Mixed Blood Theatre's football-themed play Colossal, partly because I thought I heard rumors of a marching band (wrong, no band, just a three-person drumline), but mostly because it looked intriguing. Like Friday Night Lights, there's much to enjoy and appreciate about Colossal even for those of us who don't like football. Also like Friday Night Lights, the plot centers around a star player who was paralyzed during a game. It's a powerful story, beautifully told, with great innovation in the timing of the play and in the feats of athleticism on display. In fact it's so good, it almost made me like football, and that's saying something.

The audience is seated five minutes before game time, I mean showtime, with the sound of the drums and the football players' pre-show cheers. Mixed Blood's black box theater has been turned into a mini football field, with bleacher seats for the audience. Before the show, coach Stephen Yoakam puts eight strong, fit, athletic young men through a series of drills - catching, blocking, running - while an older man does yoga. For the first time I appreciated the athleticism of football; it's really quite beautiful in its own way, like a kind of a dance. The pre-show gives way to the start of the play, which is structured as four 15 minute quarters, with the time counted down on the scoreboard. One of the most remarkable things about this production is that the scenes end exactly on time. If they go too fast, there's dead air while we wait for the clock to run down. Too slow and they run out of time. But that never happened. And despite the short run time and the presence of the ticking clock, nothing feels rushed, there are still quiet moments of stillness filled with emotion. The logistics of the whole thing work like clockwork, but the artistry of the story is never sacrificed.

And the story that is told is beautiful, poignant, and tragic. In dueling realities, we see Mike after his accident (quadriplegic actor Toby Forrest, in a moving and heartfelt performance) and young Mike pre-accident (Torsten Johnson, full of energy and brash confidence). Young Mike appears like a devil on Mike's shoulder, keeping him from moving on and healing from the hurt. In addition to the physical injury, Mike is also hurting from a broken heart; he was in love with one of his teammates (like if Jason Street were in love with Smash), who hasn't come to see him since the accident almost a year ago. Mike's dancer father (the yogi, gracefully played by David Deblieck) doesn't know how to help him, and his physical therapist Jerry (the always excellent Ansa Akyea) tries, but Mike isn't willing. He continually watches a tape of his accident, as the football players and young Mike reenact it for us, pausing as Mike presses pause on his remote, unwilling to go past the impact to what happens next. Memories of Marcus (a charismatic Darius Dotch) and the relationship they had also hold him back. Over the course of an hour (unlike a football game, it really does only last an hour), Mike works to let go of the hurt so he can move forward with the life he has now.

Many artforms combine to create a truly innovative piece of theater. The drumline provides the soundtrack for the drills and game scenes. A beautiful dance entertains us at halftime, performed by Mike and his dad along with a troupe of dancers. The actors playing Mike's teammates run around the stage like athletes, and look like real football players in a real practice (at least to my football-ignorant eye). The entire theater has been transformed, from the set to the bleacher seats to the ushers in football jerseys. All woven together with a beautiful script by Andrew Hinderaker (who wrote this play in response to an "unproducible play" challenge) and smoothly brought to life by director Will Davis. There's a palpable energy in that room that's quite different from anything I've felt at the theater before.

I'm apparently one of the few Americans who doesn't like football (I haven't attended a game since high school, when I was forced to because I was in the marching band, hence my hope to see a marching band at halftime). But this play isn't about football. It's about a passion for something you love and sacrifice everything for, family that supports you no matter what, falling in love and making stupid decisions because of it, getting stuck in the past and having the courage to move past it, letting go of what was and embracing what is (aka "no day but today").

Don't expect to see me at a Vikings game anytime soon (or ever), but I do have a greater appreciation for the sport of football and its place in our culture, as well as the damage that it can cause. Whether you like football or not, head to Mixed Blood Theatre between now and November 9 to experience some truly unique theater. And you can't beat the price - all tickets at Mixed Blood are free thanks to their Radical Hospitality program (although donations are accepted, and advance reservations are $20).