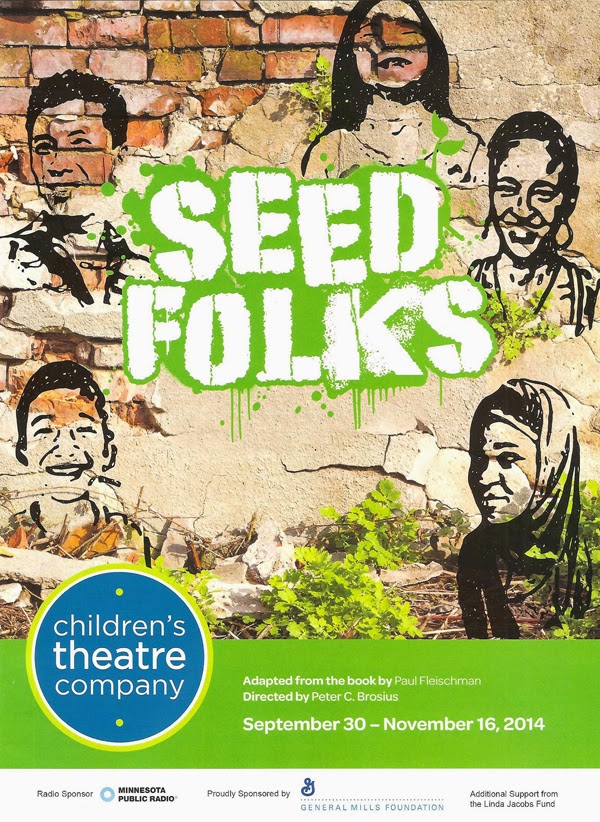 "Never doubt that a small group of thoughtful, committed citizens can change the world." This Margaret Mead quote (which continues, "indeed, it's the only thing that ever has") greeted me upon exiting the theater after seeing Children's Theatre Company's Seedfolks. I don't know if this quote is always in their lobby, or if it's specific to this show, but it is the perfect summation of this beautiful play. Paul Fleischman's 1997 novel tells the story of a vacant lot in Cleveland being transformed into a community garden from the perspective of multiple different characters. In CTC's adaptation,* all of these characters and more are portrayed by one woman - Sonja Parks. She brilliantly transforms from a young Vietnamese girl, to an elderly Romanian woman, to a Guatemalan boy, and everything in between in the course of just over an hour. It's an epic journey of a neighborhood that transforms from one of fear and distrust to one that, while it might still have those things, is more deeply connected and supportive, all due to the growing of plants. A small group of thoughtful, committed citizens change the world, or at least their small corner of it.

The journey begins with a nine-year-old Vietnamese girl who, in memory of the farmer father she never knew, decides to plant a few dried lima beans in a vacant lot strewn with garbage. Others in the working-class, mostly immigrant neighborhood take notice of this little girl and her growing plants, and decide to join in. Some miss the feeling of growing something in the ground that they had in the old country, some want to earn money for college, some want to impress a girl, some need to heal from a past hurt, some just like bringing people together. One woman lobbies the city to remove the garbage from the lot, making more room for plants to grow. At the end of the summer, when the harvest comes in, the community joins together to celebrate, sharing food, music, and stories. Then winter comes, the plants die off, snow covers the garden, and everyone retreats into their individual homes (sound familiar?). But when spring returns, will the garden, and with it, the community?

Sonja Parks gives a brilliant performance in this one-woman show, playing over a dozen characters of varying age, gender, and ethnicity. Under the direction of Peter C. Brosius and with help from dialect coach D'Arcy Smith, she makes each character a distinct and specific fully formed person, from a grieving little girl, to a wounded woman, to a swaggering young man, to a strong mother and teacher, to an excited boy. I only wish the play were longer so we'd have more time to spend with each of them. Lighting changes help distinguish scene and character, and video projections on three long narrow screens provide the backdrop on the simple set (set and projections designed by Jorge Cousineau). The almost video game-like animation is sure to appeal to pre-teens and teens, and really makes the neighborhood come alive (although if you're prone to motion sickness, like me, you might have to close your eyes during some of the moving sequences).

This is different than any other CTC show I've seen, which granted has not been many. It's not a big, splashy, colorful, fun musical. It's more quiet and intimate, but just as mesmerizing for older kids and adults (recommended for grades 3-8, you might want to leave the squirmy little ones at home, or take them to the other show playing at CTC right now, Busytown the Musical). Head to the Children's Theatre between now and November 16 to see this beautiful inspiring story brought to vivid life by Sonja Parks (Aimee Bryant will take over the role on November 7, and is sure to bring her own wonderful spin to the characters).