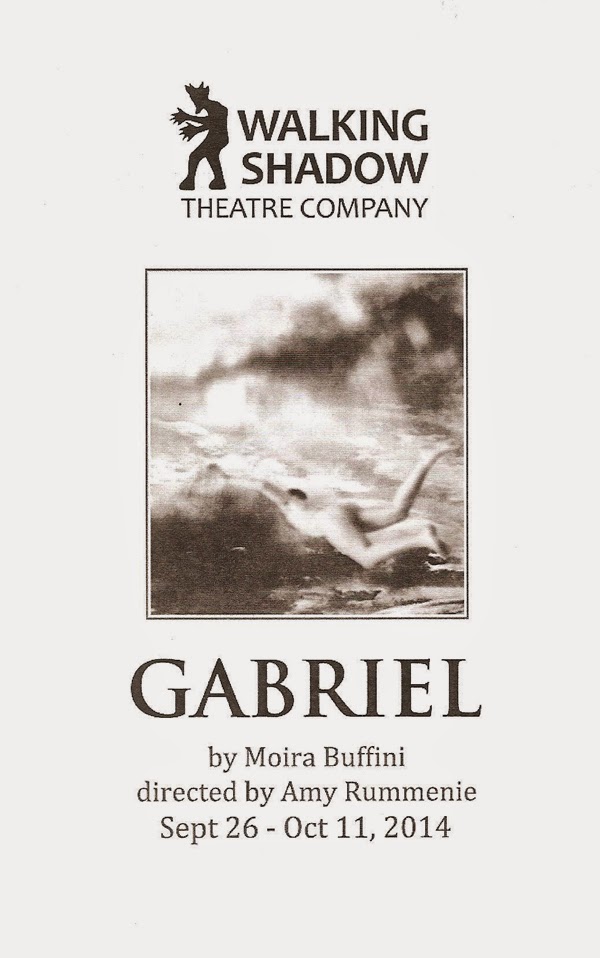 As I left the theater yesterday afternoon, I clutched my sweater close around me to ward off the chill. Not the chill in the crisp fall air, but the chill from the play I had just seen - Walking Shadow's Gabriel. This story about a little known facet of WWII history is so captivating, horrifying, chilling, and completely engaging that it hangs with you well after you leave the theater. The excellent cast and realistic set make you feel like you're right there, as this family fights for survival on a Nazi-occupied British island. It's only playing for one more weekend, but it's well worth it if you can make it. You won't soon forget this beautifully done, powerful play.

It's 1943 on the island of Guernsey, a British Island just off the coast of France. After the British troops abandoned it and much of the population fled to England, the Germans occupied it without a fight, leaving the remaining population to live under their rule. They've watched their homes and cities be taken over by the Nazis, with rumors of "camps" striking fear into their hearts. One particular family, consisting of the widow Mrs. Becquet, her young daughter Estelle, her secretly Jewish daughter-in-law Lily (son Miles is a pilot in the British army), and their housekeeper Mrs. Lake, has recently moved out of their home, which is now serving as a barracks for the German soldiers, and into a small cottage. They do what they can to survive, including selling food on the black market and Mrs. Becquet making nice with the officers. Two things threaten this delicate balance - the arrival of a new Nazi commander, von Pfunz, who is smarter and more vicious than he seems, and a naked and unconscious young man washed up on the beach, whom Lily brings home. The mystery of just who this young man is, whom they call Gabriel, lingers throughout the play. In fact we never find out for certain who he is, but his presence changes things for everyone involved. Estelle thinks he's an angel who has come to save them from the Nazis, Mrs. Lake calls him "my boy" and tenderly cares for him, Lily sees in him the husband gone so long she can barely remember him, Mrs. Becquet finds him a dangerous nuisance and wants him out of her house, and von Pfunz suspects he's a German due to his fluent speech (there are several conversations in beautiful German). What enfolds as Gabriel tries to remember who he is and Mrs. Becquet tries to save her family from the evil von Pfunz will keep you on the edge of your seat.

There is not a weak link in this excellent six-person cast, beautifully directed by Amy Rummenie. Katherine Kupiecki is the proud and haughty Mrs. Becquet, who may not seem like the best mother but will do whatever she has to to protect her family, however distasteful. Janet Paone is a welcome comic relief as Mrs. Lake, who's as much a part of this family as any of them. Miriam Schwartz brings both strength and vulnerability to the role of Lily, who sees something in this strange young man, portrayed by Ross Destiche as a lost soul with innate goodness in him. Wade A. Vaughn gives yet another brilliant and fully committed performance as the Nazi commander von Pfunz, an evil, twisted, disturbed man, outwardly charming, quietly threatening, and a menace to them all. Last but certainly not least is star in the making Lily Wangerin, who can't be more than ten years old but holds her own with these professionals. Adorably precocious and spirited, she's so present and engaged in every moment, and impressively goes toe-to-toe with Wade in an intense interrogation scene. It's a heavy play and a large role for a little girl, and she handles it gracefully. The entire cast works and plays together very well, and has a great chemistry. Their playground is the realistic and detailed cottage set by Steve Kath, including a kitchen with working sink, stocked pantry, and stove, and an attic bedroom.

Head to the Theatre Garage this weekend for one of the four remaining performances of Gabriel to see this chilling, mesmerizing, beautifully acted play. It's a bit long at nearly three hours with intermission, but it doesn't feel long; every moment is captivating and gripping. It's just devastating, and truly one of the best plays I've seen recently.