"Dirty Dancing" at the Orpheum Theatre 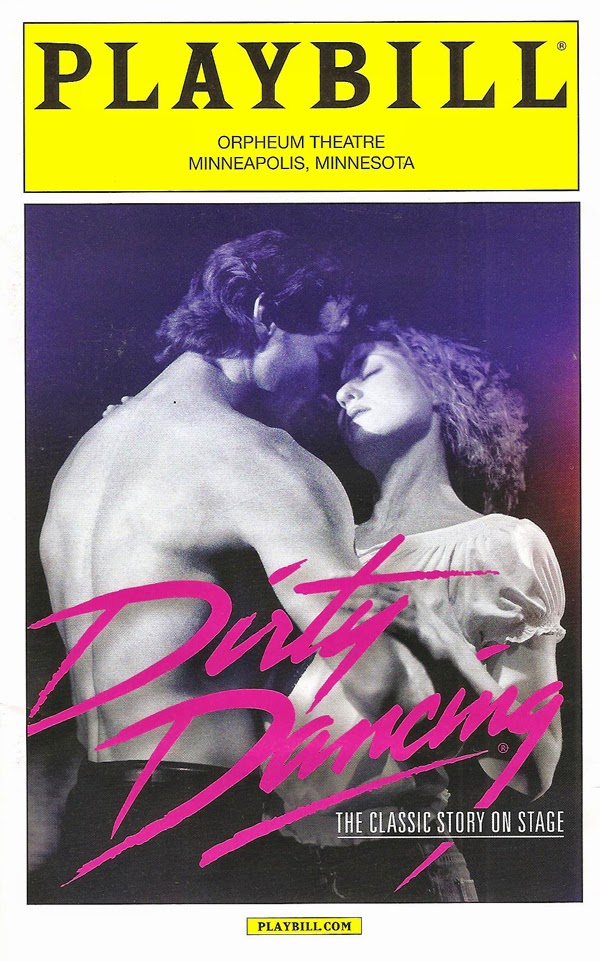 Full disclosure: Dirty Dancing is one of my favorite movies. Like most teenage girls in the late '80s, I fell in love with this story of dance and love and growing up the first time I saw it, and I longed to be Baby. Now, more than 25 years and multiple viewings later, I still love the movie and am instantly taken back to that feeling the moment I hear any of the songs from the awesome soundtrack, an odd mix of '60s pop tunes, Latin instrumentals, and '80s songs (which I own, along with a DVD of the movie). When I heard that there was a stage show of the movie, I was concerned. Why mess with perfection? But I had to see it for myself, so I went to the show, along with another fan of the movie, and we loved it. I was worried that they would turn it into "Dirty Dancing: The Musical" with a bunch of cheesy new songs, and Baby and Johnny singing earnestly to each other. Thankfully that's not what this show is. Instead it's a faithful recreation of everything we love about the movie, translated to the stage. If you're not a fan of the movie, there's probably no reason for you to see this show. But if you, like me and countless women of my generation, love this movie, you might enjoy getting to experience all of the music, dancing, and passion of the original as performed live by a talented cast of dancers, actors, and singers.

I'm going to forgo my usual plot summary, because if you don't know the movie, you don't need to see this show. Just scroll down the page and pick one of the other amazing (local, original) shows going on in this town. But for those of you who do know and love the movie, rest assured that all of the best lines are here, from "I carried a watermelon" to "nobody puts Baby in a corner." It's kind of amazing how faithfully they've recreated all of the iconic scenes, using video projections against slatted wooden blinds to provide the various backdrops, indoors and out. But it shouldn't be surprising since Eleanor Bergstein adapted her own screenplay, which was loosely based on her experiences at a resort in the Catskills. We see Baby's first exposure to the Kellerman's staff party, the balance and lift practice on a log and in the water, "most of all I'm scared of walking out of this room and never feeling the rest of my whole life the way I feel when I'm with you," Baby and Johnny crawling across the floor lip synching to "Love is Strange," Baby's conversation on the porch with her father, Baby's sister Lisa's awkward hula song, and of course, the final dance. I really wanted Johnny to jump off the Orpheum stage, I wanted Baby to run down the aisle to him for the big lift, I wanted all of the dancers to come out into the audience and pull us (me) to our feet to dance with them in one big final dance party. Sadly that didn't happen (probably due to safety and viewing concerns, whatever) but I was satisfied with the recreation of it on stage. This is a movie that gets into your very bones, and the stage show did that for me as well.

According to the Cherry and Spoon Music-Theater Spectrum* this is not a musical, it's a play with music. Songs from the movie, plus some additional ones that they were unable to get the rights to at the time, are all in their right places, either with the original recording played, or more often as performed by the fantastic on-stage band. There were moments when the music swelled and I was afraid someone would break out into song (please, don't make Johnny sing "She's Like the Wind"), but thankfully that never happened. The characters do not sing; the singing is left to a few singers - Jennlee Shallow, Jerome Harmann-Hardeman as Kellerman singer Tito Suarez, and Doug Carpenter, who out of nowhere brought the house down with a gorgeous rendition of "In the Still of the Night." Jennlee and Doug create a beautiful duet on the show's theme song "I've Had the Time of My Life."

As expected in a show with the word dancing in the title, the dancing is the definite highlight of Dirty Dancing. Some of the acting and scenes are so-so, but the dancing scenes are perfection. All of these dancers are phenomenal, and many of them are trained ballet dancers. Choreographer Michele Lynch has recreated much of the original choreography in the movie (by Kate Champion). The dancing is iconic, and Dirty Dancing wouldn't be Dirty Dancing without it. This is the kind of show that makes me want to take dance lessons. I want to mash potatoes, I want to do the twist, I want to do a crazy backbend.

It's an impossible task to step into the shoes of Jennifer Grey, Patrick Swayze in his most memorable role, and Broadway legend Jerry Orbach. The cast does a fine job, but I'm not going to compare them because that would be unfair; of course no one can play those roles better than the originals. That being said, Jillian Mueller is a perfect Baby, aided by the curly hair, but more importantly she has the combination of naivete, idealism, and fierce determination to save the world. In the all important role of Johnny Castle, ballet dancer Samuel Pergande is beautiful and dances like a dream, even if I might have wanted a little more emotion in some of the non-dancing scenes. Emily Rice is a scene-stealer as annoying Lisa, and has all her awkward movements and self-centeredness down pat.

It's important to note that the subtitle of Dirty Dancing is not "the musical," which would most likely be horrific, but "the classic story on stage." There's nothing original or innovative about it (except maybe in the way that they make these filmed scenes in various locations work on stage), but it's true to the source. And those of us who love the movie are grateful. Why leave your house and pay the not cheap ticket price when you can watch the movie in your living room? Because there's something about live performance, even or maybe especially of something familiar, that's thrilling. There's wonderful energy on that stage and in that room, and seeing this beloved story come to life before your eyes is a joy. Dirty Dancing fans - make your way to Minneapolis' Orpheum Theatre, now through October 19. Everyone else, just go about your business and let us have our fun.


*The Cherry and Spoon Music-Theater Spectrum (TM pending): in a musical, characters sing in character, expressing their emotions and moving the plot forward. In a play with music, the music takes place in context, with characters singing in a way that would make sense in real life, and don't sing as the character. If you take the music out of a play with music, it still makes sense, although some of the impact is lost. If you take the music out of a musical, the story no longer makes sense.