"The House on Mango Street" at Park Square Theatre 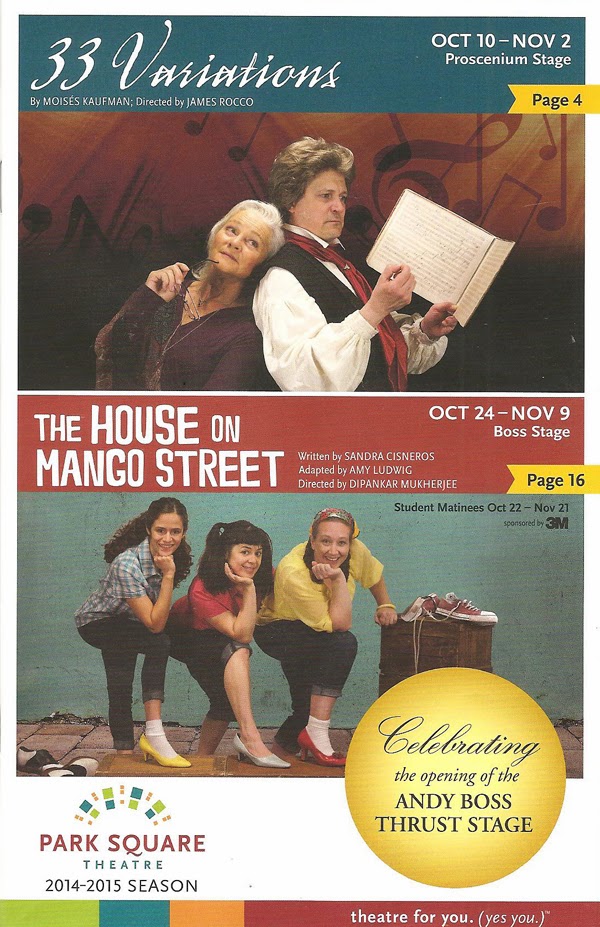 It's finally here! Park Square Theatre's long anticipated and planned for second stage opened this weekend. It's great to have another theater space in St. Paul after the Ordway's McKnight Theatre was demolished to make room for their new concert hall, opening in March. Park Square's new space in the bowels of the historic Hamm building in downtown St. Paul is cozy and intimate, separated from their original stage by a stairway and a long hallway. It has its own lobby, ticket office, concession stands, and bathroom, and can be accessed either through the main Park Square lobby on 7th Place or through the Hamm lobby on St. Peter. The stage itself is a three-sided thrust stage that offers nice views from all sides (with exception of the two large pillars at the front corners of the stage that can cause some obstruction to seats in the corners). The inaugural production, The House on Mango Street, is a perfect example of what Park Square is hoping to do with the addition of the new stage - increase engagement of young people (several weeks of student matinees are offered), share more diverse stories (a Latina coming of age story), and bring in more theater artists from around the community (director Dipankar Mukherjee and the entire cast are making their Park Square debuts).

The House on Mango Street is based on the 1984 novel of the same name by Mexican-American writer Sandra Cisneros, inspired by her own experiences growing up in Chicago. Like the novel, which Wiki tells me is a series of vignettes, the play does not present a linear plot, but rather a series of scenes depicting the main character's experiences with her family, school, neighbors, and friends. Playwright Amy Ludwig has adapted the novel, keeping much of the poetic language and narrative style of the book. Characters speak "he said" and "she wondered," as they simultaneously act out the descriptions. The main character is a charming and adventurous young girl named Esperanza, seen both as an adult reminiscing about her youth, and the child Esperanza as she lives the things she's describing. The two take turns narrating, sometimes interacting with each other. Esperanza and her family move into a house on Chicago's Mango Street which is nicer that the other places she's lived, but not as nice as she hoped it would be. Esperanza experiences many of the joys and troubles of growing up, making friends, testing boundaries, her first dance, death and grief, learning to walk in high heels, and men's reactions when she does. She deals with everything by writing, carrying a little notebook around in her bag and constantly pulling it out to jot things down. Somehow she knows that this will be her way out of Mango Street, although she eventually comes to learn that she'll never leave for good, and doesn't want to. She "leaves only so that she can come back."

The two Esperanzas are brought to life by two talented actors, representing two versions of the same person. Adlyn Carreras plays the older incarnation with an air of nostalgia as she looks back with the perspective of an adult. As the younger Esperanza, Alejandra C. Tobar convincingly plays this energetic, curious, smart, open-hearted, growing girl. She's a likeable and relatable heroine; when she laughs you can't help but smile, when she cries it'll break your heart. The six-person ensemble ably transforms into numerous characters, from young children to the old and dying, from nuns to criminals, and everything in between. A quick change in costume (designed by Trevor D. Bowen) helps to differentiate the characters. The set by Seitu Jones makes good use of the space - with raised platforms representing the houses along Mango Street, and no walls to obstruct views.

The House on Mango Street is a poignant and sweet coming of age drama. Even though it deals with a specific culture and place, the experiences of childhood and growing up depicted are universal (I was taken right back to my childhood with the Tootsie Roll jingle, a song I didn't even know I knew). Evening performances conclude on November 9, while student matinees continue through November 20. See the Park Square website to learn how your school or students can attend a performance.