"The Cocktail Hour" at the Guthrie Theater 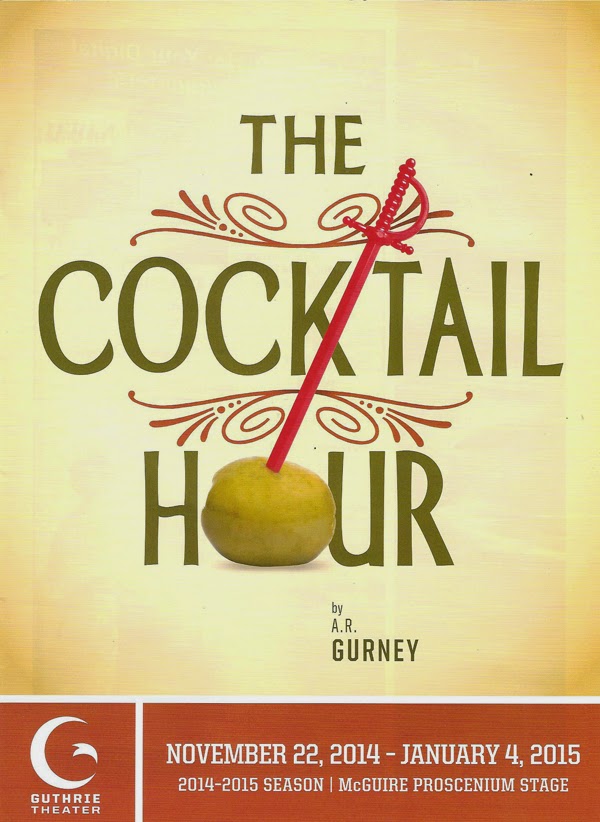 If the Guthrie's annual production of A Christmas Carol is too schmaltzy and feel-good for you (a show I called the feel-goodiest of feel-good shows), then head across the hall to the McGuire Proscenium Theater. Playwright A.R. Gurney's "most personal" play The Cocktail Hour is perhaps a bit more like what most of our family gatherings are like. This look at the WASP culture of the Northeast and what happens when a son tries to break out of it is sharp, funny, poignant, and well-acted by the four-person cast.

Playwright John returns to his parents' upstate New York home to share with them his newest play. While his other plays may have included a reference or two to his family, this one is very closely based on his family life, and he wants his father's approval. Which of course, he doesn't get. Bradley and Ann live a perfectly distinguished and structured life. A lifestyle that, by the mid '70s, is fading thanks to "the war" and "your friend Roosevelt." Ann jokes that people think WASPs are all Republicans, superficial, and alcoholics - only the last one is true. Every evening before dinner the family gathers for cocktail hour, a chance to unwind, converse, and smooth things out ("we're never too busy for the cocktail hour"). John can't understand why his parents still cling to these old customs and ideals in the changing world. He uses his plays to work through his feelings about his parents and the fact that he's never felt love from his father, who dotes on youngest son Jigger (if you have a son named Jigger, you might be a WASP). His father doesn't want the family embarrassed by the play, which is also titled The Cocktail Hour, and his mother thinks he should put it in a book instead, because it's less public. Only daughter Nina arrives for cocktails and dinner, and is disappointed that she doesn't play a bigger role in play, expressing discontent with her seemingly perfect life of husband, home, and family.

This all leads to some heated and intense discussions over cocktails as dinner is delayed, some of which is quite hilarious to watch from the comfort of the theater seats. But they also dig into some very real and relatable issues, especially for families of this era. In addition, it's a bit of love letter (to use the title of one of Gurney's other plays, a running joke in the show) to the theater. Ann and Bradley lament the great plots of plays of old, while John feels cursed that the only thing he feels compelled to write is plays, a dying and archaic artform (insert audience chuckle). Theater is changing, as is the life Bradley has lived for over 70 years, and he makes sure everyone knows how unhappy he is with it (although he does have a good point that "no one likes a long play, they want to get it over with and go home to bed").

Director Maria Aitken (making her Guthrie debut) strikes just the right tone with her excellent four-person cast (an equal mix of Guthrie vets and newbies) - biting and funny with real moments of poignancy as the family digs deep into their issues. Peter Thomson and Kandis Chappell are just perfection in their roles as Bradley and Ann, both so comfortable with their characters and each other, creating real people that are somehow endearing despite their faults. As John, Rod Brogan plays the right mix of exasperation at his parents and hidden desire for their approval, and Charity Jones is the typical Daddy's girl who's less warm with her mother.

James Youmans has designed a beautiful set (with a few surprises), a meticulously arranged upper class living room that's clinging to the past and shows no sign of the '70s. Robert Morgan has attired Bradley and Ann in a perfectly WASPish wardrobe, featuring Bradley's neat bow-tie and Ann's elegantly draped cardigan, while their children are allowed more relaxed and modern apparel.

The Cocktail Hour is a perfect complement or antidote to A Christmas Carol, and shows the other side of family love - the real life side. Grab a cocktail and settle in for a funny and not too long play, with not much of a plot but plenty of character (playing now through January 4).

Now if you'll excuse me, I need to go make myself a cocktail.