"On Golden Pond" at The Jungle Theater 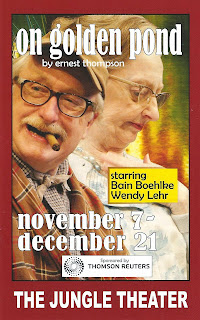 This is Bain Boehlke's last full season as Artistic Director of The Jungle Theater, which he co-founded in 1991 (he will retire next summer). For the final production of the 2014 season, he has chosen the beloved American classic On Golden Pond, which was made into an equally beloved 1981 movie starring Katherine Hepburn and real life father/daughter team Henry and Jane Fonda. In a final trifecta, Bain has directed the show, designed the set, and stars as loveable curmudgeon Norman. It's a sweet, funny, beautiful triumph. Nothing showy or flashy or over-the-top, rather a lovely and quiet exploration of relationships and life.

On Golden Pond centers on Norman (Bain Boehlke) and Ethel (Wendy Lehr), who have summered together on Golden Pond in Maine for 48 years. It's a quiet and simple life, kept busy with picking strawberries, fishing, playing Parcheesi, and talking to the loons. Their only visitor is mailman Charlie (E.J. Subkoviak), who stops in for coffee when delivering their mail by lake. Their daughter Chelsea (Jennifer Blagen), who has always had a strained relationship with Norman, shows up with her fiance Bill (Michael Booth) and his son Billy (Peder Lindell). The boy ends up staying for a month, and he and Norman become fast friends. Chelsea suspects he's like the son that Norman always wanted her to be. We witness the course of the summer, from opening up the cabin and settling in, to packing up and heading back to city life. Having just turned 80 and suffering from heart palpitations, Norman talks as if he has one foot in the grave, which annoys and frightens Ethel. When the play ends, we're not sure if they'll return to Golden Pond next summer, or if we've just witnessed Norman and Ethel's last summer on their beloved lake. But all in all they've lived a good and happy life, if not perfect, and we can be certain that they'll enjoy whatever time they have left, whether it's 10 more days or 10 more years.

Everyone in the cast does a fine job, but On Golden Pond is all about Ethel and Norman, and Wendy and Bain are perfection. Their decades of friendship and collaboration are evident in the very real and natural relationship between Norman and Ethel. Bain physically inhabits the role of Norman with a slow and deliberate gait and labored breathing, but an internal fire as he verbally challenges everyone he comes up against, while still showing occasional glimpses of vulnerability. Wendy's Ethel has the busy energy of a retired woman with things to do, who loves her family wholly. She calls Norman a nitwit and "you old poop" with great affection. Watching these two local legends (both have Ivey Lifetime Achievement Awards) is a true pleasure. I had a smile on my face throughout the show and tears in my eyes at the end.

As always at the Jungle, the set is a perfect representation of the story. The cozy cabin is packed with books, photos, tchotchkes, games, blankets, and hats, like an actual cabin that has been lived in and loved for 50 years. It's a place I'd love to spend the summer, a place that feels familiar to anyone who has a summer retreat. The costumes (by Annie Cady) are vaguely '70s, especially with the younger set, but in an unobtrusive way. Ethel and Norman's clothes look comfortable and lived-in. The sideburns, bell bottoms, and phone operator are the only things that make this seem like a period piece; otherwise it could be happening on any lake in Minnesota or elsewhere.

On Golden Pond continues through December 21, so you really have no excuse not to head to this lovely little Uptown theater to see it. It's a great example of the quality theater that the Jungle has been producing for over 20 years under Bain Boehlke's leadership, that will hopefully continue after his tenure concludes next year. But for now, take this opportunity to watch a couple of legends in a beloved American play. You won't soon forget it.