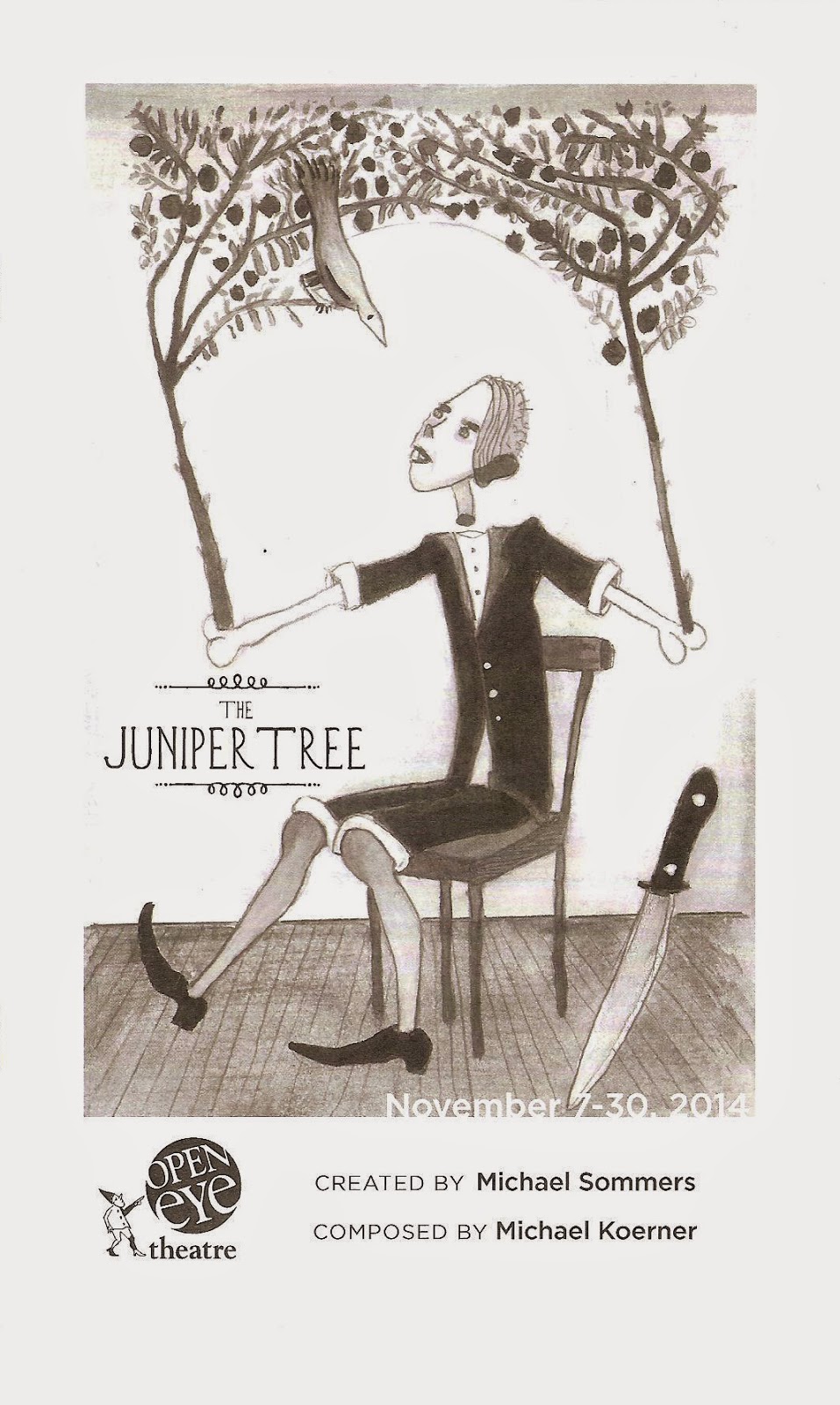 Open Eye Figure Theater is in its 15th season, but surprisingly, I had not experienced their unique brand of theater until last night. I have been to their charming theater space on 24th Street just off 35W several times for other theater productions, but not to see one of their own shows. It's well past time that I remedy that glaring omission in my Twin Cities theater experience. With their adaptation of the Brothers Grimm fairy tale The Juniper Tree, I see what I've been missing at Open Eye, which "creates original figure theatre, animating the inanimate on an intimate scale." And that is delightful, whimsical, quirky, charming, engaging theater that combines multiple art forms including puppetry and original music to tell a story.

The Juniper Tree is not one of the Grimms' more well-known fairy tales; surprisingly, Disney has yet to make a movie about this stepmother who kills and cooks her stepson, feeds him to his father, and then is killed by a millstone dropped by the boy in bird form (Wikipedia offers a nice plot summary if you'd like to familiarize yourself with the story beforehand). Director/adapter/designer Michael Sommers and the team at Open Eye have taken this dark and disturbing tale (as most fairy tales are before being Disney-ized*) and turned it into something light and sweet and fun, although still with that undercurrent of darkness.

It seems like there are more than just six people on the tiny stage, playing all the characters and manipulating things behind the scenes. It's all perfectly timed and well choreographed, as puppets and humans interact almost like magic. Two of the onstage actors also play in the six-piece orchestra, playing delightfully whimsical original music by Michael Koerner. It's sort of all hands on deck as people smoothly transition from the orchestra to the stage to backstage puppeteering and back again.

I'm no expert on puppets, but these are really beautiful, or scary, or silly, depending on what is called for. There is a puppet of the titular tree, which moves like a living thing in the small stage space behind open doors, creating strikingly beautiful images as smaller versions of some of the characters dance among the branches. An almost lifesize boy and girl puppet interact with the human father (a jolly Julian McFaul) and stepmother (Robert Rosen, so loose and playful with the audience), who are just slightly too big for the charming cottage set with various opening doors and windows, creating an interesting juxtaposition. Puppeteers Liz Schachterle and Justin Spooner bring the girl and boy to life, and also pop up in human form, while Tara Loeper sings hauntingly as the boy's bird spirit.

If you've never experienced the unique wonder that is Open Eye Figure Theatre, The Juniper Tree is a great place to start. Innovative storytelling at its best, using multiple art forms that come together to create something truly unique.

*For another look at how Disney the fairy tales wrong, go see Disenchanted, in which Disney princess tell the real story to hilarious musical effect.