"Hauptmann" by Candid Theater Company at the People's Center Theater 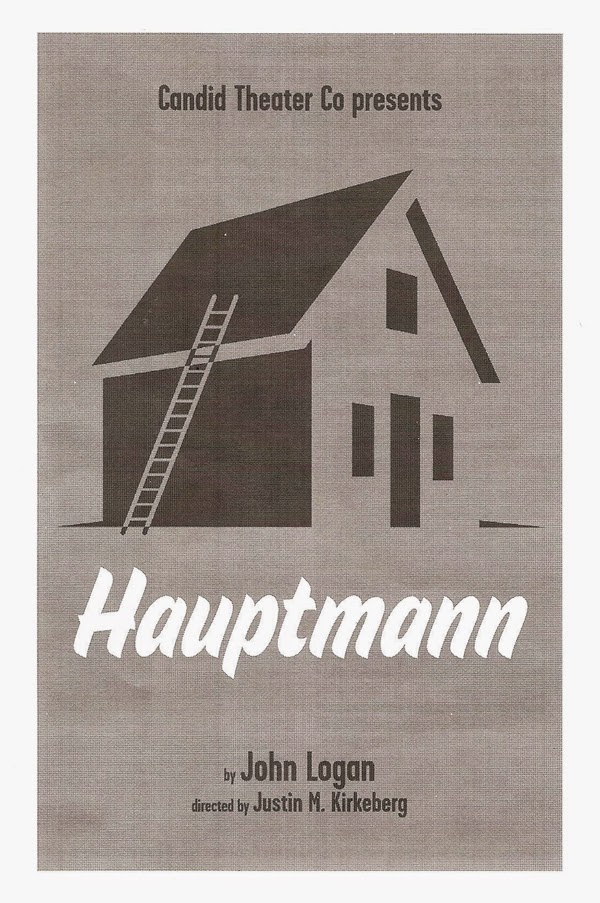 The kidnapping of the son of famed aviator Charles Lindbergh in 1932 was headline news across the country and caused a media sensation. Eighty years later, the "crime of the century" is still a fascinating story and a bit of an unsolved mystery. Last year the History Theatre produced a fantastic musical Baby Case about the kidnapping, investigation, and media frenzy. Playwright and screenwriter John Logan (see also the multi-Tony-winner Red) wrote a play about it from the point of view of the man accused, convicted, and executed for the crime, Bruno Richard Hauptmann. Candid Theater Company's current production presents a fascinating and compelling drama with the barest of sets and costumes and a cast full of new young talent.

The focus of Hauptmann is not Mr. and Mrs. Lindbergh, whose child was stolen and murdered, but, as the title suggests, Hauptmann himself. He tells his story directly to the audience from his prison cell where he's awaiting execution. He narrates his story from his arrest two years after the crime, through the brutal interrogations, through the trial with resources and public opinion in the Lindberghs' favor, to his almost predetermined conviction. He never wavers in his insistence of his innocence, as the real Hauptmann never did. Someone needed to pay for the "crime of the century" to put the watchful nation at ease, and Hauptmann did. The possession of some of the ransom money, which he says he got from a friend, handwriting experts who testified to the similarity between his writing and the ransom notes, and wood experts who insisted that the wood from the ladder found at the scene of the crime matched wood in his attic was enough to convict him. History is undecided about whether or not Hauptmann was guilty of the crime, but this play leaves no doubt that he was the innocent victim of circumstance and the public and law enforcement's desperate need for a conviction.

Director Justin Kirkeberg tells the story efficiently with simple costumes, minimal sets (just a cot and a few chairs), and his seven-person cast, several of whom are new to the Twin Cities theater scene, with no a weak link among them. Aaron Henry plays the title character and rarely, if ever, leaves the stage as he guides the audience through the story. His Hauptmann is a sympathetic man, an average Joe caught up in a whirlwind, but who eventually shows his anger and frustration that no one believes him. The rest of the cast all play multiple characters, from nameless police and guards to the other personalities in the story. Jonathon Dull's Lindbergh is a strong and elegant man, desperate to find answers for his wife. As Mrs. Lindbergh, Kate Zehr is the picture of a grieving mother. Kevin Fanshaw plays four different witnesses, never getting up from the witness chair but managing to create four distinct personalities in a short period of time. Matt Saxe is the cruelly efficient prosecuting attorney, relentlessly badgering Hauptmann until he gets the answers he wants. Rounding out the cast is Elohim Peña as multiple characters including the judge, with a nice array of accents.

The American public has always been obsessed with true crime stories, and the Lindbergh baby kidnapping is one of its earliest obsessions. Hauptmann shows us the other side of the story, the possibly innocent man who was sacrificed to create a satisfying end to the story. Candid Theater Company's well done production of John Logan's compelling story continues through November 23 at the People's Center Theater on the U of M's West Bank campus (discount tickets available on Goldstar).