"A Christmas Carol" at the Guthrie Theater and Lyric Arts 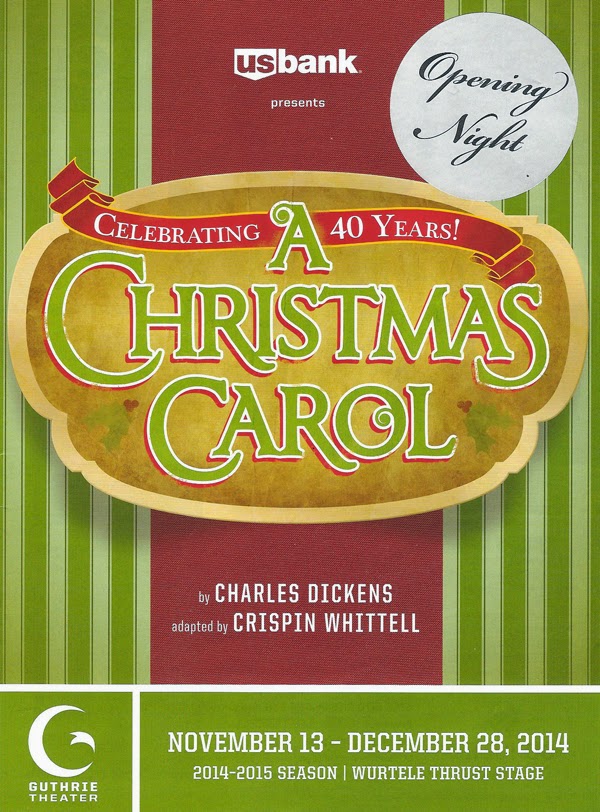 Charles Dickens' novella A Christmas Carol has become a staple of holiday traditions. It shouldn't be surprising, then, that this classic story can currently be seen on multiple stages* in the Twin Cities. The biggest of these is the Guthrie Theater; this is the 40th year that the Guthrie has produced A Christmas Carol (I have seen one quarter of those productions). I think it's safe to say this is one of their most popular shows every year, with many families incorporating it into their annual traditions. Lyric Arts is also producing the show on their Main Street Stage in Anoka. I was lucky enough to see these two different interpretations of this classic story on back-to-back nights. And while I do have a clear favorite between the two, it's really unfair to compare them too closely. Both are entertaining and creative interpretations of Charles Dickens' heartwarming story about the rich-in-money poor-in-friends businessman who learns through the visitation of four ghosts that it's better to be kind than rich. 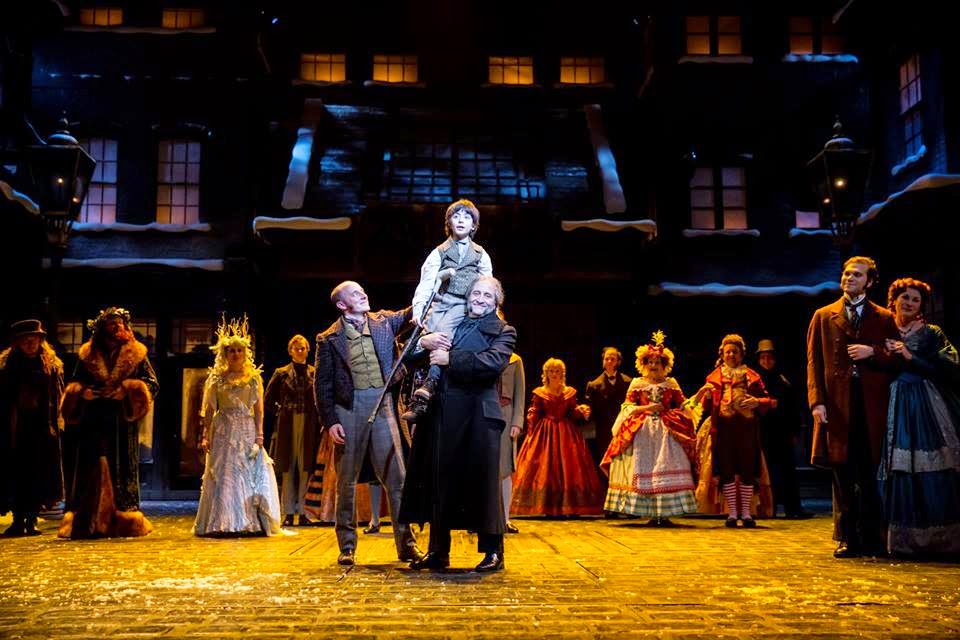 If you've seen the Guthrie's A Christmas Carol in the last few years, it's pretty much the same show. But that's not a bad thing. It's familiar, warm, and comforting, like your favorite holiday dish shared with your family. Joe Chvala returns as director and choreographer, which means there are many fun dance scenes, including one of my favorites - the Fezziwig party scene. Also returning are Mathew J. LeVebre's gorgeous Victorian costumes, Walt Spangler's elaborate moving set, and lovely renditions of traditional Christmas carols. It all looks and feels like a traditional Victorian Christmas card come to life before your very eyes.

Even though it's basically the same show every year, there are a few tweaks and cast changes to keep it interesting. One of my friends asked me what's new with the show this year, and I responded: Tyler Michaels. The My Fair Lady scene stealer makes his Christmas Carol debut in a few small but fun roles. Joel Liestman is also a newcomer to the show as the Ghost of Christmas Present, with a big booming voice both laughing and singing. Making their welcome Guthrie debuts are the charismatic Bear Brummel as Scrooge's nephew and an appealing Zach Keenan as young Scrooge. Peggy O'Connell returns to the show after a long absence as Mrs. Fezziwig, with an impish grin and sprightly spirit. Most of the rest of the cast will be familiar to those of us who've seen the show recently, which is actually a very good thing. I love seeing this beloved stage filled with so many familiar and beloved faces. There's J.C Cutler as Scrooge, making a delightful and believable transformation from grumpy to giddy; Kris L. Nelson as his beleaguered clerk Bob Cratchit, who still manages to find interesting and surprising moments after many years of playing the role; Virginia S. Burke as his devoted wife and mother to a passel of children; Angela Timberman, hilarious as ever as the drunken Merriweather; Jay Albright hamming it up in the best possible way as Mr. Fezziwig; and Tracey Maloney floating across the stage in a swirl of skirts as the Ghost of Christmas Past. This is the first time I recall young Marley and ghost Marley being played by the same actor, which is kind of genius, especially when you have a versatile actor like Robert O. Berdahl who can play the creepy ghost version as well as the living but still disagreeable version. The rest of the big Guthrie stage is filled with children and adults in all kinds of roles, over 40 people passing through that stage - so much going on and so much fun to watch.

After 40 years, the Guthrie has A Christmas Carol down to a science, with many intricate pieces - sets, costumes, music, dance, and story - all working together flawlessly. In short, if this doesn't warm the cockles of your heart, then you really are a Scrooge. It's truly the feel-goodiest of feel-good shows, and who doesn't need that at this busy and stressful time of year? Head to the big blue building on the Mississippi between now and December 28 to experience this holiday goodness. 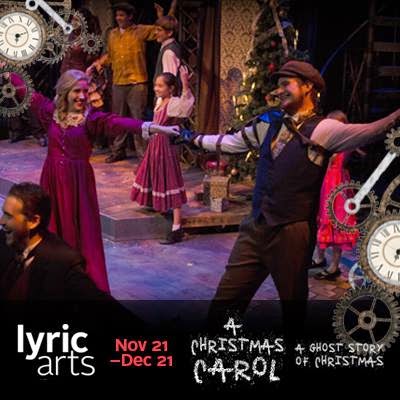 Unlike the Guthrie, Lyric Arts does not have a 40-year tradition of producing A Christmas Carol, but this year is producing a steampunk version of the classic. What is steampunk you might ask? It seems to involve a lot of gears and machinery and clockwork. And it makes for a darker, grittier, more sinister Dickensian world (although with some silly humorous moments that don't quite match the overall tone). Working from an adaptation by Michael Wilson that focuses more on the ghost aspect of the story, director Daniel Ellis and his team have created a version of A Christmas Carol that's spooky, wacky, and fun to look at, but not as warm-hearted as other versions.

There are some familiar things about this version, including a crotchety Ebeneezer Scrooge (an effective Richard Brandt) and a chorus of children, although they're a little dirtier and more ragged in this version. The Ghosts of Christmas Past, Present, and Future are played by the same actors as play people Scrooge encounters in his waking life, people who owe him money, which makes the ghostly visitations seem more like a dream (like Dorothy dreaming that the farmhands are the Scarecrow, the Tin Man, and the Cowardly Lion). The ghosts all have elements of steampunk, particularly the Ghost of Christmas Past - a life-size windup mechanical doll (Christy Nix does a great job with the mechanical movements). The steampunk element is also brought in with the silent chorus of three women and a man in top hat who dance across the stage in a mechanical robot sort of way (choreography by Hannah Weinberg). The set and costumes are really quite cool and pull off the steampunk look in a way that's fun and interesting to look at (set by Sadie Ward and costumes by Stephanie Mueller).

Lyric Arts' A Christmas Carol is a little bizarre and unexpected, especially seen right after the Guthrie's familiar version. It feels a little like that nightmare you might have from a bit of undigested beef or uncooked potato. But the steampunk ghost angle is an interesting one, and this story is so rich there's room for many versions (playing weekends through December 21).

So there you have it - two very different versions of this beloved classic story. One traditional and heart-warming, the other new and steampunk. Take your pick.


*In addition to the above two productions, versions of A Christmas Carol can also be seen at East Ridge High School in Woodbury and Chaska High School. If you know of any other local productions, please comment below.