"Relics" at the Guthrie Theater 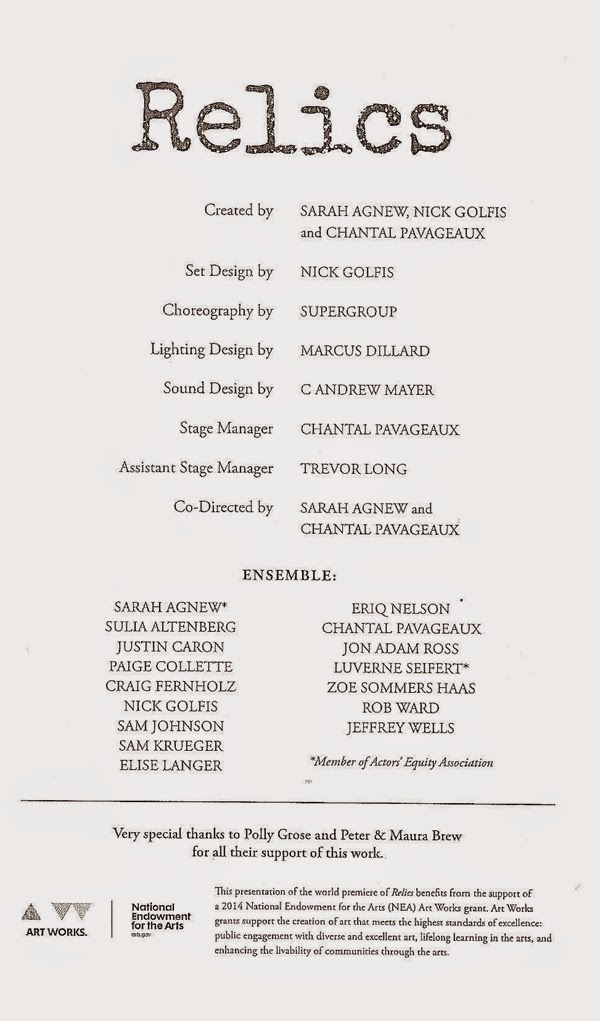 It's that time of year when the Guthrie Theater is full of families attending the annual production of A Christmas Carol, which opens this week. There is noticeably more congestion, with a plethora of little girls in their Christmas dresses. But that's not all that's happening at the Guthrie. Up in the 9th floor studio there is something strange and innovative and decidedly nontraditional going on. After making your way through the Christmas crowd in the 4th floor lobby to the elevators that go up to the 9th floor, you are greeted not just by the usual Guthrie ticket-takers, but also by uniformed personnel who scan your neck, and possibly by men with Johnny Depp Willy Wonka bobs who warn you not to go in. The experience continues in the elevator and after you step off on Floor 9, which has been transformed into a museum of 300 year old artifacts, in the year 2314. i.e., today seen through the eyes of future civilizations. This is not theater as we know it where you sit in your seat and watch something happening onstage, but rather an interactive experience of walking through a museum to witness exhibits, presentations, and reenactments. This is not A Christmas Carol.

This strange and fascinating concept came from the mind of creators Sarah Agnew, Nick Golfis, and Chantal Pavageaux. An ensemble of more than a dozen actors play museum workers, protesters, and other mysterious figures involved in the exhibit. We learn that in that long ago year of 2014, something called "The Great Wipe" occurred. Anarchyologists have recently discovered a family home and everything that's inside, and have created this museum with their theories about what things are used for. Which of course are completely wrong. But it makes you wonder, just what would future people think about our iPhones and Brita water filters and muffin tins? And not only that, but what if all of our assumptions about archaeological digs are wrong? Or maybe the ancient artifacts we ooh and ah over at museums are just everyday items that ancient people would think we're crazy for displaying?

Relics is a really cool idea, I just wanted a little more of it. I wanted to see more exhibits along with the crazy theories. There seemed to be a few too many moments of waiting around for the next exhibit to open or presentation to start, but maybe that was my own fault of not pacing correctly. The reenactment of ancient life is quite hilarious, narrated by the endlessly entertaining Luverne Seifert. But just as it's getting good, it's over. The chief anarchyologist who mysteriously disappeared returns, and is about to tell us what happened, when the show is abruptly over and we're told to leave. I felt a little cheated by that - I wanted to hear what happened, I wanted more Sarah Agnew! Overall I enjoyed the experience, but it left me wanting more.

If you're looking for something a little different this early holiday season, head up to the Guthrie's 9th floor to discover ancient secrets about the things we use today.