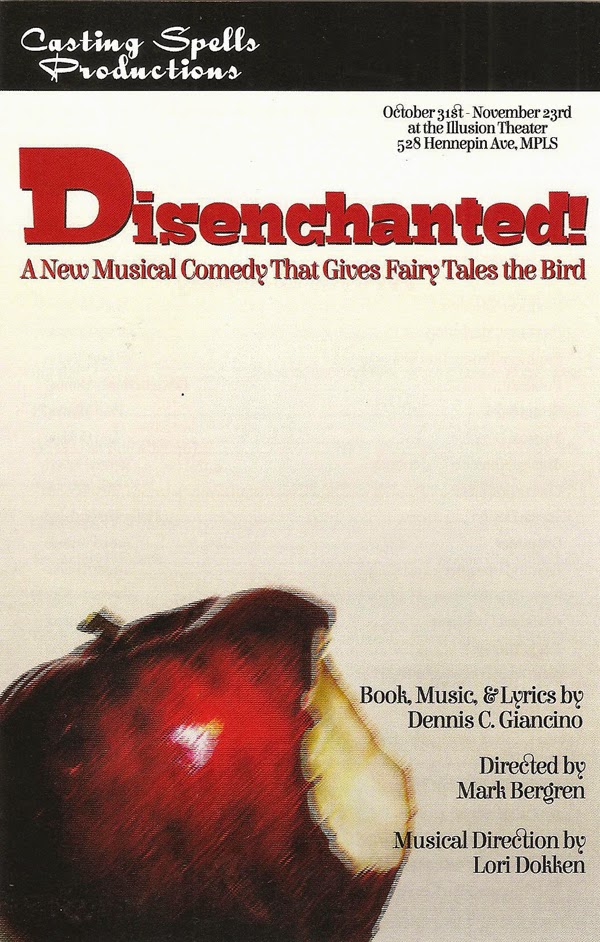 The princesses of Disenchanted will cast their spell on you in a whole different way than their Disney predecessors. While Disney portrays such fairy tale princesses and historical figures as Snow White, the Little Mermaid, and Pocahontas as sweet, mild-mannered, passive ladies waiting for a prince to come along and save them, the salty, sassy princess of Disenchanted are smart, strong, and unwilling to put up with crap from anyone! This new musical comedy by Dennis C. Giancino has had several productions around the country in the last few years and is currently playing Off-Broadway, but more importantly, it's currently in its second production here in the Twin Cities. Casting Spells Productions has brought back three of the princesses from last year's fantastic production at the Ritz Theater, added a few new and equally fabulous princesses, spiffed up the costumes, and included a few tweaks by the creator. It opened at the Illusion Theater on Halloween and continues through November 23; I finally saw it this week, and it's still a super fun show for anyone who loves and/or hates Disney princesses. It also makes for a perfect girls night out; I went with a bunch of friends and spotted several tiaras in the crowd (princess attire encouraged). These are the kind of princesses little (and not so little) girls should emulate!

Our host for the evening is Snow White (Jen Burleigh-Bentz is perfection, reprising the role from last year's show). She's smart, strong, and determined to convey her message about "the Princess Complex" to the audience (she's also not afraid of singing unnecessary runs, to hilarious effect). Her back-up singers are Cinderella (the delightfully daft Bonni Allen, also returning from last year) and a very sleepy Sleeping Beauty (Katherine Tieben-Holt, a welcome newcomer to the cast). They each introduce their story, which of course ends with getting married. But these princesses are here to tell us what happens next - and it's not as pretty and idyllic as Disney would have us believe. We also hear the stories of an insane Belle, a drunken Ariel, a very German Rapunzel (Kim Kivens as all three, a true musical comedy genius as she sings in three distinct styles, each hilarious with spot-on vocals), a possibly lesbian Mulan, a misrepresented Pocahontas, a second-place Jasmine (another excellent triple performance, by Stephanie Bertumen), and last but not least, the frog princess (an underused Joy Dolo, also returning from last year's show). The princesses sing about body image, dieting, and the crazy marketing of the princess image that little girls are rarely able to escape.

All of the princesses have fantastic voices, singing solo or in harmony. The night I attended they were accompanied by the "Understudy" Musical Director, Steven Hobert (filling in for Lori Dokken), who did a great job with the music, and occasionally interacting with the princesses. The structure of the show is casual and tongue-in-cheek, with direct address to the audience, sing-a-longs, and a bit of ad-libbing ("Garth Brooks took all the parking spots!"). Since the show was written, one new Disney princess has risen above all others, and you all know who I'm talking about. While she doesn't appear in the show, the creator has added a "Let It Go!" moment that makes fun of the craze. And of course, you can't talk about princesses without mentioning what they're wearing! Which is a modern spin on each princess' traditional attire (costume design by Barb Portinga).

I'm so glad I had the opportunity to see this show again, and I stand by what I wrote last year: "Featuring catchy and melodic tunes, clever and funny lyrics, and a stellar cast, it's a really fun and fantastic 90 minutes!" Disenchanted continues this weekend and next - don't miss this hilarious and well-sung princess satire! (Buy your tickets here, or get the few remaining discount tickets on Goldstar before they're gone.)