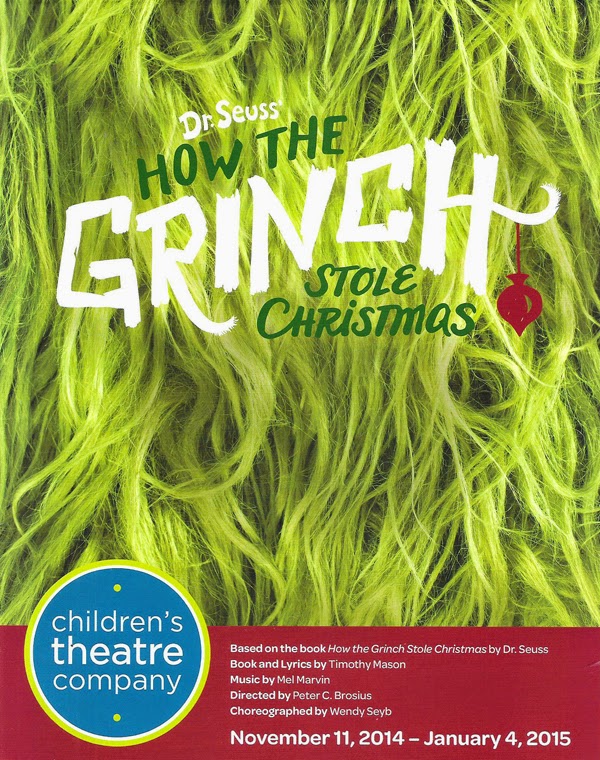 'Tis the season for stories of sad, lonely, grumpy people who experience a change of heart and learn to love their fellow citizens, whether of London or Whoville. After a double bill of Christmas Carols last week, I saw a similar story this week in Dr. Seuss' classic fable How the Grinch Stole Christmas. Like Scrooge, the Grinch hates Christmas, people, and dogs. Also like Scrooge, the Grinch learns how wrong he was, not from ghosts but from one sweet open-hearted little girl. Where A Christmas Carol is the perfect image of a Victorian Christmas, The Grinch takes place in the fantastical rhyming world familiar to anyone who's read Dr. Seuss, or had it read to them, as the case may be with much of Children's Theatre Company's audience. It's a bright and colorful, silly and funny, sweet and heart-warming tale of redemption and love.

In this musical adaptation by Timothy Mason (book and lyrics) and Mel Marvin (music), which premiered at CTC in 1994 before moving on to other stages, including Broadway, the Grinch's story is told by his dog Max, who is now an old dog ready to move on from the cave in the mountain above Whoville. But first, he shares with the audience the remarkable transformation he witnessed. No mention is made of what has happened since that pivotal Christmas long ago, or where the Grinch is now, but it's a clever device that allows much of the original descriptive rhyming language to be used. Old Max remembers how disagreeable Grinch was when he was an eager young pup, and how he forced him to help steal Christmas from the Whos. The plan failed when the Whos woke up on Christmas day to find all their presents, decorations, and food gone, but still sang and made merry, filled with the joy of togetherness and the spirit of the holiday. The Grinch realized that perhaps Christmas is more than presents and roast beast, his heart grew three sizes, and the rest is history.

On the night I attended the show, understudy Max Wojtanowicz stepped into the role of the Grinch, as he will continue to do for the next week or two until Reed Sigmund returns to the show. He more than capably fills the furry green shoes of the Grinch, performing with such gusto and heart in a role he didn't expect to play. He's deliciously and delightfully evil, especially when interacting with the terrified Whos, keeping them on pins and needles as he's alternately insincerely nice and truly horrifying. He fits right in with the large (and small) talented ensemble; I guarantee you will not know you are seeing an understudy. 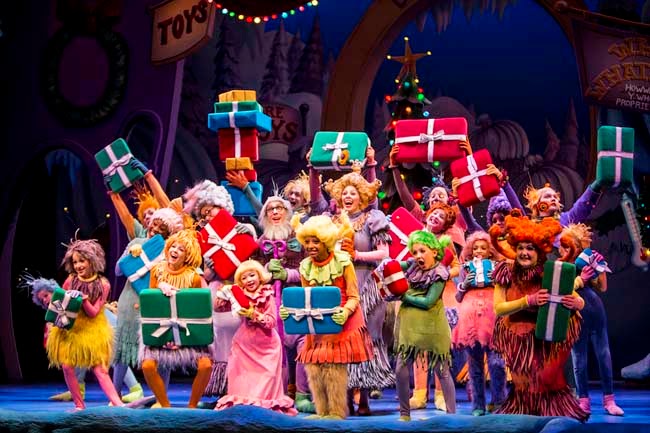 The rest of the cast is pretty great too. Brandon Brooks is adorable and full of puppy-like energy as young Max, the perfect happy yin to the Grinch's grumpy yang. H. Adam Harris mirrors that spirit as old Max, but with the slowness and nostalgia that comes with age. Little Natalie Tran, stealing scenes across town, continues that tradition here with her adorable performance as the cutest Who, Cindy-Lou, with a voice as clear as a bell. There are almost as many kids on stage as there are in the audience, and they're all so animated and enthusiastic, born entertainers every one.

The original songs are fun and well performed by the cast and live pit orchestra, although I was disappointed that "You're a Mean One Mr. Grinch" was not sung but just played by the orchestra after curtain call. The CTC stage looks like something right out of a Dr. Suess book, with cartoonish and playful set pieces (by Tom Butsch), and bright and colorful costumes that are somehow cute despite being the most unflattering shape - a bit wide at the hips and high in the forehead (by David Kay Mickelsen).

How the Grinch Stole Christmas continues through January 4. Bring your little Whos for a fun and heart-warming holiday treat, or go by yourself - I've learned that it's OK for adults to go to the Children's Theatre by themselves. This Grinch is fun for adults, children, Whos, and furry green grumps.