"Buddy - The Buddy Holly Story" at the History Theatre 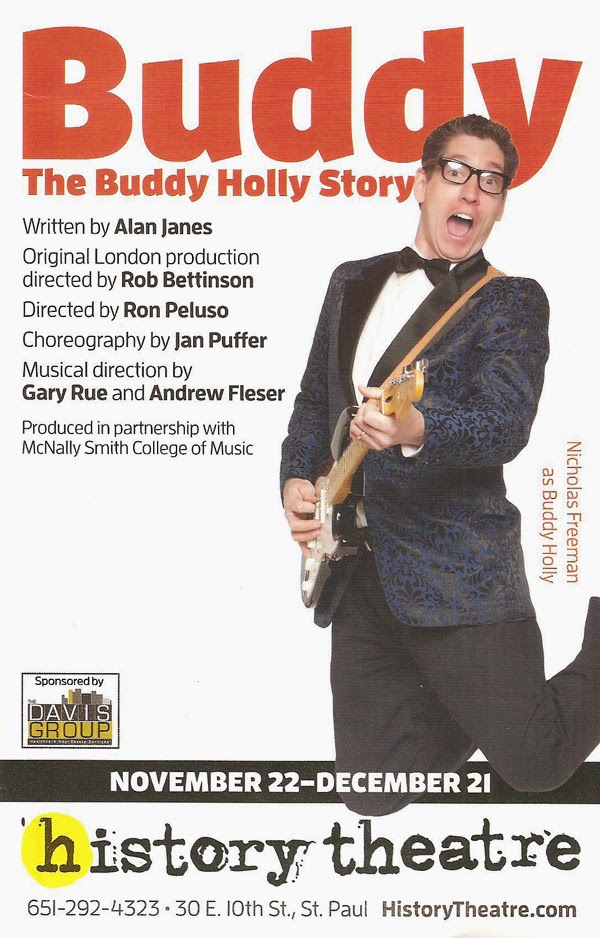 "That'll Be the Day." "Peggy Sue." "Oh, Boy." "Maybe Baby." These iconic songs by '50s rocker Buddy Holly are so much a part of our culture that everyone knows them, even those of us born long after his tragic death in a plane crash in 1959. Buddy - The Buddy Holly Story, a jukebox musical that uses Buddy Holly's music to tell his story, premiered in London in 1989 before crossing the pond to be seen on stages around the country. It's a fitting choice for the History Theatre, which brings varied and sometimes obscure pieces of Minnesota history to life on stage. What does Buddy Holly have to do with Minnesota? His doomed plane was on its way from Clear Lake, Iowa to Moorhead, Minnesota when it crashed, killing Buddy Holly, Ritchie Valens, and the Big Bopper. This production, which premiered at the History Theatre a few years ago, is back this year with much of the original cast of actor/musicians and director Ron Peluso. It's a fun celebration of the all too short life and career of this pioneering rock-and-roller, enjoyed equally by those who remember first-hand his life and death, and those who only know the legend (although the audience skews much more towards the former).

The show follows Buddy's life from his early days in Lubbock, Texas, breaking out of the country-western genre and creating something entirely new, through a failed recording contract, his unprecedented string of hit songs, a whirlwind romance and marriage, and finally, to that fateful last concert in Clear Lake, Iowa. Along the way we hear many of his best hits, along with other songs of the era, including Ritchie Valens and the Big Bopper's biggest hits, "La Bamba" and "Chantilly Lace," respectively. Despite the fun music, there's a slight sense of foreboding as the audience knows how the story ends, even as Buddy and friends move towards it unaware of their fate. But we're not down for long, a brief moment of silence with a single spotlight illuminating a frozen Buddy in his final concert, and we're back to the party, with several songs continuing through and after the curtain call to leave the audience in a good mood.

Nicholas Freeman returns as Buddy, and fully embodies the rocker's spirit, voice, and trademark glasses (even if he does look a little more like Stephen Colbert than Buddy Holly). His experience with and dedication to this show are evident, as he brings this long ago legend to life and makes him seem like a real person. He's supported by a large and talented ensemble, many of whom are current or former students at the McNally Smith College of Music, with which the History Theatre shares a building. The students dancing on stage before the show and in the aisles during some of the numbers bring an authentic youthful energy to the show. Buddy's drummer and bass player are played with great musicianship and personality by Zac Spicer and Ryan Janssen. Lynnea Monique Doublette and Munyaradzi Tirivep embody the spirit of the legendary Apollo Theater in Harlem and rouse the crowd with "Shout!" The excellent ensemble includes Charles Fraser as several music industry people; Andrea San Miguel, charming as Buddy's sudden wife; Four Humors' Brant Miller as the Big Bopper et al.; Bryan Porter, making the most of several small roles; and Mariah Trimm, with a hilariously Midwestern version of The Star-Spangled Banner.

Refreshingly for a musical, the actors are not miked, but use retro style microphones for the big numbers. This also allows for a few lovely unplugged moments, including Buddy singing to his new wife. The stage is set up to look like a '50s stage, and the period costumes include poodle skirts, crinolines, and bow ties galore (sound by C. Andrew Mayer, set by Justin Hooper, and costumes by Lynn Farrington).

If you remember where you were on "the day the music died" and long to reminisce about the days before that loss of innocence, you'll want to catch this show before it closes on December 21 (or later, I hear it's going to be extended). If you only know of it from the song (or, for you other children of the '80s, the 1987 movie La Bamba about Ritchie Valens), this is a chance to learn a little bit more about the legend and imagine what it was like to be a bobby soxer. Either way - a good time was had by all.