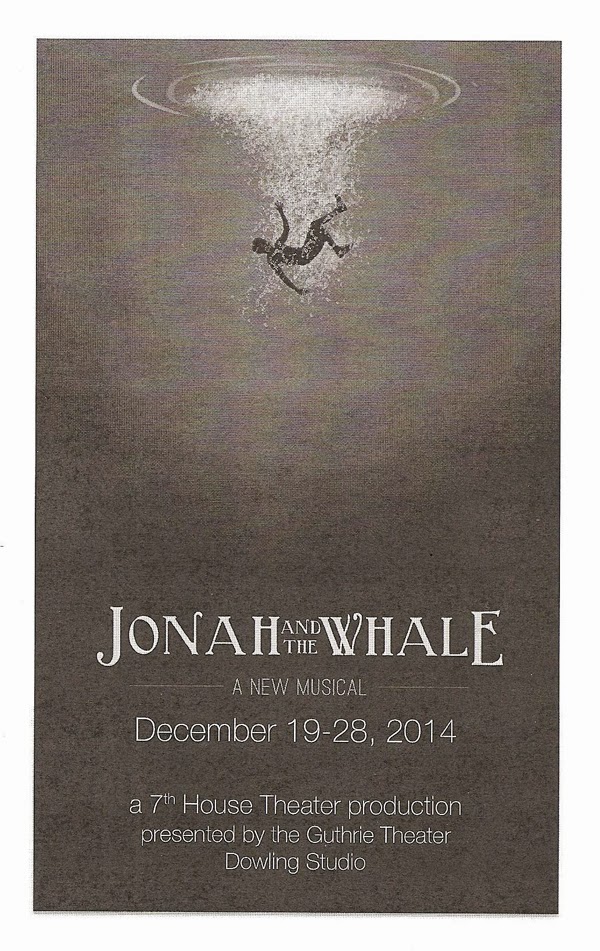 Friends, the future of Minnesota theater, and perhaps American theater, is here. It can currently be seen in the Guthrie Theater's 9th floor Dowling Studio, where a group of smart, talented, ambitious, dedicated, hard-working young music-theater artists have created a beautiful new original musical, based on the biblical story of Jonah. It's everything I want theater to be - fresh, innovative, delightful, heart-breaking, inspiring, genuine, and epic. This is 7th House Theater's fourth production in less than two years, and they continue to explore new ideas and push the boundaries of what theater can be. They've proven themselves with three low-budget but high-quality productions, and now have the resources of the Guthrie behind them to expand even further in this production. The result is beautiful and breath-taking. If 7th House is the future of theater, we're in good hands.

This Jonah and the Whale is a loose and modernized interpretation of the story of Jonah, set somewhere along the Mississippi River sometime in the last century. Jonah is a well-liked happy man, expecting a child with his beloved wife, and fixing anything that's broken in his small close-knit community, including the town clock. An unspeakable tragedy causes Jonah to run away from his life in search of something - peace, healing, answers, a reason to live. He joins the crew of a riverboat and seems to be making progress, until a storm tosses him overboard. The whale is never explicitly named, but Jonah ends up inside something, where he experiences the culmination of his personal crisis, a revelation, and decides to come home. A simple story really, but profound in its telling.

This is a true ensemble piece, with the eight-person ensemble and four-person band (some of whom cross over into the action of the play) taking turns narrating the story and playing various characters in it. At the center of the tale is composer David Darrow, with a heart-breaking and beautifully sung performance as Jonah. Kendall Anne Thompson is his ever-present wife Susan, with a beautiful clear voice that pierces the heart. The rest of the talented ensemble includes Matt Riehle (with a fantastic revival song), Gracie Kay Anderson, Serena Brook, and 7th House company members Cat Brindisi (leading a rousing gospel chorus), Derek Prestly, and Grant Sorenson. Tyler Michaels and Emily King have combined their talents to direct and choreograph this group, and created some really wonderful and innovative movement around the stage.

In just over six months playwright Tyler Mills, along with composer/lyricists* Blake Thomas (a gifted singer/songwriter, check out his music on iTunes) and David Darrow (who gave us a glimpse of his songwriting skills at the Fringe a few years ago) have written what feels like a full and complete musical. The clever, funny, and poignant book has light-hearted homey moments, with plenty of small details added that add color to the characters, as well as intense and personal drama. The score is in the style of "old timey folk/Americana music" (which just happens to be my favorite genre) and includes a gospel chorus, a revival tent song, a bar song, plaintive ballads, and a recurring wordless tune that ties the whole thing together. I'm crossing my fingers that they record a soundtrack; this is music I could listen to endlessly. In addition to the music, there are constant wonderfully inventive sound effects that illuminate the world of Jonah, many created by Mary Fox on various percussive instruments and objects.**

This is definitely the most elaborate set that 7th House has had. The black box theater that is the Dowling Studio is arranged in the frequent proscenium style, with the back of the stage area filled with ladders, barrels, crates, and a moving doorway, creating that early 20th century Americana feel. The simple costumes are also of that Americana dust bowl sort of style, with homespun dresses for the women and worker's coveralls for Jonah (set by Kate Sutton-Johnson, costumes by Mandi Johnson).

Jonah and the Whale is less than 90 minutes long but it feels epic, full and complete and layered, like you've gone on the journey along with Jonah and returned home changed. It's one of those experiences where time stands still and what's happening on stage is the only reality. This is a truly unique and special creation, with so much work and heart put into it by the cast and creative team. It makes my heart glad for the future of theater. I could not be prouder of or happier for the kids at 7th House for their continued success and growth as a company. Go check them out in this show if you can (two shows have been added and limited seats remain), and keep your eye on them in the future.


*Listen to Blake and David talk about writing the song "Wondering Wandering" on an episode of Twin Cities Song Story, hosted by Mark Sweeney.
**Mary and Blake have experience creating wonderful, whimsical, innovative sounds on Take it With You, their monthly radio show, recorded live in Duluth, which you can listen to here.