"A Christmas Story" at the Ordway Center 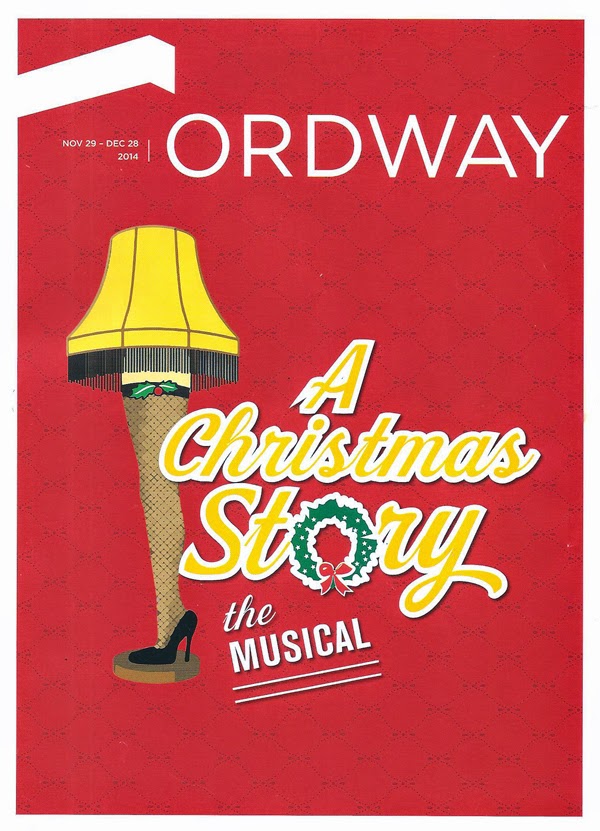 St. Paul's Ordway Center for the Performing Arts is returning to its tradition of an original and (mostly) locally cast production during holidays, rather than the touring productions that often come through.  In fact, the last Ordway Original holiday production was 2011's Cinderella. This year's production of the new musical based on the cult holiday movie A Christmas Story is worth the wait. I am usually skeptical of movies turned into musicals, because often it doesn't work or it just simply isn't necessary. But I saw a preview of A Christmas Story (which officially opens on Friday and runs through December 28) last night and was pleasantly surprised; I enjoyed it much more than I thought I would. In fact I loved pretty much every minute of it. The creators (book by Joseph Robinette, music and lyrics by Benj Pasek and Justin Paul) did a wonderful job of retaining the movie's unique tone of humor, silliness, and nostalgia while creating something new that stands on its own merits, whether you're a fan of the movie or not. And best of all, director James Rocco and his team have created a wonderful production that showcases some of the Twin Cities' finest talent, as well as giving a chance for talented local youngsters to play and shine on stage. The Ordway's A Christmas Story is a wonderful, fun, extravagant, poignant, top-notch production of a new musical based on a beloved classic.

In the musical, the familiar story of the 1983 movie is narrated by the author on whose writing the movie was based, Jean Shepherd (played with much warmth and humor by Gary Briggle). He takes us back to that time in his (or anyone's) youth when the most important thing is getting that gift you desperately want. In this case, young Ralphie wants a BB gun. Specifically, a Red Ryder carbine-action BB gun. His every moment revolves around convincing his parents, his teacher, Santa Claus, anyone, to give him this gun. His quest seems hopeless as he is constantly told, "You'll shoot your eye out!" But he perseveres, as we see several little vignettes of 1940s childhood play out - dealing with bullies, changing a flat tire with your dad, getting your mouth washed out with soap, Christmas shopping and visiting Santa at the mall, writing an essay for school, getting in a fight, daring a kid to lick a flag pole, a family dinner. All told with the seriousness of a child living through these seeming calamities, but with plenty of humor and nostalgia as the narrator (and we adults) know that those really were the good days. In the end, it's really a touching look at family, youth, and fading memories of days long gone.

This mostly local cast of over 40 adults, children, and dogs is a joy to watch. In fact there are so many familiar faces among the ensemble that I barely caught a glimpse of some of them. There is a huge amount of talent on that stage, much more than we're able to see in a mere two hours or so. The Ordway held an open casting call, from which many of the kids were cast, and they're all so stinkin' cute. Is there anything cuter than a bunch of kids in PJ's singing and dancing? Not that I've seen in a while. Our hero, Ralphie, is played by Jake Goodman, who is not a local kid but one who has tremendous talent - stage presence and a fantastic voice - and a bright future. His mother is played by Seattle's Billie Wildrick (last seen at the Ordway as Adelaide in Guys and Dolls), an embodiment of idealized 1940s motherhood, singing the show's most poignant song, "Just Like That." As Ralphie's "old man," local fave Dieter Bierbrauer is quite funny as this hapless dad and sings as gorgeously as always, even when singing about winning a "major award" that everyone else sees as a tacky leg lamp (yes, the leg makes an appearance and even gets its own song and dance number!). And I must mention the always hilarious Erin Schwab, stealing scenes as Ralphie's teacher Miss Shields who sings and dances in his fantasies.

The sets are really fun and fantastical, with an idyllic suburban house that splits in half to move in and out, complete with a bunk bed bedroom above and Santa on the roof. Other set highlights include the family's vintage car, and a huge slide for the mall Santa. It's all very Christmassy and very retro, right down to the gift tags surrounding the stage that look exactly like the ones we had as a kid. The period costumes are great and fun, especially when the kids get to dress up in zoot suits and flapper dresses (sets by J Branson, costumes by Lynda L. Salsbury).

The Ordway's A Christmas Story has everything you want in a Christmas musical - humor, nostalgia, warmth, singing and dancing children, dogs, catchy songs (that are still running through my head), big dance numbers, and plenty of the holiday spirit without being too schmaltzy. Bring your kids or your parents, your favorite aunt or your best friend, or go by yourself and revel in the awkwardness and wonder of youth, and those memories we hold especially dear at this time of the year. (More info here, or check out the discount deals on Goldstar here.)