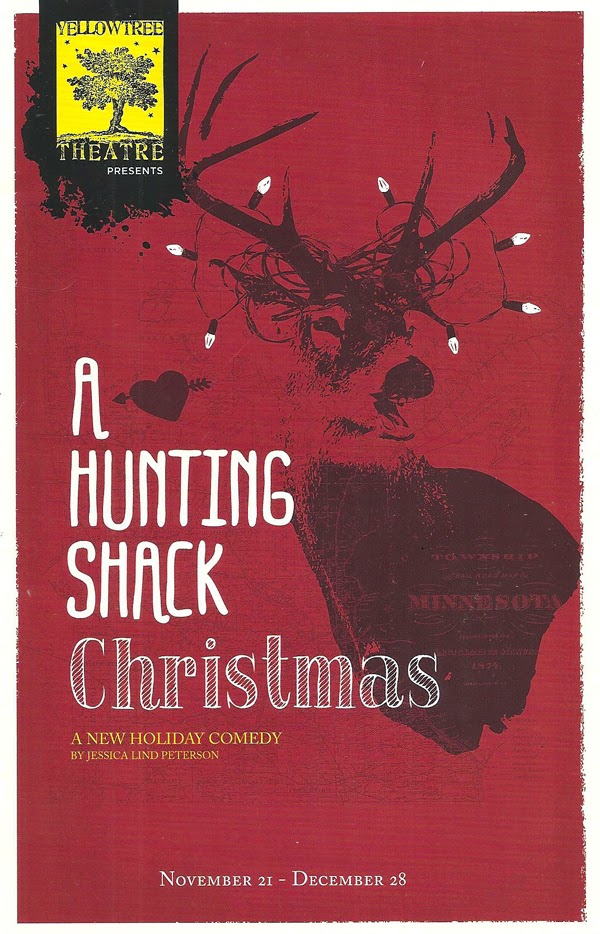 Christmas at Yellow Tree is always a wonderfully wild and ridiculous affair. Now in their seventh season, the little theater that could is continuing in their tradition of hilarious, heart-felt, and very Minnesotan Christmas plays. But this year they're taking a break from their popular Miracle on Christmas Lake series (two installments so far) to venture to a new location - the hunting shack. Yellow Tree co-founders Jessica Lind and Jason Peterson have combined to write and direct, respectively, this funny and charming new play, and have assembled a fantastic cast to bring these quirky and familiar characters to life. I'd tell you to go see it, but it's sold out for the rest of the run, despite the fact that they've added a bunch of shows. So make your plans early for next Christmas, because Yellow Tree Theatre is a wonderful place to be at this time of the year.

Like the Christmas Lake plays, A Hunting Shack Christmas centers on a relatively normal couple facing a possibly life-changing event who encounters some ridiculously Minnesotan characters. Charlie and Jennifer live a perfectly comfortable life in "The Cities," but perhaps one that's lacking a bit of adventure. On the eve of their 10th anniversary vow renewal, Charlie skips town to head to his grandfather's hunting shack to contemplate his life and the changes he's being forced to make. Jennifer is upset that he left, and follows him to the rustic shack. Much to their surprise, Charlie's eccentric uncle Paul and (sort of) aunt June and cousin Ham are squatting in the cabin, and are none too happy to have their lives interrupted by this "citiot." Charlie and Ham bicker like boys, and even engage in some hilarious slow-mo childish fighting. But at the insistence of Aunt June, everyone makes peace with each other, and Charlie and Jen decide to make a change for the better. This oddball family lives happily ever after in their cozy hunting shack (at least until the sequel).

A Hunting Shack Christmas is told in informal narration, with narrator Charlie often speaking directly to the audience and fully acknowledging that we're in the theater, directing the sound and lighting and calling for memories. This structure allows a charming and likeable Sasha Andreev to play with the audience and draw us into the story. Daisy Macklin Skarning (in a role that's the complete opposite of the one she played in Gremlin Theatre's Rocket to the Moon this spring) also brings great charm and enthusiasm to the role of Jennifer, making Charlie and Jen a couple to root for. The character of Ham tells the audience he's the comic relief, and understudy Joseph Pyfferoen is just that, committing fully and hilariously to the role of this oddball young man who lives with his parents, wants to start a jerky company, and is engaged to marry a woman from Norway who rides a reindeer. Greta Grosch and John Haynes both have a strong comedy/improv background, which they bring to the roles of Aunt June and Uncle Paul. Greta especially is a hoot as this stereotypical hotdish-making kombucha-growing Minnesota woman. The entire cast works and plays well together with a great energy, showing no signs of the exhaustion one would think might set in when doing so many added shows.

I've never been to a hunting shack, but Katie Phillips' set design looks pretty authentic to me, in fact it looks quite appealing (minus the alleged smell, anyway). Walking into the theater you go through the entry way of a typical cabin (or Minnesota home), with various coats, jackets, snowsuits, and other warm weather gear. The stage is populated with an ugly couch with mismatched afghans, a wood-burning stove, and kitchen appliances that looks rustic and barely functional. And oh yes, there are the deer heads and mounted fish one would expect at a hunting establishment. Lori Schwartz's costumes are entirely appropriate to this world, from the citiots' puffy vests to the comfy nightwear to the warm but not so stylish outerwear.

Yellow Tree Theatre has done it again - created an original holiday show, written by someone* who obviously has familiarity with and affection for Minnesota, that delights and entertains its loyal audience. Their last play featured a couple of Ivey winners, and their next play stars a brilliant actor currently playing Scrooge at the Guthrie, but Yellow Tree hasn't forgotten who their audience is and what they want to see at the holidays. With A Hunting Shack Christmas, they've delivered a thoroughly enjoyable play worthy of its popularity.


*For more of Jessica's funny and folksy Minnesota writing, check out her blog
Unfamous Minnesota Girl.