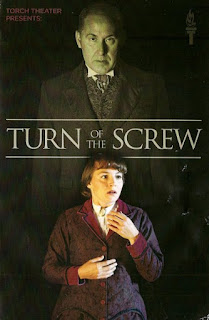 I'm sitting outside on a lovely fall day after just having seen Jeffrey Hatcher's stage adaptation of the 19th century novella The Turn of the Screw, and I'm still creeped out despite the sunlight and fresh air. Torch Theater Company's production is a deliciously dark and spooky ghost story that will stay with you after it ends. When the lights went down on the final scene, you could hear the audience squirming and trying to shake off the spell before breaking out into applause. I can't think of a better way to celebrate this Halloween season than seeing this excellent production of a classic ghost story!

In the original novella, a man tells a story told to him by his governess when he was a boy. The events in question unfold over seven days during the governess' first assignment. Playwright Jeffrey Hatcher, whose work has been seen on many local stages this year, has adapted the story into a two-person play. Lindsay Marcy plays the governess, and Craig Johnson plays all the other roles, including the master of the house, the housekeeper, the little boy, and various spooky sound effects. I don't want to say too much about the plot, because it unfolds in such perfect suspense and anticipation, that I don't want to ruin it for anyone. Suffice it to say it involves a governess with the best of hopes and intentions about her new position (which means things are sure to go wrong), a little girl who does not speak, a little boy who was kicked out of school because of "unspeakable" acts, a cowering yet dependable housekeeper, a Gothic tower, a stormy lake, ghostly apparitions in a stately home in the English countryside, rumors of lust and suicide, and an ambiguous ending. What more does a spooky story need?

Everything about this production is top notch. The two actors give brilliant performances. Lindsay transforms before our eyes from an optimistic young woman with romantic ideas about her first appointment (the estate is perfectly picturesque, the adorable children will be her fast friends, the master will fall in love with her) into a desperate and haunted woman who doesn't know quite what is going on but is determined to prevail. Even her physical appearance goes from neat and proper (in a gorgeous period dress) to frantic and bedraggled. As I mentioned, Craig plays several different roles, and each is a specific and spectacular creation. The master is powerful and confident, the housekeeper is fluttery and frightened (I especially love the way he brings his trembling hands up to his mouth), the little boy is charming and naughty. And when he's not playing a character, he silently walks across the stage and adds sound effects in the creepiest performance of all!

The Theatre Garage stage is bare and open, with a spiral staircase hinting at the majesty of the manor, a barren tree representing the garden, and a miniature house hanging from the ceiling (set by frequent Jungle Theater contributor Joel Sass). The lighting (by Paul Epton) and sound (by Katharine Horowitz) do much to create the sense of foreboding that's so much a part of the piece. Whether it's music or a sound like a heartbeat, or anything in between, the sound keeps you on the edge of your seat. Similarly, the lights go up or down depending on what's going on in the moment, and the darker it gets, the bigger the delightful chill you feel. Directed by David Mann, the pace is pitch-perfect and all of the elements come together very satisfactorally.

There are only three performances left of this show. Get your tickets now if you want to experience a classic spooky thrill this Halloween. As a bonus, you can stay for more late night ghost stories after the Friday and Saturday night performances (see Torch Theater's website for more information and to reserve your tickets, and check out the half-price ticket deal on Goldstar.com).