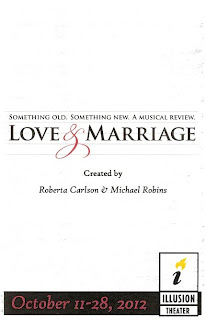 Love and marriage are so much a part of our culture; "you can't have one without the other," says the song. But the reality is that marriage is an exclusive club in our country, one that not everyone can join, despite how valued it is in our society. The issue of marriage equality is in the forefront right now, and Illusion Theater's new musical review, appropriately titled Love & Marriage, brings the issue to light with warmth, humor, music, and stories of over a dozen diverse real life couples. It's a fun and heartwarming celebration of love.

Eight fabulous local actor/singers bring this music to life, accompanied by Roberta Carlson on piano, who created the show with Illusion's Artistic Director Michael Robins. The song list includes classic American love songs, musical theater standards, and current pop songs (or as I call them, Glee songs). Also included are a few original songs by Roberta that fit right into the lexicon of American love songs. Interspersed with the musical numbers are clips of interviews with real-life couples of all sorts - straight, gay, and lesbian. They tell their "meet cute" stories, and continue on as the show progresses to their stories of committing to each other, going through hard times, and making their relationship last. Featured couples include local celebrities such as Minneapolis mayor R.T. Rybak and his wife Megan, talented actor and singer Bradley Greenwald and his partner John, and recent Ivey Award winner Isabel Nelson and her husband (and Transatlantic Love Affair co-founder) Diogo (and now I finally understand where they got the name of their theater company). Their stories are touching, funny, and inspiring.

Highlights from the talented cast include:

My favorite group numbers include a Sondheim song I'd never heard, "Loving You," a typically amazing Sondheim song brought to life in the beautiful harmonies of Adara, Randy, Cat, and Reid, and another Sondheim song that is quite literally about marriage, "The Little Things You Do Together" (from Company, which I will see tonight!). The cast sings and performs beautifully as a group, in pairs, and individually.

Love & Marriage is a fun and entertaining evening of music that personalizes the topic of marriage equality by sharing the true stories of real people in our community. On November 6, my beloved home state of Minnesota will vote on a constitutional amendment that limits the definition of marriage to one man and one woman. I don't know how anyone can see this show and witness the love of all of these couples, and still vote yes on this amedment. Through music and real stories, we see the equality and validity of all kinds of love. I plan to VOTE NO on the marriage amendment (and the voter ID amendment, see my thoughts on Appomattox for more about that). Will you join me?