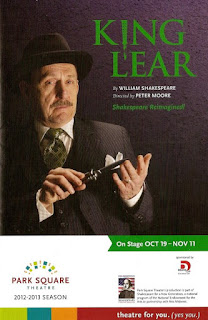 Park Square Theatre's new production of Shakespeare's King Lear* sets the classic story of an aging king going mad in Prohibition era America, complete with guns, gowns, and lots of drinking. The strong cast brings the characters to life, most of whom end up dead by the end of the play in typical Shakespearean style. Along the way, stories of betrayal, loyalty, disguised identities, power, manipulations, and eye gouging (gross) are told in intensely dramatic fashion. I have to admit, Shakespeare is not my favorite (I much prefer Park Square's last show, the new two-person play Red, more about ideas than action), but this play is worth seeing for the masterful performances of the cast in these meaty roles, directed by Peter Moore (a much different tone than his other show I saw this week, the sketch comedy 2 Sugars, Room for Cream).

I've seen King Lear once before, a Royal Shakespeare Company production at the Guthrie, starring Sir Ian McKellan. But since that was pre-blog and my memory is not as good as it used to be, I really didn't remember much about it (other than I saw way more of Gandalf than I ever wanted to!). So it was with a fresh eye that I saw this production, and was able to appreciate Raye Birk's performance without any baggage of past performances of this classic theater role. As King Lear, he convincingly transforms from powerful and genial, to irrationally angry, to pitifully lost, to compassionately loving, often in one scene. With such a range of emotions, it's no wonder this is such a coveted role, and Raye plays every one of those emotions to the hilt.

Another performance I particularly enjoyed is Jim Lichtsheidl as the bastard son of a lord who manipulates his father into believing that his brother is plotting against him, while playing with the affections of two of Lear's (married) daughters. Jim is so deliciously evil that you almost want to root for him in his schemes (and what is it about a mustache that instantly makes a man look more devilish?). Dan Hopman also impresses as the wronged brother, who hides out as a bum, and is thereby able to protect his father (the regal Stephen D'Ambrose) after the aforementioned eye gouging.

Other standouts in the cast include Jennifer Blagen and Stacia Rice as Lear's greedy daughters who flatter him until they get their inheritance, and then push him aside; Adelin Phelps (who played a version of Cinderella in my favorite Fringe show this summer) as the daughter who refuses to play his game and is disowned because of it, while still remaining loyal to the father that she loves; and Ansa Akyea as another loyal supporter of the king despite being banished and forced to assume a new identy (wouldn't it be awesome if banishment were still an available punishment today, and one could change one's hairstyle and accent and be completely unrecognizable to the people who know them best?).

Last but not least, Gary Briggle plays the fool as a former Vaudeville performer, who cheers his lord with songs and brings some much-needed levity to the show. One of my favorite parts of the play happens before the action of play actually begins. When I got to my seat about ten minutes prior to showtime, the cast was already on stage mingling at the King's party, as the fool (Gary) entertained them by singing songs ranging from opera to pop songs of the day ("You're the Top"). It's fun to observe the informal meetings and partings, not to mention the gorgeous dresses with full-length trains worn by Lear's daughters (costumes by Amy B. Kaufman).

Park Square Theatre's re-imagining of King Lear is playing now through November 11. It's worth checking out if you're a fan of Shakespeare or of great performances.

*I received one complementary ticket to the opening night of King Lear.