"Cabaret" by Theater Latte Da at the Pantages Theatre 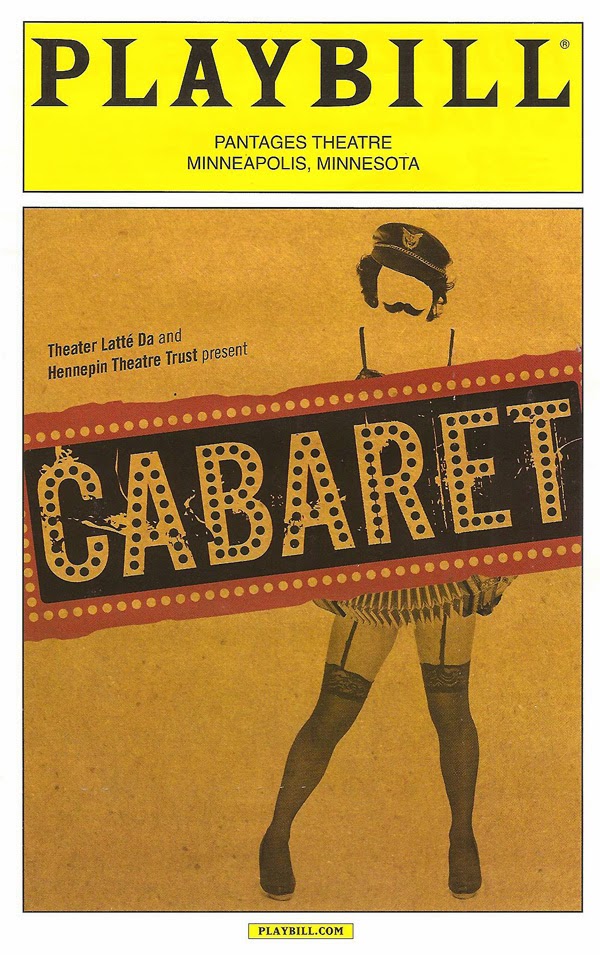 What good is sitting alone in your room?
Come hear the music play.
Life is a cabaret old chum,
Come to the cabaret.

Truer words were never spoken, or sung. If you are reading this sitting alone in your room, immediately book your ticket to see the newest Theater Latte Da and Hennepin Theatre Trust collaboration - Cabaret. The brilliance of this classic Kander and Ebb musical combined with the singular talent of Theater Latte Da in breathing new life into the genre of musical theater, plus the extra resources that partnering with Hennepin Theatre Trust can provide, make for an outstanding theatrical experience. Cabaret is seductive - it lures you in with it's fun, sexy, bright entertainment. But after you get sucked in, the dark cloud hanging over 1930s Berlin begins to descend, and you see that the show is really about much more than scantily clad dancers and entertaining songs. There's nothing more horrific than the Nazi rise to power in 1930s Germany, and Cabaret brings that horror to life as it begins to affect these characters that we've come to love. Life is not just a cabaret, it's a broken, damaged, heart-breaking, but incredibly beautiful thing.

The 1966 musical Cabaret is based on Christopher Isherwood's semi-autobiographical novel about Berlin in the early 1930s. Much of the action is set in a cabaret called the Kit Kat Klub, a mecca of art, creativity, music, love, sexuality, expression, joy, and life, at a time just before the beautiful city of Berlin entered the darkest period in its history, which resulted in the death of all of these things. This world is seen through the eyes of an American writer named Cliff, who moves to Berlin to work on his novel. He soon meets Sally Bowles, the star of the Kit Kat Klub, and begins a complicated relationship with her. He also befriends his landlord Fräulein Schneider and the other residents of the boarding house. They're happy for a while living in the decadence of the time, until reality comes crashing down around them. As Cliff says, "It was the end of the world, and I was dancing with Sally Bowles and we were both asleep."

Like all Peter Rothstein shows, this show is impeccably cast. Either Peter has a great eye for talent, or he's the kind of director that can bring out the best in his cast (I suspect it's some of both). Each actor is pitch perfect in his or her role, from Adam Qualls as the mysterious but seemingly friendly Ernst to Aeysha Kinnunen as the "working girl" boarder. Sean Dooley is sweet and charming at the heart of the show as Cliff, and Kira Lace Hawkins is fierce and vulnerable as the loveable mess that is Sally Bowles, closing the show with a crazy, wide-eyed, running mascara, drug-addled performance of the title song. As Fraulien Schneider, Guthrie regular Sally Wingert adds musical theater to her list of talents and proves there really is nothing she can't do. Maybe she's not a trained singer, "so who cares, so what?" Musical theater is about character and story, and no one can give full expression to a character better than the StarTribune's 2013 artist of the year. James Detmar is her equal partner as Herr Schultz in the sweet and tender later-in-life love story. Last but not least, the show doesn't work without the gorgeous and talented Kit Kat girls and boys (and in between), each one of whom is fantastic and endlessly watchable.

I haven't yet mentioned the most pivotal character in the piece, the emcee, because he deserves a paragraph all his own. Tyler Michaels rocks my world. There's no limit to this young man's talent. Just two years ago he was my favorite newcomer, and he's exceeded my expectations. No matter who he is playing (from Snoopy to one of Joseph's brothers) he feels the character in every cell of his body. This is a perfect role for him to express his many talents - singing, acting, moving, dancing, crawling all over the scenery, even trapeze and aerial work. As the emcee of the Kit Kat Klub he presides over every scene, observing from the sidelines where you can read his thoughts and reactions on his face (made up in purple glitter) and in the way he holds his body. There are so many wonderful little touches that make this such a full and rich performance, but I don't want to spoil them. Instead I'll just say - keep your eyes on Tyler, in this and future shows (including The Little Mermaid at the Chanhassen and My Fair Lady at the Guthrie). I just hope we can keep him in Minnesota for a little while longer before he goes off to conquer the world.

The set (designed by Kate Sutton-Johnson) is like a giant jungle gym for the actors to play on. Tarnished bronze pipes forms railings, stairs, poles, and ladders in the two story set. Dingy and broken stained glass windows in muted browns and blues serve as backdrops and set pieces, with scene transitions happening smoothly and seamlessly as the Kit Kat boys and girls in various stages of undress, often with a cigarette hanging from the corner of their mouth, move furniture on and off stage. The costumes are unbelievably skimpy, but what there is of them is rich, bold, seedy, and delicious, and the actors move in them with complete confidence. These movements are choreographed brilliantly by Michael Matthew Ferrel; each number is a feast for the eyes with so much going on you can't possibly take it all in in one sitting. And of course, the six-piece orchestra lead by Fräulein Denise Prosek is, indeed, beautiful.

Not since 2012's Ivey Award-winning Spring Awakening has Theater Latte Da created such perfection in musical theater. There is not one single thing that I would change about the show, other than extending it so that I could spend the rest of my life sitting in the Pantages Theatre experiencing the beautiful and tragic world of Cabaret. I don't often say "go see this show," but I'm saying it now. Go see this show, playing now through February 9. It's musical theater at its best, and a fantastic display of our brilliant local talent.