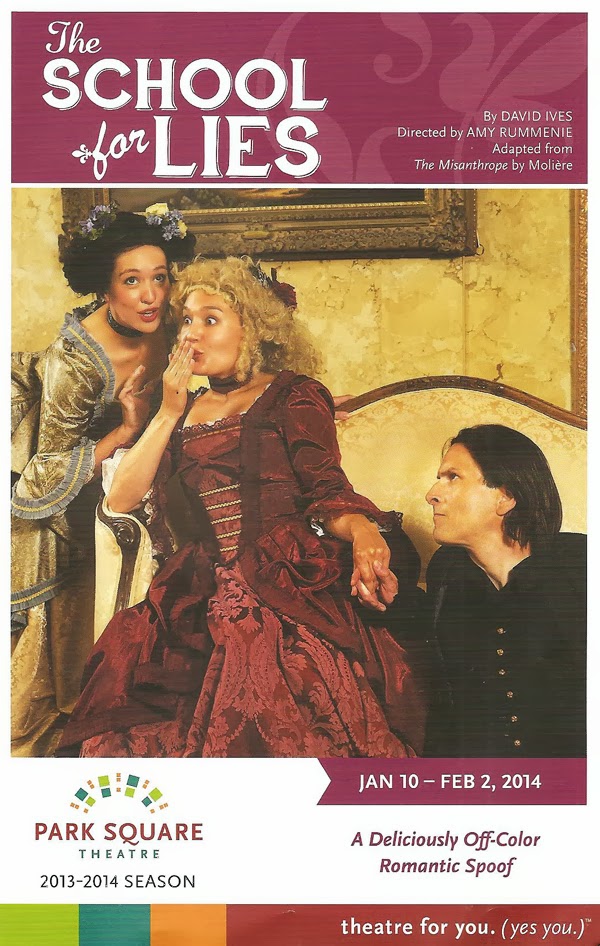 The School for Lies is a new adaptation of the classic French comedy The Misanthrope by Moliere; the title comes from the line "society is nothing but a school for lies," which summarizes the play quite well. This version, written by Venus in Fur playwright David Ives, maintains the setting (17th century France), characters (the French aristocracy), and plot (man disapproving of said aristocracy nevertheless finds himself falling in love with one of them), but recasts the story in modern language and delightful rhyme. Like all rhythmic language (see also Shakespeare), it requires some concentration on the audience's part (no sitting back passively here). But once you get into the flow of it, it's really quite clever, and this cast (directed by Walking Shadow Theatre's Amy Rummenie) does a marvelous job of bringing life to the language and the story.

The play centers around the widow Celimene and her court, including her cousin Eliante and three suitors. Into this mix Philinte brings his friend Frank, who has no patience for the pretenses of society and proceeds to offend everyone. Except for the women, who fall in love with him (sometimes with the help of lies). Celimene is facing a trial for slander, and asks Frank to defend her against her rival Arsinoé. Much comedy, mix-ups, and romance ensues, along with many spilled canapés.

The fantastic cast is led by Kate Guenzel, truly delightful as Celimene, and John Middleton, just terrific as Frank, the one grounded and real character amidst the silly fools. As Celimene's suitors, David Beukema, Brandon Bruce, and John Catron are each appropriately and uniquely buffoonish (one continually picking his nose, one a horrible poet, and one happily stupid). Also great are Anna Hickey as the sweet and charming Eliante, Jason Rojas (whose beautiful hair puts the wigs to shame) as the sincere Philante, and Andrea Wollenberg as Celimene's ugly stepsister-like rival. Last but not least is the scene stealer Skyler Nowinski as two beleaguered servants, relatively minor characters but the ones that get the biggest laughs.

Walking into the theater, the stage reminded me of something from Behind the Candelabra - glitz and gold everywhere. The costumes are outrageous in the best possible way, not to mention the wigs! Completing the looks are an epidemic of moles and warts. (Set by Robin McIntyre, costumes by Susan E. Mickey, wigs by David Hermann.)

The School for Lies continues at Park Square Theatre in cold and lovely downtown St. Paul through February 2 (discount tickets available on Goldstar.com). It's a crazy fun romp through 17th century France, in a fresh and modern way. Check out the video below for a taste of the madness:

The School for Lies from Park Square Theatre on Vimeo.