I was tired and crabby last night when I made my way out into below-zero temps to attend In the Heart of the Beast's Cartooon. I had gotten in late the night before from a busy three-day business trip, which was preceded by six straight days at the theater. Due to a mix-up that afternoon I thought that the performance had been cancelled, and I was secretly relieved because that meant I could curl up on the couch and watch the new Sherlock, and then go to bed early. So I was a little disappointed when I found out that my rare night off was not to be. But I went anyway, because that's what I do. And I soon learned that it's impossible to be crabby while watching the delightfully creative and absurd Cartooon. My mood was completely turned around moments after stepping into the cold and musty-smelling theater, and with a 7 o'clock showtime and a running time of just over an hour, I was still home in time to go to bed early. As for Sherlock, he'll still be there waiting for me.

I had never attended a performance by In the Heart of the Beast Puppet and Mask Theatre, but of course I've heard many wonderful things about them. I therefore had high expectations, and I was not disappointed. Cartooon is like a live-action cartoon acted out with two-dimensional puppets and countless crazy and creative props (everything AND the kitchen sink!), with the story told by a narrator (Maren Ward) and music provided by a ten-piece orchestra (led by music director and sound effects man Matt Larson) and a twelve-person choir (directed by Elizabeth Windnagel). The cartoon follows "Tummy da Talking Turtle" and his crocodile nemesis (think the Road Runner and Wile E. Coyote), and a woman known as "bouncy bouncy," represented only by a pair of legs in red shoes. 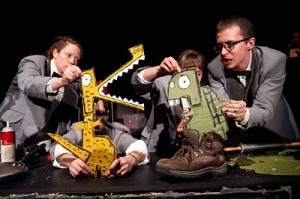 The plot of the cartoon mostly consists of the two frenemies one-upping each other with physical insults, chasing each other around the world, blowing up dynamite, and other crazy machinations. It's reenacted three times with successively larger puppets. First hand-held (multiple versions), then life-size, then over-sized. Typical cartoon things happen, like a piano or anvil falling on someone, or a character running through a brick wall and leaving a hole the shape of their body, or eyes bulging and tongue rolling out (sometimes all the way to the taco place next door) at the sight of a beautiful woman. The way all of these things are represented is incredibly creative and inventive. Four puppeteers - Steve Ackerman (who also created and directs the show), Lauren Anderson, Jon Mac Cole, and Carly Wicks - manipulate all of these shenanigans at an incredibly fast pace, utilizing all areas of the theater in the chase around the world. The gags keep getting bigger and bigger (literally and figuratively), and the action happens faster and more furiously, until the whole thing devolves into a wonderfully chaotic mess by the end of the show. It probably takes them four times as long to set up the incredibly intricate workings of the show than it does to tear it all down again. But I'm certain the latter is much more fun.

I'm not sure I've ever seen anything like Cartooon before. Mind-boggling creativity, silly fun, with the audience in stitches the whole time. In short, it's utterly charming and completely absurd. So even if you're tired and crabby and it's freezing cold out (or maybe especially if that's the case), Cartooon is just the thing to brighten your day and warm you up. Just four performances remain this weekend, so get there while you can.