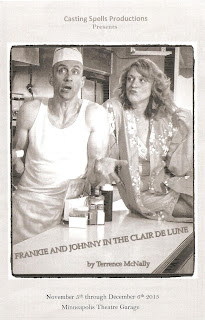 A short order cook who is an ex-con and reads Shakespeare. A waitress who's given up her dream of being an actress and is afraid to hope for anything more in life. It may seem inevitable that these two NYC diner coworkers get together, but how it happens is a funny, sexy, awkward, bittersweet little dance in the two-person play Frankie and Johnny in the Clair De Lune. From the company that brought us the delightfully disgruntled princesses of Disenchanted comes a very different play, but maybe not so different as it at first seems. In just their second outing, Casting Spells Productions once again delivers a funny, risky, well-cast, and entertaining show. I look forward to seeing what spells they cast in the future.

This odd little dance between Frankie (Shanan Custer) and Johnny (Charles Hubbell) plays out in real time before us, with an onstage clock ticking away the wee hours of the morning. The post-coital (for lack of a better term, apologies for sounding like Sheldon Cooper) conversation unfolds in the first act as Frankie tries to get Johnny to leave her late '80s Hell's Kitchen studio apartment. He comes on way too strong, talking about connection and marriage and kids (!), while she is guarded after having her heart (and other body parts) broken in a past relationship. The power balance continually shifts as they discover new things about each other, for better or worse.

I can't say enough about Shanan and Charles in this show. They both give such natural, raw, vulnerable, and naked (physically and emotionally) performances, and have a wonderful chemistry that wavers between complete trust and connection, and prickly disagreement and disconnection. Terrence McNally has written a funny, poignant, and realistic script, and both actors, under the direction of James Detmar, bring out every nuance in it. It truly is a joy to watch these two actors at work that doesn't feel like work at all.

Did I mention it's the late '80s? If you missed the note in the program, the set leaves no doubt of where we are in time. Jane Ryan has designed an intricately detailed replica of a small NYC apartment in the '80s, built forward in the large Garage space so that you almost feel like you're in the apartment with them. But it's not just late '80s; Frankie has lived here for eight years and it looks like she hasn't redecorated since she moved in. The avocado green appliances, Formica table top, Corningware casserole dish, Nabisco Premium cracker tin, and even the functional toaster all felt incredibly familiar to this child of the '70s. And this being a play about a cook and a waitress, the kitchen gets a workout, with the aforementioned toaster being put to use making a cold meatloaf sandwich - which the actors actually eat! I love that, there's nothing worse than fake stage eating. Johnny shows off his chopping and cooking skills in the second act with a Western that unfortunately doesn't get eaten, but we can smell it cooking! The detailed set, the functional kitchen, the visibly ticking clock, and the cooking and eating of food all add to the feeling that this is a real conversation, a real connection, really happening before us.

There's a lot of excellent theater happening on small stages around the Twin Cities at affordable prices, and Frankie and Johnny in the Clair De Lune is one of them. Head to the Minneapolis Theater Garage (a lovely small theater space that is under threat of demolition) between now and December 6 to catch this funny and poignant play about two damaged people who just might have found something good (discount tickets available on Goldstar).