"Doubt" by New Epic Theater at the Lab Theater 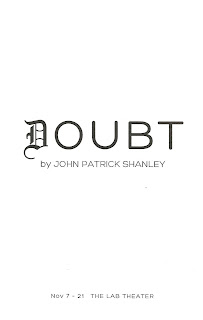 Friends, I know that there are a lot of theater companies in the Twin Cities, so many that it's hard to keep track of them all and impossible to see them all. But you would be wise to take note of New Epic Theater. With just their second production outside of the Fringe Festival and their first full season of programming, they've already established themselves as one to watch with smart, intense, risk-taking, aesthetically beautiful productions. Their new production of John Patrick Stanley's 2005 Tony-winner Doubt re-imagines the new classic with inventive staging that brings the themes of doubt vs. certainty, racial and gender inequality, and the power hierarchy of the Catholic Church into almost painfully sharp focus.

On the surface, Doubt is about sexual abuse in the Catholic Church and its horrifying habit of covering it up. But the beautifully and smartly written play digs so much deeper than that. Sister Aloysius is the principal of a Catholic school in 1964, shortly after Vatican II changed and modernized many traditions of the church. The stern nun believes in tradition and doesn't approve of new ideas like the ballpoint pen and "Frosty the Snowman." In contrast, Father Flynn is a young and modern priest, who coaches the basketball team and wants to include secular songs in the Christmas pageant. It's almost as if she goes out of her way to look for evidence of Father Flynn's wrong-doing. The young and "innocent" teacher Sister James obliges, when she shares that a student (who, perhaps not coincidentally, is the only black student in the school) came back from a private meeting with the priest smelling of alcohol and visibly upset. What follows is a series of intense scenes in which Sister Aloysius tries to get Father Flynn to confess and be expelled from the Church. But since she's merely a nun, she is limited in her power within the patriarchy of the Church and is forced to use unconventional methods to accomplish her goal of removing Father Flynn. She eventually does so, but at what cost? Sister Aloysius, so firm in her beliefs, is now riddled with doubt. Doubt in Father Flynn's guilt? Or doubt in everything she's believed in her whole life and career?

As with New Epic's other shows, the actors rarely leave the stage, even when not in the scene, silently sitting on the side, moving around, or observing, allowing their characters to continue to live and breathe. The strong four-person cast beautifully embodies these clearly drawn characters, from Claudia Wilkins' strict and severe Sister Aloysius, to Adam Quall's charming yet slightly creepy Father Flynn, to Aeysha Kinnunen's sweet and fluttery Sister James, to Austene Van as the boy's mother, who has an unexpected reaction to Sister Aloysius' suspicions. And while there are only four actors in the play, there's a fifth character who is really the focus of the story, although it's really more about everyone else's reaction to him. In this production, the boy is hauntingly represented by a puppet, and the way that each character silently interacts with the him adds depth to the story.

Director Joseph Stodola is also credited as scenographer, and the picture he paints is, as always, beautiful and cohesive. In the cavernous open space of the Lab Theater, the stage is set up almost like a runway, with an overhead platform that is both a ceiling and a setting for scenes, as actors climb up a ladder or makeshift steps. Above it all a large cross hangs from the ceiling. Prior to the play the boy puppet is sitting on top of the platform, almost like a crucifix. Combined with Mary Shabatura's lighting design, the set allows for some starkly beautiful images in contrasting black and white, light and shadow. I was particularly struck by Sister James and Father Flynn's shadows on the brick wall during their confrontation on top of the platform. The overall look of the play is gorgeous (although I wish Mrs. Muller's wardrobe were a little less modern and stylish).

Go see this excellent new production of what has become a modern classic of American theater. Aesthetically beautiful, thought-provoking, disturbing, well-acted and directed, it deserves a larger audience than the one I was part of last night. Doubt continues at the Lab Theater through November 21 and tickets are just $20 (even better - $10 tickets on Goldstar!).