"Beautiful - The Carole King Musical" at the Orpheum Theatre 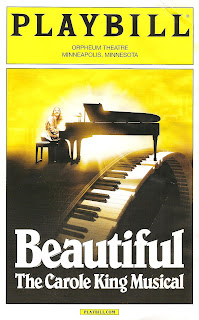 "You've got to get up every morning with a smile on your face, and show the world all the love in your heart." The opening lyrics of prolific songwriter Carole King's "Beautiful" paint a pretty picture, but as we learn in the biographical jukebox musical of the same name, her real life wasn't always pretty. Pregnant and married at 17, divorced by 26, she still managed to become one of the most successful songwriters of the 20th Century with such well-known hits as "Will You Love Me Tomorrow," "Up on the Roof," "You've Got a Friend," and "Natural Woman." Beautiful - The Carole King Musical tells Carole's life story as she finds her own voice, culminating in her Grammy-winning 1971 solo album Tapestry. Although it feels at times like a baby boomer tribute concert, Beautiful truly is just that - beautiful - as it celebrates this remarkable woman's talents and life story.

We meet Carole sometime in the late '50s when the teenager begins writing songs at the famous "song factory" at 1650 Broadway (near the Brill Building). She marries her boyfriend and songwriting partner Gerry Goffin when she finds herself pregnant, and they score their first big hit with "Will You Love Me Tomorrow" that allows them to quit their day jobs, move to the suburbs, and write songs full time (it's a musical spanning over a decade, so things happen quickly). But Gerry has a wandering eye and a restless spirit, and makes Carole feel like she's not enough. With the support of friends and songwriting rivals Cynthia Weil and Barry Mann, she moves to L.A. with her two daughters and decides to record her own songs, resulting in Tapestry and a concert at Carnegie Hall (and the obligatory apology and closure with her ex). And of course, plenty of familiar songs are peppered throughout the story, over a dozen of Carole's, as well as some by Weil and Mann, each one a crowd-pleaser.

Beautiful is similar to that other popular biographical jukebox musical Jersey Boys in the construction of the book (by Douglas McGrath). A musician's life story is told using their songs organically as they fit into the trajectory of the story, with quick switches to the concert version of the song (sung here by The Drifters, The Shirelles, and The Righteous Brothers). In that way it's less of a musical than a play with music (see the Cherry and Spoon Music-Theater Spectrum*).

Abby Mueller plays Carole King on this first national tour, stepping into the role created on Broadway by her little sister Jessie, for which she won the Tony. I've never had the pleasure of seeing Jessie's performance, but these two obviously share the same genes because Abby's performance is also Tony-worthy. She's completely charming and disarming as the reluctant rock star, with a golden voice that's so smooth and effortless that the powerful moments come as a glorious shock. It's truly a pleasure to listen to her sing (and play the piano!) on such classics as "Natural Woman" and "Beautiful," infusing the words with raw emotion. She's surrounded by a strong supporting cast, including the charming Liam Tobin as Gerry, who sings like a dream and almost makes you forget what a jerk the character is. As Barry and Cynthia, Ben Fankhauser and Becky Gulsvig are a great sparring and comedic romantic couple and provide some great music and story moments.

The super cool and versatile set transforms from Carole's Brooklyn living room, to the office building, to the stage of a concert. Set pieces swirl on and off stage, with the single piano moving around from one area of the set to another. The period costumes range from flashy to everyday as appropriate for the character (scenic design by Derek McLane, costume design by Alejo Vietti),

The national tour of Beautiful is settling into Minneapolis' Orpheum Theatre for a luxurious two-week stay, including six performances Thanksgiving weekend. That's certainly something to be thankful for (more info and tickets here).

*The Cherry and Spoon Music-Theater Spectrum (TM pending): in a musical, characters sing in character, expressing their emotions and moving the plot forward. In a play with music, the music takes place in context, with characters singing in a way that would make sense in real life, and don't sing as the character. If you take the music out of a play with music, it still makes sense, although some of the impact is lost. If you take the music out of a musical, the story no longer makes sense.