"Jersey Boys" at the Orpheum Theatre 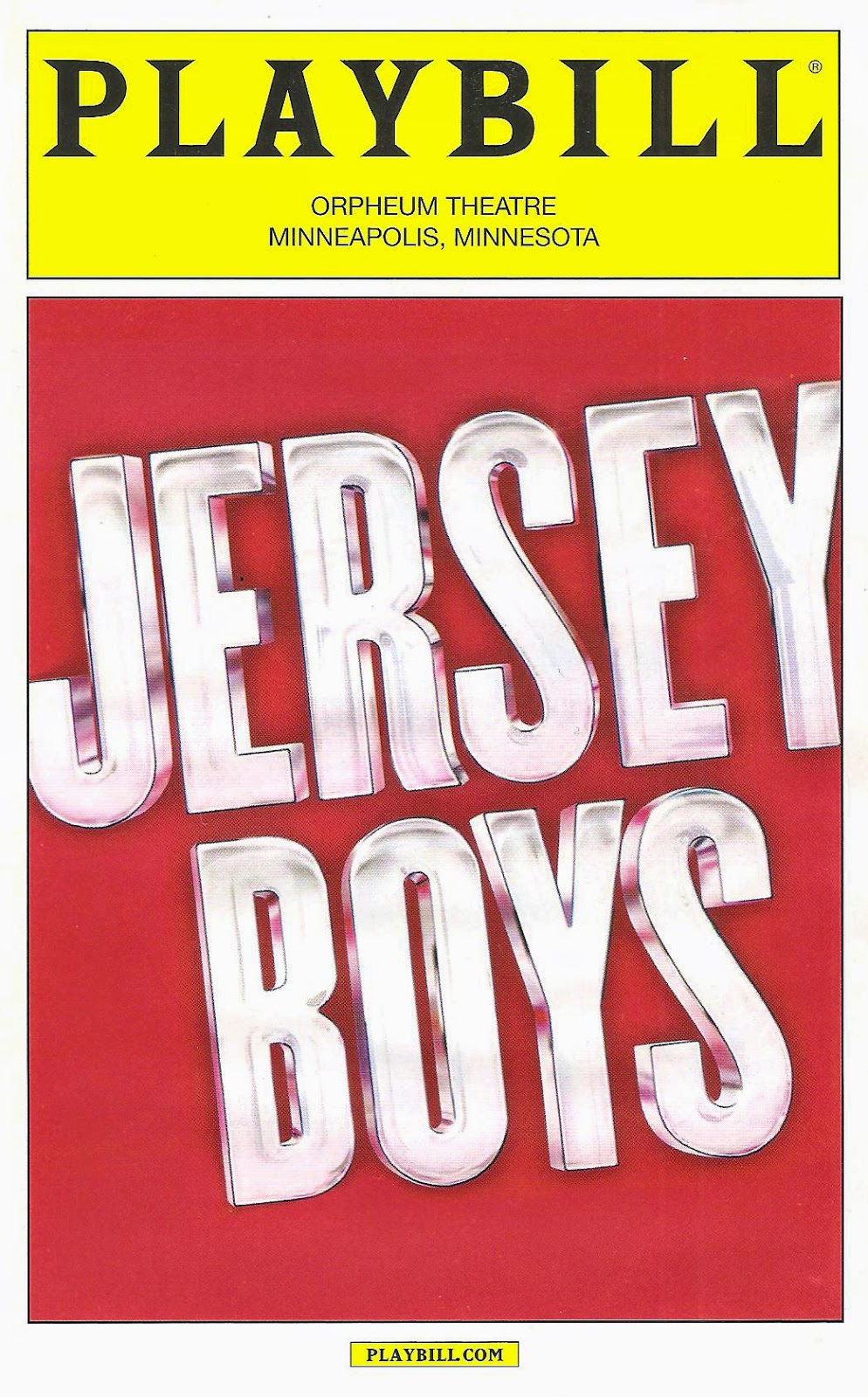 The jukebox musical Jersey Boys is a crowd-pleaser. The story of Frankie Valli and the Four Seasons will celebrate 10 years on Broadway this fall and the tour is making its third stop in Minneapolis this week (at least that's how many times I've seen it). At times during last night's opening night, the crowd reacted like this was a Four Seasons tribute concert. But it's so much more than that. This jukebox musical is not just hit after hit strung together with some loose threads we're supposed to accept as a plot. Rather this beloved and familiar music is woven into the true life story of the rise and fall of these Hall of Fame rock-and-rollers. It's like an episode of VH1's Behind the Music, revealing that all was not rosy behind those crisp harmonies and sharp dance moves. Fame and celebrity at a young age rarely lead to a smooth road in life. Any show that featured a string of hits from the '60s would be sure to sell out to a population dominated by baby boomers, but it's the clever book that weaves the hits together and tells a story worth hearing that is responsible for Jersey Boys' critical success and staying power.

Book writers Marshall Brickman and Rick Elice used the title of the group as inspiration for the structure of the musical. The Four Seasons' story is told in four chapters by each of the group's original members. Founder Tommy DeVito narrates the "spring" of the group's life, in which he and his friends are in and out of jail, working with the mob on the streets of New Jersey. He tries several different band arrangements, all centered around the sweet falsetto of young Frankie Valli. Eventually he hits upon a winning combination, adding bass player Nick Massi, songwriter Bob Gaudio, and producer Bob Crewe (Gaudio and Crewe are credited with writing the music and lyrics for the show). "Sherry" is their first number one hit, and the group's fame skyrockets as Bob Gaudio takes over the narration in the "summer" chapter. More hits, television appearances, adoring fans - their dream has come true. But things begin to "fall" apart as tensions within the group rise and Tommy's large debt is revealed. In the second act Nick takes us through this stage of the journey that leaves only Frankie and Bob left in the group. Finally, Frankie narrates the group's poignant final chapter, "winter," that sees much loss but eventual reconciliation as the group reunites for their 1990 Rock and Roll Hall of Fame induction. It's a roller coaster ride through fame, success, and their aftermath.

The Four Seasons had dozens of hit songs in the '60s, and many of them are included in the musical. "Big Girls Don't Cry," "Walk Like a Man," " My Eyes Adored You," " Beggin'," and "Can't Take My Eyes Off of You" to name just a few. With a few exceptions, the songs are not sung in that musical theater "I'm breaking out in song in the middle of a conversation and singing my thoughts and feelings" sort of way, but rather within the context of a concert, rehearsal, or recording session, so that it falls more towards the "play with music" end of the Cherry and Spoon music-theater spectrum.* This musical isn't structured in the typical scene-song-applause kind of way; the music is woven organically into the story, and sometimes we just hear snippets of songs interspersed with narration. The audience isn't given a chance to applaud at the end of every song, so when the first big number came towards the end of the first act, as the boys sang "Sherry" and paused after that final note, the audience burst into enthusiastic applause we'd been holding in for the first part of the show.

This touring cast is quite awesome; the four leads are sharp and funny and sound fantastic delivering that trademark Four Seasons sounds. Hayden Milanes takes Frankie from a naive kid to a weary man at the end of his career, who never stops working on the dream. And that voice! Frankie Valli's distinctive voice is hard to imitate, and Hayden doesn't just do that, but brings his own smooth sound (he shares the role with alternate Miguel Jarquin-Moreland, who performs one of the two shows on Saturdays and Sundays, because no human voice should be asked to accomplish this feat twice a day!). Matthew Dailey is a lovable rogue as Tommy, imbuing the role with enough charm that we overlook Tommy's shortcomings. Keith Hines's Nick is the strong silent type, with a deep voice and distinctive way of clipping his words when he does speak. Drew Seeley has a sweet voice (singing my favorite song "Cry For Me") and innocent charm as the young Bob, who matures over the course of the show into the brains behind the group.

The entire ensemble is fantastic, playing multiple roles (and sometimes instruments). It's worth noting that only three women (Jaycie Dotin, Marlana Dunn, and Leslie Rochette) play all of the women in boys' lives, and they had a lot of women in their lives - wives, lovers, daughters, singers. You'd think there were a dozen women in the cast as these three don a new personality with every new wig and fabulous '60s outfit, making each a full character in a limited amount of time. Last but not least is Barry Anderson as Bob Crewe, stealing scenes as the flamboyant (in a somewhat restrained '60s sort of way) producer.

Of course these great songs wouldn't amount to much without a band behind them, and this Jersey Boys has a great one. Some of the band members are seen on stage throughout the show, particularly Mark Papazian on drums, who must get dizzy as he's wheeled on and off stage in different configurations. The horn section has their moment too, but after the curtain call is when the band really gets to rock out as they all come out on stage and play the audience out. They are some fierce musicians, and it's a shame most of them are hidden backstage somewhere for most of the show.

The story takes place in a variety of locations represented on a mostly sparse two-level set. For their TV appearances, we're watching the guys sing into the camera on the side of the stage while the video is projected on a screen at the back of the stage. The configuration then shifts so that they're singing out from the stage, as we willingly play the role of the audience. The entire thing is really smartly structured. Another nice touch are pop art illustrations on the video screen that are used sparingly to convey scene or tone.

Jersey Boys is a delightfully fun and entertaining night at the theater due to familiar great songs sharply delivered by the cast and band. But it's more than that - it's a human story told through music, which is what musical theater is about, jukebox** or no (continuing through this weekend only at the Orpheum Theatre in downtown Minneapolis).


*The Cherry and Spoon Music-Theater Spectrum (TM pending): in a musical, characters sing in character, expressing their emotions and moving the plot forward. In a play with music, the music takes place in context, with characters singing in a way that would make sense in real life, and don't sing as the character. If you take the music out of a play with music, it still makes sense, although some of the impact is lost. If you take the music out of a musical, the story no longer makes sense.
**I'm looking forward to seeing what sounds like another well-done jukebox musical, Beautiful, featuring the music and life story of Four Seasons contemporary Carole King, at the Orpheum next season.