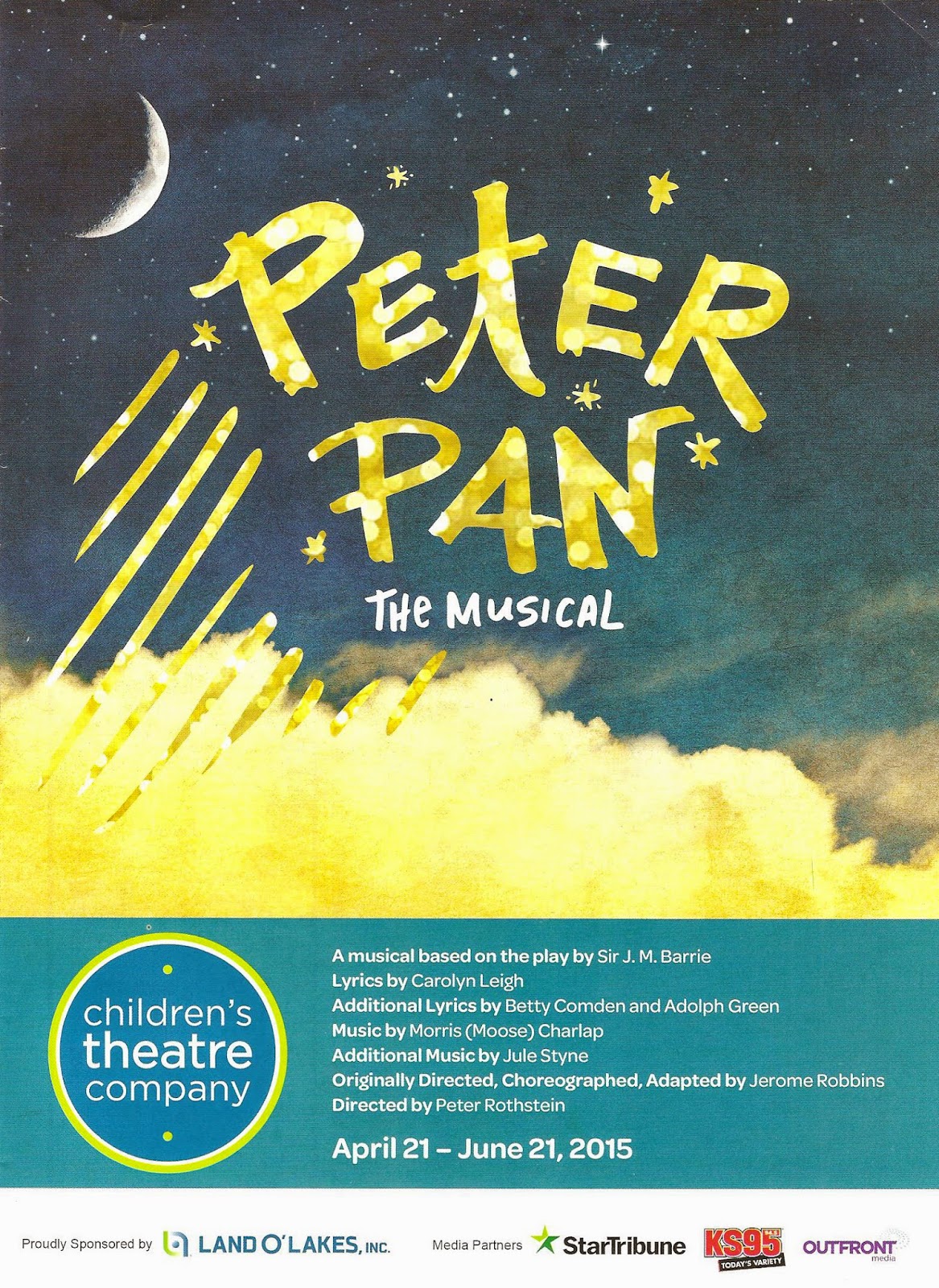 Being a grown-up is hard. You have to be concerned about things like bills, a job, a house, traffic, the deterioration of the environment, and violence and injustice in our backyards and around the world. It's really a drag - no wonder Peter Pan doesn't want to be one! And while we boring and worried grown-ups don't have the option of returning to a blissful childhood, we can go to the Children's Theatre Company and forget about all of our grown-up worries, remembering and reveling in the joy and freedom of youth. What better choice for CTC, then, than the musical adaptation of J.M. Barrie's iconic tale about the boy who won't grow up? Kids love it because they see themselves in Peter, and we grown-ups see an even deeper meaning in the story as we watch the children around us grow up in an increasingly dangerous world, and long for our own days of innocence. It's a perfect choice perfectly executed by the entire cast and creative and technical teams. This Peter Pan is something quite magical, and quite simply the best thing I've seen at CTC.

In the classic story, Peter Pan lives among the fairies in a place called Neverland. He visits the nursery of Wendy, John, and Michael, and flies them to Neverland where Wendy and Peter play at being Mother and Father to a group of boys. The dream doesn't last, as Wendy misses home and Peter realizes that it has become a little too close to the grown-up real life. Wendy and the boys return home, but not before they're kidnapped by Peter's nemesis Captain Hook and his band of pirates. Never fear, Peter is there to save the day with his new friend Tiger Lily.* Back at home with their parents and beloved dog Nana, Wendy and the boys grow up, but never forget their adventure with Peter Pan, who continues to be a beacon to children everywhere.

The role of Peter Pan is often played by a woman, which you will forget all about after you see Tyler Michaels' genius performance (which has become expected from him). Tyler's aerial skills, youthful charm, strong voice, and undeniable chemistry with his costars make him the perfect choice for Peter. He flies around the stage as if by magic, doing flips and tricks mid-air, landing lightly on any surface (I've previously noted that he doesn't seem to be bound by the laws of gravity that inhibit us mere mortals). But tricks aside, he also imbues Peter with a natural joy and boundless energy, and a tender damaged heart when he thinks about the life he's given up.

But Tyler's not the only star in this cast. Alanna Saunders gives a rich and lovely performance as Wendy, Meghan Kreidler is bright and fearless as Tiger Lily, and Reed Sigmund as Hook and Dean Holt as Smee are the perfect comedy duo, a dance honed to perfection after years of working together as CTC company members.

Another reason that Peter Pan is a perfect choice for CTC is that there are many roles for children in the cast. CTC doesn't just provide the highest quality entertainment for children, they includs children in the creative process, giving children an opportunity to learn and play alongside the best professionals in our community, growing the next generation of theater artists (e.g., Maeve Moynihan and Brandon Brooks). The child actors at CTC are always so engaged and enthusastic, never more so than in this production, from the darling Darling boys, to the sweet and funny Lost Boys, to the fierce snarling Pounce-girls. It's an absolute delight to watch each and every one of them in their natural and present imaginative play.

I hadn't read the playbill before the show, but as soon as I saw Peter and Tiger Lily's percussive dance to the "Ugg-a-Wugg" song (with the offensive lyrics replaced by a vow of friendship*), I knew the choreographer must be Joe Chvala. His dance company is called the Flying Foot Forum, so it's a natural fit. The greatest moments of the show are the group scenes - Tyler and his mini-mes as one jolly band of boys (including an inventive routine using large exercise balls), and Tiger Lily's cat-like Pouncers. And when all of them are on stage together, it's gloriously organized chaos.

Whether or not you have children, CTC's production of Peter Pan, directed by that other magical Peter - Peter Rothstein, is a completely wonderful and joyous journey into the imagination, freedom, and poignancy of childhood. But yet we're still reminded that it must only be a dream, although a pleasant one, to remain a child forever. We must grow up, but thanks to CTC, Neverland is never very far away. Peter Pan continues through June 21.


*Read about the changes that CTC made to the script around the character of Tiger Lily here.