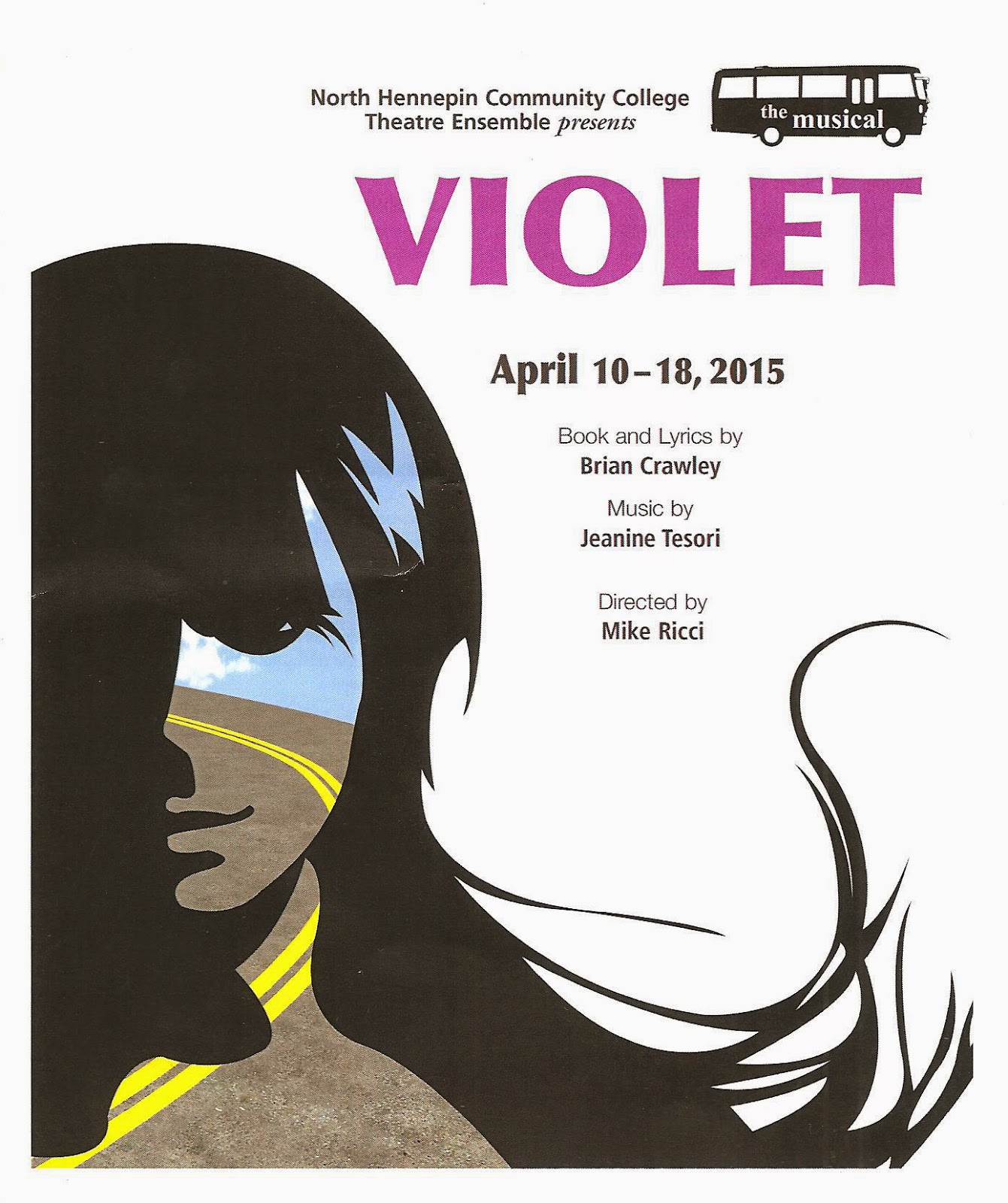 I was given a tip that I should check out the theater department at North Hennepin Community College, a group I didn't even know about it despite working at an office just a few blocks away from their Brooklyn Park campus for five years. When I heard that their current production was the lovely and moving musical Violet, I was in! I fell in love with this piece when I saw Theater Latte Da's simply beautiful production five years ago. This is one of those productions that stands out very clearly in my memory, despite the fact that it was before I started blogging (I started Cherry and Spoon a few months later, and included Violet in my favorites list at the end of the year). This Jeanine Tesori/Brian Crawley musical premiered Off-Broadway in 1997 and just last year made it to Broadway starring Sutton Foster and Joshua Henry, with just a few changes*. I was lucky enough to see that production, coincidentally exactly one year ago. While there are a few bumps in the NHCC production, I enjoyed it very much, and the bottom line is it brought out all the feelings in me that this gorgeous score and poignant story always does.

Based on a short story, Violet is about a young woman on a journey across the South in 1964, from her home in the mountains of North Carolina to Tulsa, Oklahoma, where she hopes that a TV preacher can heal the scar she received in a childhood accident. Growing up with this disfiguring facial scar has made Violet tough and independent, and she's not afraid to look people in the eye and tell them what she thinks, even if they're unable to return her gaze. She befriends several people on the long bus trip, including a couple of soldiers named Monty and Flick. While journeying to what she hopes is a new beginning, she remembers her past journeys, and we see flashbacks of the young Violet. The two realities merge when Violet meets the preacher, doesn't find what she hoped she would, and is forced to face her past on her own. Like Dorothy in The Wizard of Oz, she has to go an epic journey to learn that she had the power all along to heal herself.**

Jeanine Tesori's score combines sounds of the South and the '60s - gospel, bluegrass, country-western, Memphis, and Appalachian mountain music - sounds that I happen to love. The eight-piece onstage band, directed by Michael McDeid, sounds great, and the 11-person cast really shines in the beautiful harmonies of the group numbers. But the star of the show is Jenny Reierson as Violet, who brings out every emotion of Violet's journey with her lovely voice and natural onstage presence. I fully expect to see her on local stages after she graduates from NHCC. Other highlights in the cast include the charming 13-year-old Grace Annabella Anderson as young Violet; Zarah Nesser, who brings humor and poignancy to the role of the "old lady" on the bus; and Josh Groban look-alike John Naumann as Violet's tough and tender father.

Moral of the story - check out what's going on at the theater department of your local college. This is the training ground for our rich theater community, and you might just see some stars in the making. Just the fact that director Mike Ricci chose the little-known gem Violet, rather than yet another production of Guys and Dolls or Oklahoma, shows me that NHCC is taking risks and challenging themselves, which I applaud.


*You can read my thoughts about the changes from the Off-Broadway to Broadway versions (which is the version that NHCC is doing), including the one ill-advised song swap, here.
**This paragraph is borrowed from my review of the Broadway production of Violet last year.