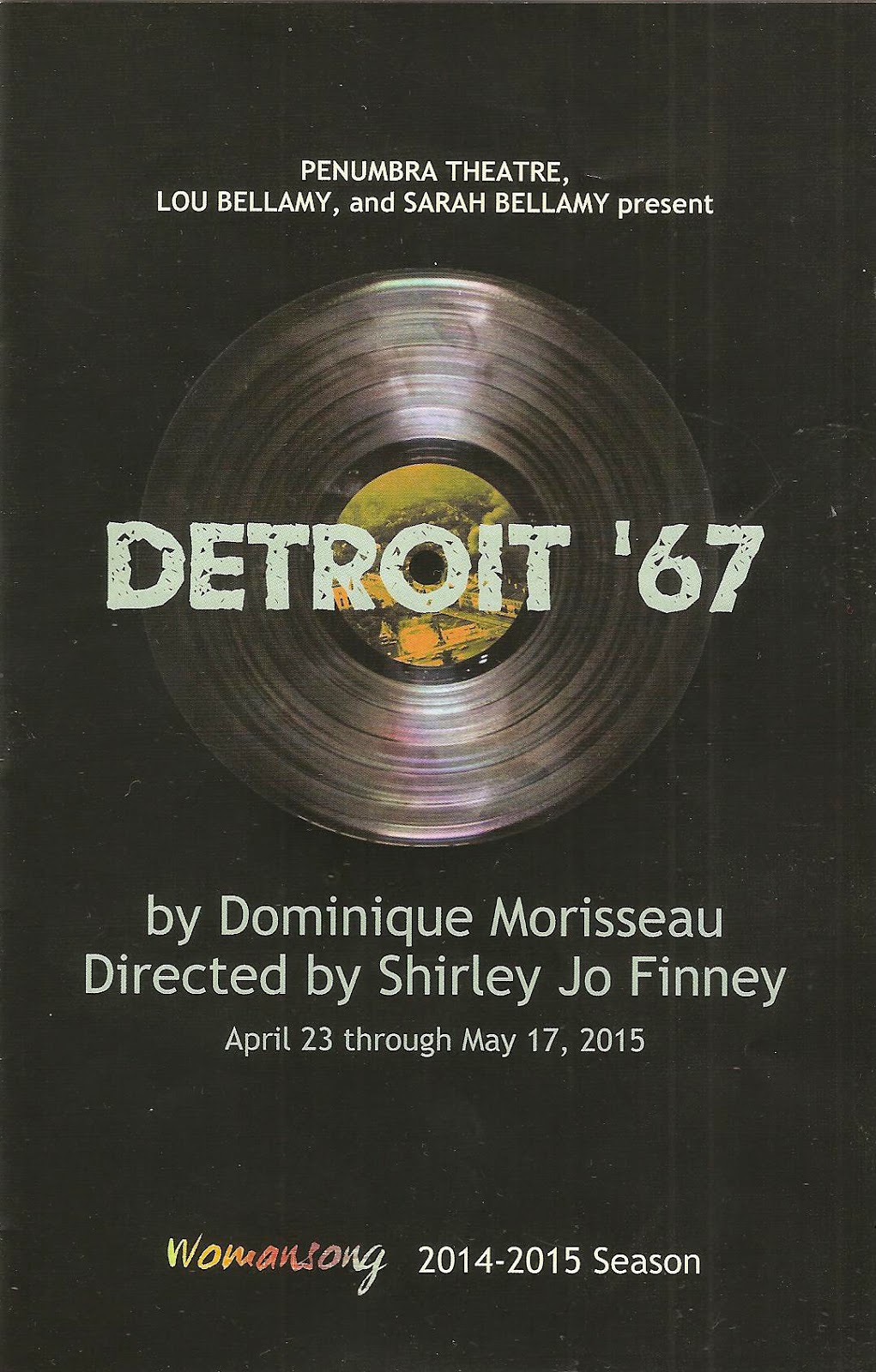 1967 Detroit was one of the high points in American music with the boom of the Motown sound, including such greats as The Temptations, The Supremes, Marvin Gaye, and little Stevie Wonder. But it was also one of the low points in American racial tension, as manifested in one of the largest riots in history that ended with over 40 people killed and over 1000 injured. The new play Detroit '67 by Dominique Morisseau nicely juxtaposes these two worlds as they come together in a clash of music and violence, as seen through the lives of one family. Featuring a super cool soundtrack and a strong five-person cast, Detroit '67 is as much fun and entertaining as it is sobering and thought-provoking.

Sister and brother Chelle and Lank have inherited their deceased parents' home and a little money. With the help of their friends Bunny and Sly, they've turned the basement into an occasional dance club, to enjoy music with their friends and make a little money to help with Chelle's son's education. The widowed Chelle is happy with the simple life, keeping a nice home and making some extra money to send to her son, but Lank longs for something more. When Sly asks him to go in with him to invest in a local bar, Lank jumps at the chance despite his sister's objections. While out one night, Sly and Lank come across a mysterious and injured young white woman and bring her back to the house to recover. Chelle is not happy with this, knowing the trouble it could bring in segregated Detroit, but reluctantly agrees to let the girl stay if she helps around the house. She has a past that, when she reveals it to Lank, bonds the two of them. When the riots start, Lank and Sly are right in the middle of it, trying to protect their new business. It doesn't end well, but no matter what happens, the music lives on. And so do these people, as best they can.

As Chelle and Lank, Austene Van and Darius Dotch are believable as siblings who love each other even when they're annoyed with each other, and also create strong individual characters. Austene's Chelle is guarded but seemingly content with her life, not wanting to change or take a chance, until she begins to open up culminating in a beautiful final moment. Darius' Lank is ambitious and bristles at the unfairness of life. James T. Alfred as Sly is as smooth as his suit, and easily charms both siblings. Jamecia Bennett is a hoot as the flamboyant Bunny, and Elizabeth Efteland is appropriately enigmatic as the mysterious stranger who's obviously had a tough life and is looking for more. Under Shirley Jo Finney's direction the five play, argue, and dance well together.

I'm a sucker for period costumes and sets, and the late '60s is one of my favorite eras. This Detroit basement may be about as far away as you can get from the Madison Avenue of Mad Men, but it's super fabulous in its own way. Firstly, Mathew LeFebvre's set is incredibly detailed and lived in, like it was transported in a time capsule from 1967. And while I missed the '60s by a few years, I still reveled in the nostalgic familiarity of the shag carpet, wood paneling, 8-track player, knitted afghan on the couch, and bright clashing colors, not dissimilar to my own basement as a kid. I only wish mine were this cool! Aaron Chvatal's costumes are also super fabulous, from Sly's smooth suits, to Chelle's casual wear and flats, to the dressed-to-the-nines Bunny, bedecked in bright and colorful dresses, with matching fab shoes that I covet, and plenty of bangles. And while part of me wanted to see that basement dance party in all its style, it's nicely hinted at by dancing shadows on the wall (video and sound design by Martin Gwinup, whom I assume is also to be thanked for that fabulous '60s soundtrack).

Penumbra always does top quality work, and often educates me about parts of our history of which I am unaware, like the 1967 Detroit riots. It's one of my favorite things about theater - a chance to be entertained while also learning something new, empathizing with characters, and pondering what it all means and how it relates to the world (black men being killed by cops is sadly not a relic of the past). Detroit '67 continues at St. Paul's Penumbra Theatre through May 17.