"The Crucible" at the Guthrie Theater 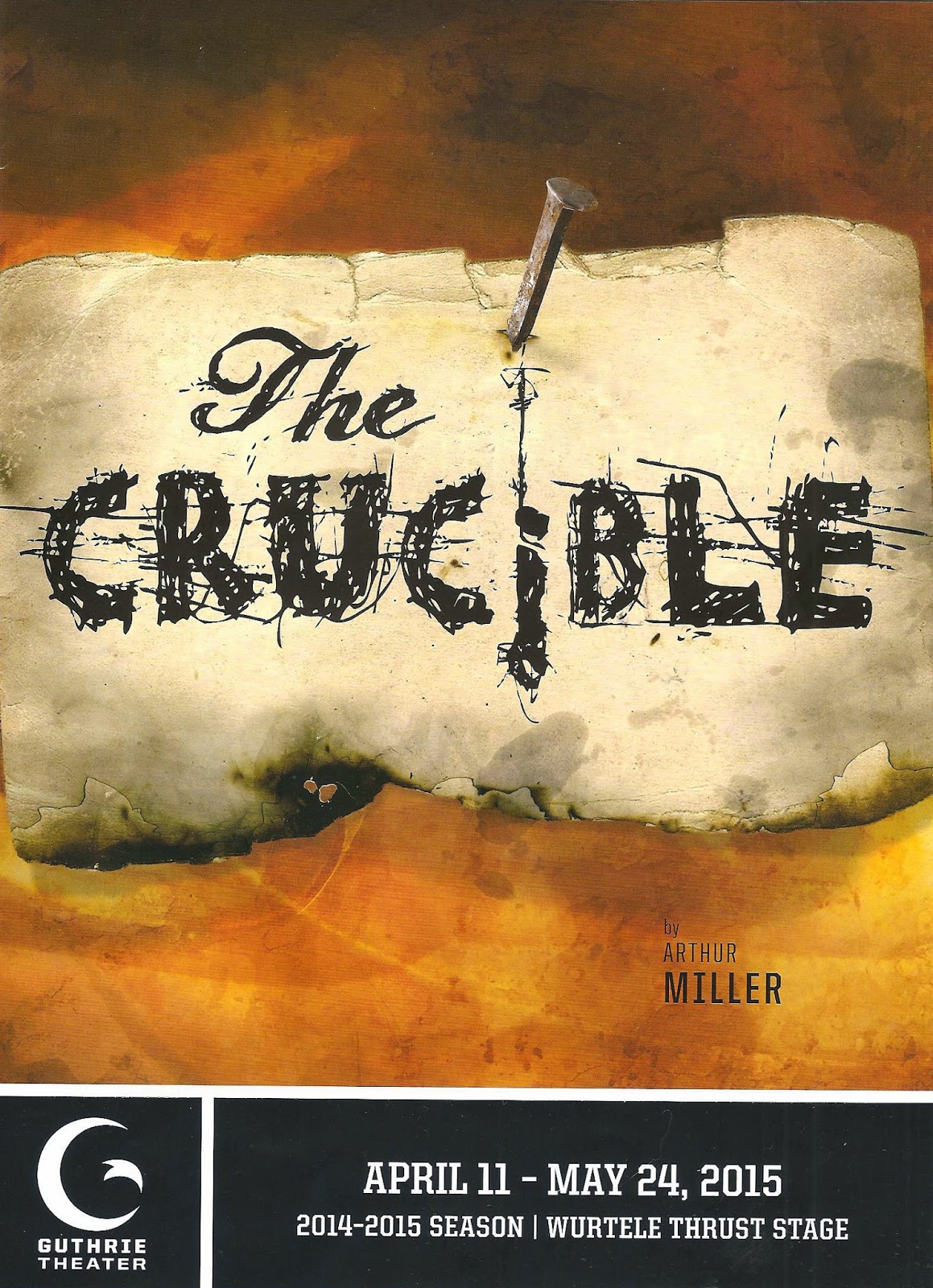 Arthur Miller's 1953 play The Crucible is a classic of the American theater, and dramatizes one of the greatest failings of the American, or rather pre-American, judicial system. During the infamous Salem witch trials of the late 17th Century, twenty people were put to death for the crime of witchcraft, following a long history of the execution of "witches" in Europe. Arthur Miller explores the larger themes of this horrible incident through a very personal story of one affected family, making the play at once intimate and epic. Despite being over 60 years old, the themes of religious fanaticism, mob mentality, and persecution of people who are different are sadly as current as they were during the McCarthy era when the play was written. The Guthrie's grand production of this classic with a cast chock-full of talent is truly something to behold. It's long and intense, but somehow the nearly three hours didn't feel long to me; I was engaged every minute by this compelling story and these beautifully flawed and human characters.

The story begins when the Reverend Parris discovers several young women, including his daughter Betty and niece Abigail, dancing in the woods. Yes, dancing! Betty is afflicted by a strange illness that is blamed on the family's Barbadian slave who is accused of conjuring spirits. In what amounts to a harmless prank gone horribly wrong (never underestimate the power of teenage girls), the girls continue to accuse more and more people of witchcraft, who are given the option of confessing or hanging. The whole thing spirals out of control and Abigail soon accuses her former employer/lover John Proctor's wife, an honest and well-respected woman. John attempts to defend his wife but is powerless against the mass hysteria that has overtaken the community. But somehow in the midst this devastating event, he's able to face the truth and become the best version of himself.

This is a huge play with many characters but just four long scenes, each of which is like a mini play in itself with several different segments and lots of people entering and exiting. All of it is beautifully orchestrated by the Guthrie's departing Artistic Director Joe Dowling. Joe has directed several Arthur Miller* plays at the Guthrie in his 20-year tenure, but this is his first time doing The Crucible here, and it's a beautiful swan song. The 20+ person cast truly is an embarrassment of riches. There are so many wonderful, experienced, beloved actors who pass through the story for just a moment or two. I'm wondering if some of them took the role just to be part of one of Joe Dowling's last productions at the Guthrie.**

This production reunites Mr. and Mrs. Macbeth from the 2010 production at the Guthrie (one of my favorites that year) as Mr. and Mrs. Proctor. Michelle O'Neill gives a quietly powerful and emotional performance, and Erik Heger is, as he was five years ago, just magnificent. John Proctor is the kind of role that covers the full range of emotions, from angry to devastated, proud to broken, and Erik hits every note. So raw, so emotional, he has the audience in the palm of his hand in the final climactic scene.

Other highlights in this huge and talented cast include: Stephen Yoakam, always a strong and formidable presence onstage and therefore a perfect choice to play the deputy-governor in charge of the legal proceedings; beloved Guthrie vet Peter Michael Goetz, bringing welcome comic relief through the role of Giles Corey, who was tried along with his wife; the great Wendy Lehr, who could bring comfort to any bewitched person, as noble accused Goody Nurse; and several graduates and students of the U of M/Guthrie BFA program (aka the Guthrie's rich farm system), including Chloe Armao as instigator Abigail Williams, and Ashley Rose Montondo, going from sane and sympathetic friend of the Proctors to full out crazy as Mary Warren.

For the opening dancing-in-the-woods scene, a dozen or so large heavy trees hang just above the stage, their roots not quite touching. They are then raised to the ceiling and hang over the rest of the proceedings like a dark cloud. Ominous sounds and lighting add to the somber and heavy mood (set, lighting, and sound by Richard Hoover, Mark McCullough, and Scott W. Edwards). Jane Greenwood's prim and proper period costumes look so authentic you feel like you're right back there in 1692.

As a theater geek I should have seen this play before now, but I have not, and only have vague memories of the 1996 movie starring Daniel Day-Lewis and Winona Ryder. Now I get why it's such a classic - an important and frightening incident in our history that still has echos in today's world, a personal story of one man's struggle with honor, faith, and redemption, an intense and compelling three hours of theater. It's also a powerful argument for why the separation of church and state is absolutely essential and one of the best things about this country, so that no one person's religious belief is allowed to take away the rights, or in this case the life, of another person who's seen to be in some way evil under that belief.

The two shows on the Guthrie's main stages right now are on opposite ends of the spectrum. Mr. Burns, A Post-Electric Play on the Proscenium Stage is a new, modern, creative, and innovative play. Across the lobby on the Thrust Stage, The Crucible is a fine and faithful production of a beloved and acclaimed classic. For traditional theater excellently executed with a huge cast full of mostly local talent and top-notch production values, it's a play not to be missed (playing now through May 24).


*Read more about Joe Dowling and the Guthrie Theater's relationship with Arthur Miller here.
**The Guthrie will celebrate Joe Dowling in a gala performance on June 6 - limited seats still available.