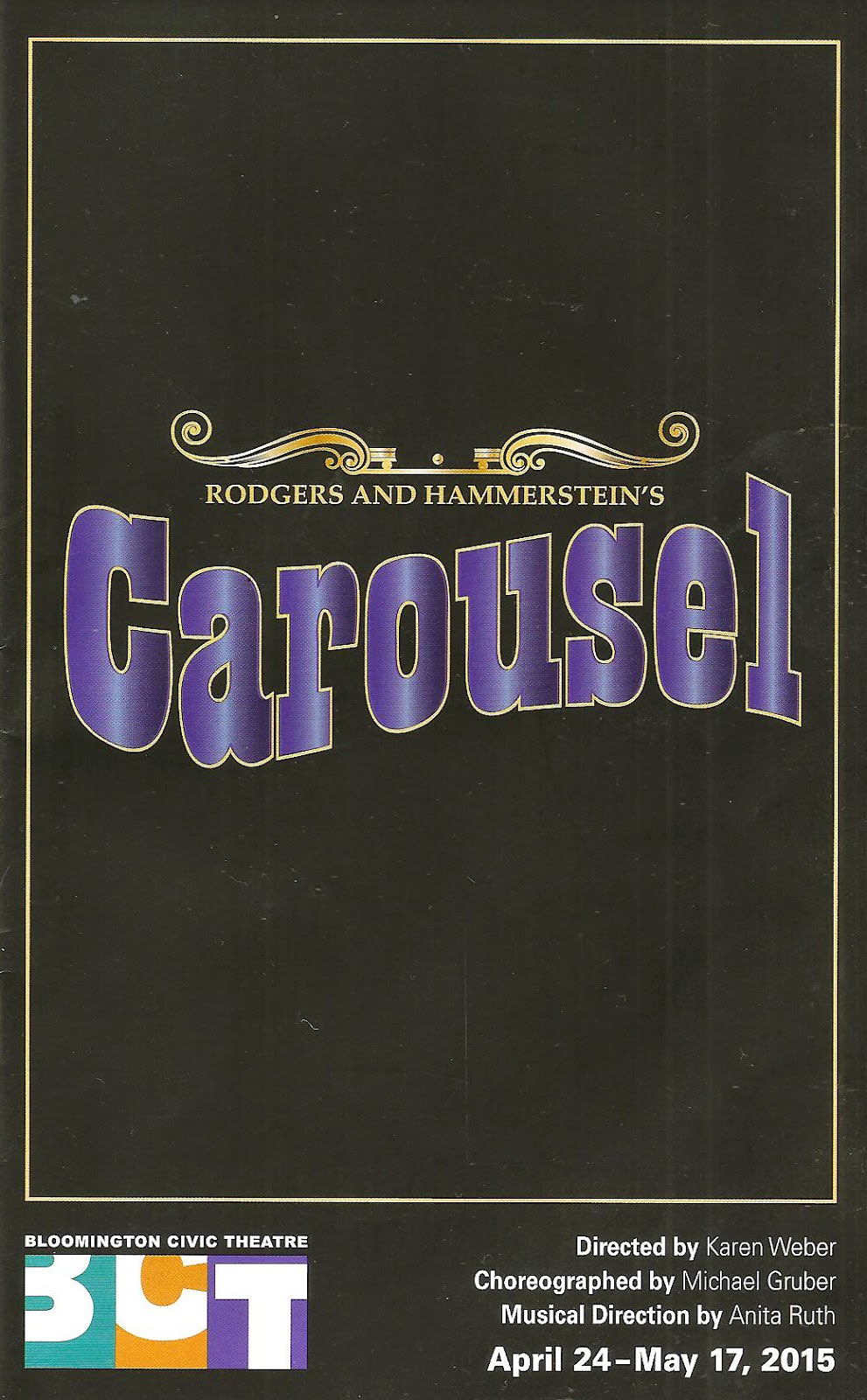 When Bloomington Civic Theater announced their 2014-2015 season last year, I was thrilled to see that the Rodgers and Hammerstein classic Carousel would be closing out the season. As a musical theater geek, this is one of those shows that you really must see, and I hadn't. But it turns out BCT was not my first Carousel; the Minnesota Orchestra presented a semi-staged concert of it last month. I found the music to be gorgeous and the story to be... challenging. I was happy to have another experience with the show again so soon and more time to spend with it. After seeing BCT's beautiful production, I appreciate this show even more. The music is gorgeous as performed by this spectacular cast and always fantastic pit orchestra, and they nicely handle the difficult issues of the play, namely domestic violence. There's a reason Carousel is a classic, and BCT makes that very clear.

For Rodgers and Hammerstein's sophomore outing as a team (their first being the smash hit Oklahoma!, based on the play Green Grow the Lilacs), they chose to adapt the lesser-known Hungarian play Liliom as Carousel, which was a bit of a gamble due to the darker nature of the story and not-so-happy ending. But the risk payed off; Carousel was another rousing success and ranks among R&H's big five musicals. This is the classic good girl falls for bad boy story, in which the good girl sees the best in the bad boy, and the bad boy tries to be a better person for the good girl, but ultimately fails despite his love for her. In this case the good girl is mill worker Julie Jordan and the bad boy is carnival barker Billy Bigelow. Although perhaps he's not so much bad as putting on a tough front to hide a deeply damaged soul. They both sacrifice their jobs to be together, which unfortunately does not lead to happiness for the pair. Through an unfortunate series of events Billy sees the errors of his ways and tries to make amends with his family.

Because of its themes of poverty and domestic violence, this a difficult story. But I was thrilled that BCT has cut what I see to be the most offensive and potentially damaging line, the one in which Julie tells her daughter that it's possible to be hit hard and it doesn't hurt. It most definitely does hurt when someone you love hits you, in more ways than one. It's hard enough to come to terms with the idea that even though he hits her, Billy and Julie truly love one another, without the implication that the abuse doesn't hurt. Simply removing this one line makes a world of difference, and turns a story that possibly excuses domestic violence into one that tries to get inside it and understand it in the hopes of shedding light on this issue that is as devastating today as it was 70 years ago when the musical was written, or 140 years ago when the story takes place.

And now that we've gotten the difficult part out of the way, let me rave about this cast! Firstly, our Billy, Dominique Wooten. According to his bio this is Dom's first leading role on a Twin Cities stage (although he has been sharing his talent in supporting roles at BCT and elsewhere for a few years), and I cannot think of a better debut. His voice is gorgeous and his performance of the famous "Soliloquy," covering a range of emotions and vocal challenges, is a triumph. He handles the difficulties of the role (Billy isn't really someone you're supposed to like) with grace, and brings out the humanity in this troubled man. He's well-matched in Elizabeth Hawkinson as Julie, her first time on the BCT stage. Her voice is beautiful, and her Julie is strong, compassionate, vulnerable, and completely believable. Becca Hart is also making her BCT debut as Julie's best friend Carrie, and she's a delight. Rounding out the two main couples is Joshua Smith (last year's Sky Masterson), sweet and charming and well-voiced as Mr. Snow. You really cannot ask for better leads than these four, and the supporting cast and ensemble are strong as well. Of special note is ten-year-old Natalie Tran playing the Star Keeper, a role not typically played by a child, bringing a whole new dimension to the role.

Carousel is a show that's heavy on the dancing, with the opening number being an eight minute waltz with no words that manages to convey everything about the setting and characters that you need to know. The second act also includes an extended ballet that introduces a new set of characters. Choreographer Michael Gruber and director Karen Weber nicely structure both of these segments and the cast performs the choreography beautifully, especially the graceful young Megan Carver as Louise.

If you're a musical theater fan who's never seen Carousel, like I hadn't before this year, you really must go see BCT's excellent production of this classic. And even if you've seen it before, it only gets better and richer with repeated viewing. This is a dark, difficult, devastating love story, but when Billy told Julie "know that I loved you" as the voices of the ensemble rose together in harmony on perhaps the most well known song from the show, "You'll Never Walk Alone," real tears rolled down my cheeks. That's the power of musical theater, to make you feel and empathize and learn something you didn't know before. Carousel continues at Bloomington Civic Theatre through May 17 (BCT shows have a tendency to sell out, so you might want to plan ahead - look for discount tickets on Goldstar).