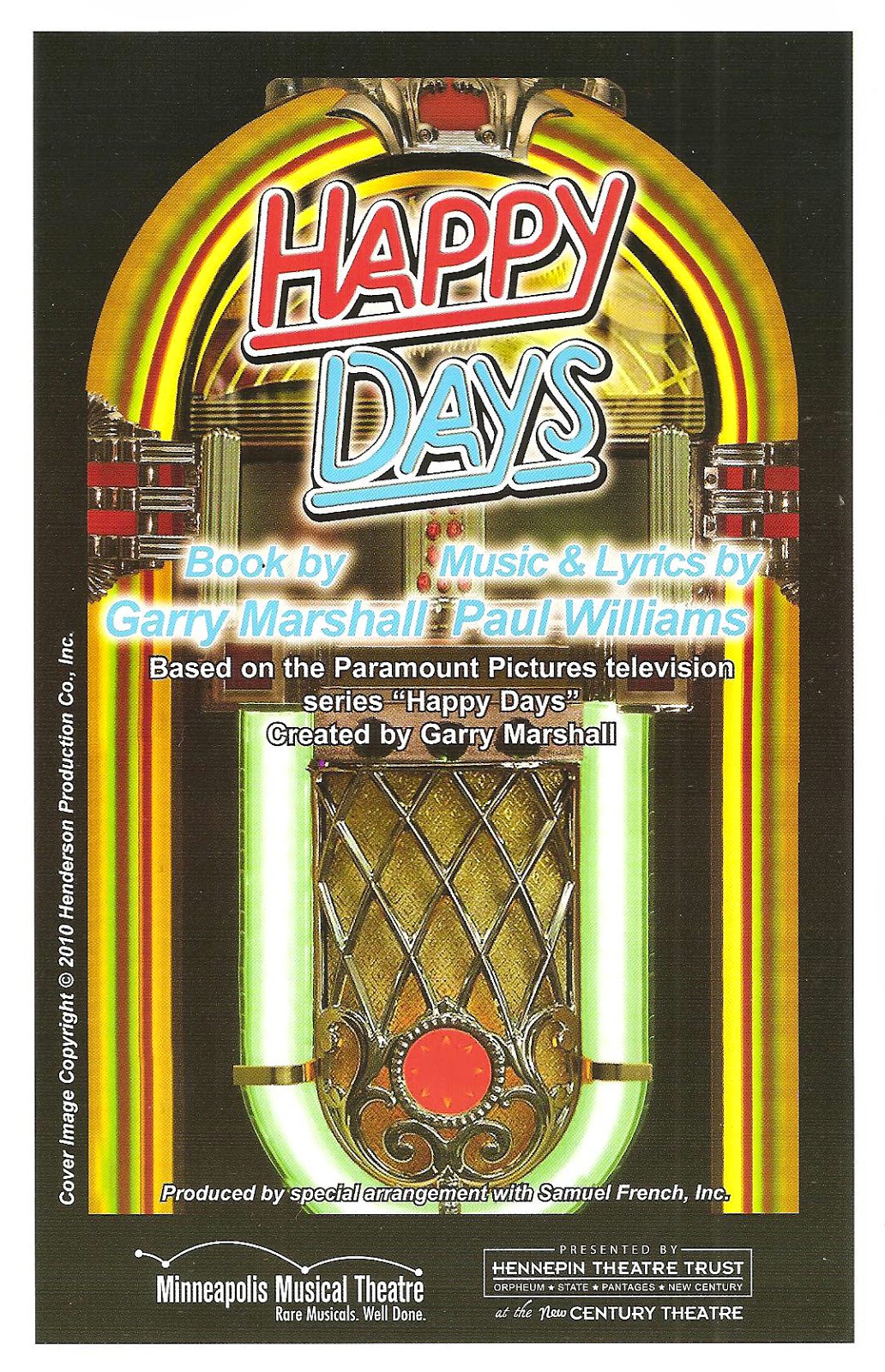 In the space of 24 hours I traveled from 1960s Detroit to 1950s Milwaukee, separated by about 400 miles and 10 years, but worlds apart. Penumbra Theatre's Detroit '67 is a sobering look at the musical highs and violent lows of that time and place, while Minneapolis Musical Theatre's production of the musical adaptation of the TV classic Happy Days presents an idealized version of the past, where people can't imagine the price of gas going above 12 cents, the worst insult is "sit on it," and fights are settled with a pie in the face and a wedgie. As such, it's faithful to the beloved TV show that I, and many Americans, grew up with. Not surprising since it was written by the show's creator Garry Marshall, with songs by Paul Williams, who's written many hits for The Carpenters and others. While the plot's a bit thin (it is based on a sitcom, after all), the familiar characters are there with their signature catch phrases and the songs are catchy in that '50s style, resulting in a fun and frivolous evening of happy nostalgia theater.

In what amounts to an extended episode of Happy Days, our gang is facing a crisis when beloved diner hangout Arnold's is in danger of being bought out by a large corporation. Richie and Fonzie and friends come up with a couple of ideas to raise money to match the bid, including a dance contest and a wrestling match. (How they're supposed to raise thousands of dollars through this, I'm not entirely sure, but I'll go with it.) Fonzie's ex, the super cool motorcycle-riding Pinky, returns to judge the dance conflict, and tensions run high with unfinished business between them. Fonzie agrees to wrestle his nemeses the Mallachi brothers, despite a secret shameful weakness - he has a bum knee. (Fonzie's getting old? How disappointing.) It takes Richie longer than his usual 30 minutes to solve this problem, but in the end our gang comes out on top and continues living those happy days.

Highlights of the show include:
While there are a couple of strange jokes that didn't land well (including one about Bill Gates, who was 4 years old in 1959), and the show goes a bit too far into camp territory at times, on the whole it's joyful homage to a beloved TV show and iconic characters. These Happy Days are yours and mine, and continue at the New Century Theatre through May 17.