"Broadway Songbook: Rock & Roll on Broadway" at the Ordway Center 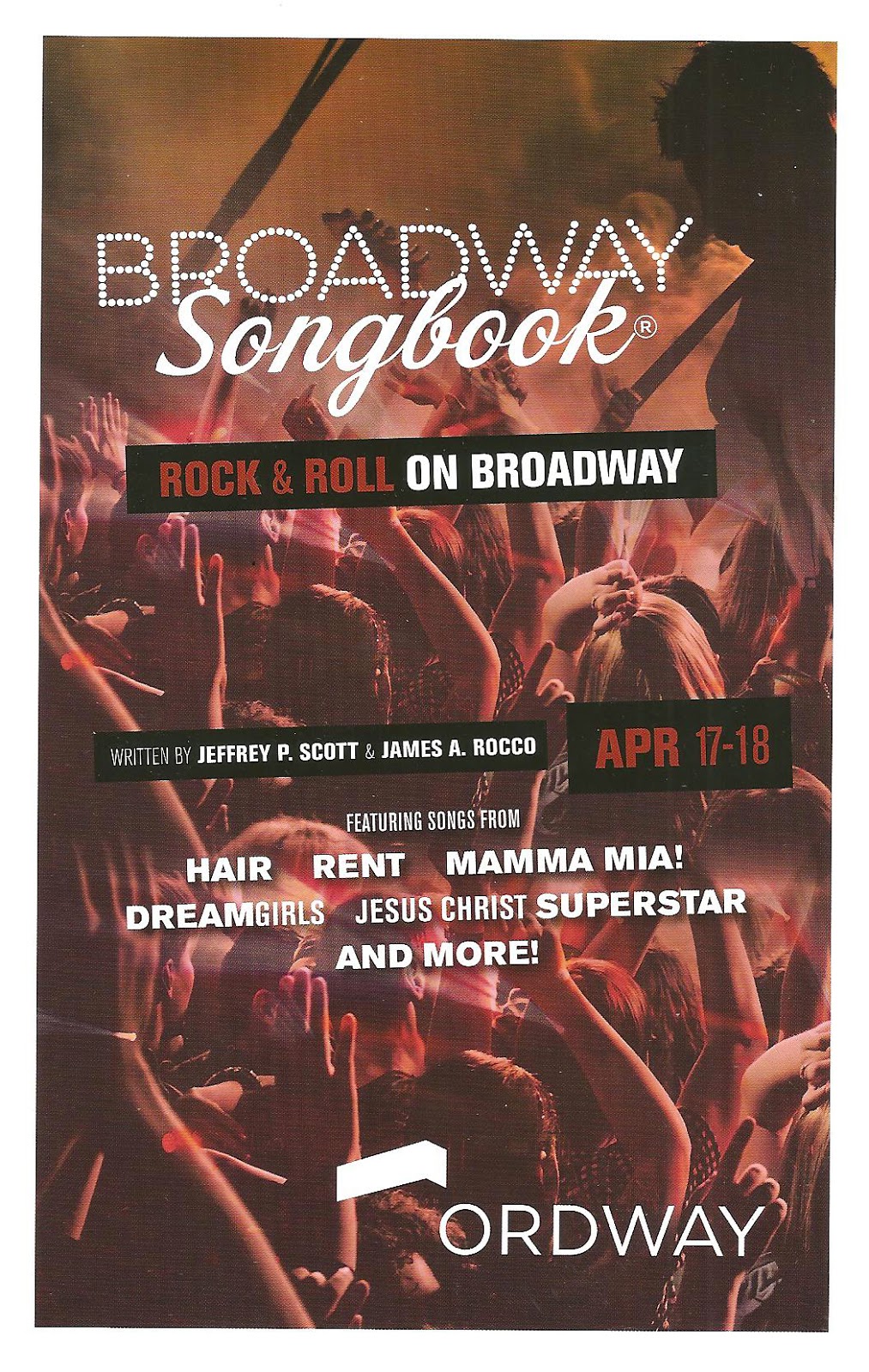 In case the Ordway was not sufficiently rocked in the recent month-long "Rock the Ordway" celebration, the rockification continued with the most recent installment of the Broadway Songbook series, in which Artistic Director James Rocco hosts an evening of musical theater education and entertainment. The theme of this Songbook, which ran for only three performances last weekend (why so short?) is "Rock & Roll on Broadway," not "Rock Musicals," an important distinction. The songlist was comprised of songs not just from rock musicals written for the stage, but also jukebox musicals or concept albums that made it to the stage. A continuation of last fall's "First 100 Years on Broadway," the show focused on rock and pop songs being heard on the Broadway stage in various formats. And as per usual with this series, the result was a marvelously entertaining, informative, fun, informal evening featuring great songs performed by a fantastic cast.

This was my first time in the Ordway's new Concert Hall (a brief detour on the way to see Bernadette Peters notwithstanding), and I found it to be a lovely space. Despite seating 1100 people, it doesn't feel huge, in fact it has a similar intimacy to the old McKnight Theatre, which was demolished to make room for the Concert Hall. In the interim, Broadway Songbooks were presented on the huge stage of the Ordway's main theater, with the audience sitting right on the stage along with the performers on a small stage at the very back of the space. It was fun to be on that stage, but it was a bit of an awkward experience to watch a show there, so I'm happy it's now moved into the Concert Hall. The new space has its own new bathrooms, which is handy, but it would be nice if it also had its own bar and especially box office, to ease the flow of people entering the theater.

But enough about that - on to the show! Host James (who happily can't resist singing a bit) and musical director Raymond Berg (taking the weekend off from his current gig music directing And the World Goes 'Round at the Jungle) are joined by a rockin' band consisting of percussion and two guitars. They have also assembled a dream cast of local favorites. Any day that I can sit in a dark room and listen to Dieter Bierbrauer sing is a good day in my book. So this was a good day, and then some! Dieter was only one of seven amazingly talented performers, including frequent stage partner Randy Schmeling (whom I've seen perform together numerous times over the years including Hair and Power Balladz, more on those a bit later). And then we have Eric Schwab, who is pretty much the best thing ever to happen to musical theater cabarets. She is genius at a very specific and difficult skill - singing comedically. She's absolutely hilarious, singing almost in a campy way sometimes, but yet her voice is never less than perfect, and she does it all in an easy, effortless, fun way that makes it impossible for the audience not to have fun with her. This cast also features Caroline Innerbichler with her lovely voice, infectious spirit, and toned torso (see also The Little Mermaid); the Ursula to Caroline's Ariel - Kersten Rodau of the huge and powerful voice in the tiny body; the adorable and talented Reid Harmsen (who will always be Mark to me); and Yolande Bruce, who is new to me but fits in well with the group and brings her own unique talents.

For this very special Songbook, the cast traded in their usual evening gowns and tuxes for leather, denim, and bare midriffs. They were all in for the rock and roll theme! But the best part is they really performed each song with conviction and emotion, as if it was excerpted from a full production. Many of the songs were so fantastic that I wanted them to continue and do the entire musical! But instead, we got lots of little gems, including:

The Broadway Songbook series is a must for musical theater nerds fans like me, and "Rock & Roll on Broadway" was another great installment! While I would have preferred fewer jukebox musicals and more original rock musicals, I loved every song as performed by this cast and band. The entertaining musical theater education continues this fall with "The 70s Songbook." But before then you can catch not one but two Ordway original productions featuring local talent, hopefully including this cast! Damn Yankees plays in June, and Pirates of Penzance in August. Hooray for "Broadway-style/quality" (whatever that's supposed to mean) musicals produced right here in the Twin Cities!

*You can see Jersey Boys next week, on tour at the Orpheum Theatre.
**Once is returning to Minneapolis' Orpheum Theater this summer.