"The Reagan Years" by Workhaus Collective at the Playwrights' Center 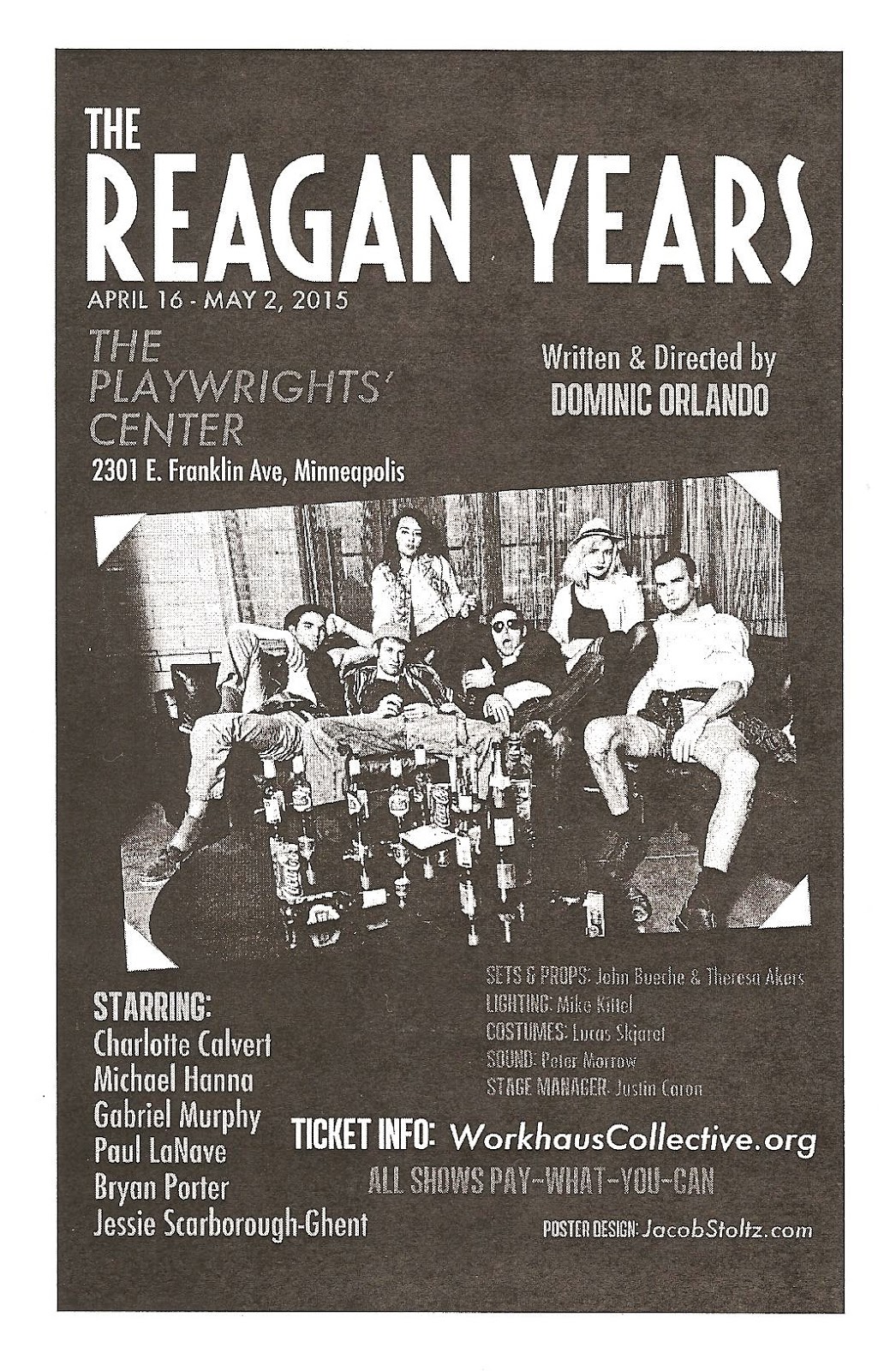 I've never seen the movie American Psycho, but the idea I have of it in my head is similar to what I saw at the Playwright's Center last night. In Workhaus Collective's production of Dominic Orlando's dark new play The Reagan Years, we meet a wealthy young man who appears to be mostly normal on the outside, but is hiding a deep dark psychopathic soul. It's a compelling and fascinating story, well directed by the playwright and well performed by a talented young cast, but it's a hard one to stomach due to the ugly and violent nature of the situation and the characters.

It's 1988, near the end of the Reagan years, and four college buddies are facing graduation and having to leave their free and easy partying college life for the real world. Calling themselves "The Danger Boys" (a name that later becomes startlingly fitting), they live together in a house owned by Guy's father, who runs a large corporation. Guy is the typical spoiled little rich boy, entitled, conceited, generous with his friends but demanding of loyalty almost to the point of subservience. The primary victim of this is young Moth, possessing an artist's soul and a sycophantic love for Guy. Frisbee is the perpetual stoner and party boy, and Walkman is the ambitious one who wants a place in Guy's family's company. On the night before graduation after a weekend of blissfully ignorant partying, the guys find out that there's been a deadly accident involving the company. Walkman convinces Guy to tell him the truth about what's going on, and it's not good. Further complicating matters is Dawn, the hitchhiker that Guy picked up, who seems unusually curious about the company. Things take a dark turn, as Guy reveals his psychopathic nature, and his friends must decide where their true loyalty lies.

The play is tightly written and directed, coming in at under two hours with a brief intermission (necessary for dramatic effect and to give the audience a much needed break). Everyone in this six-person cast (none of whom were probably alive in 1988) gives a well-defined performance as these very different characters caught up in a messy situation. Michael Hanna's Moth is the most sympathetic, as he imbues the young artist with conflicting feelings of loyalty and justice, showing the depth of the love-hate relationship with Guy. Paul LaNave is the comic relief as the loopy goofy Frisbee, Gabriel Murphy expresses Walkman's inner conflict between his ambition and doing the right thing, and Jessie Scarborough-Ghent and Charlotte Calvert have nice turns in the less-developed roles of Dawn and her friend. But this is really Guy's story, dark as it is, and Bryan Porter is scary good as he portrays this rich playboy's descent into madness, making Guy something truly menacing.

The stage at the Playwrights' Center feels like a frat house in the '80s, with all the mess, music, and period clothes. The entire back wall of the stage is covered by the impressive mural that the character of Moth has created - the original US flag created by painted wood slats. Some cool and trippy slo-mo moments add to the mood.

This was a difficult one for me to watch and to write about, to try to make sense of. I suppose it says something about the end of the Reagan years, the danger of capitalism without a conscience (what do I know, I spent most of the Reagan years doing homework and watching sitcoms). If you're sensitive to violence you might want to stay away, although it's worth noting that much of the violence occurs off-stage, yet is still palpably felt. Only four performances of The Reagan Years remain, so make plans quickly if you're interested in a dark and disturbing tale of greed gone wrong.