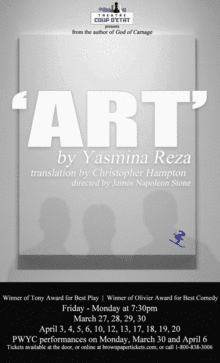 What inspires someone to spend $200,000 on a piece of art, especially one that to others looks like a plain white canvas with some marks in a slightly different shade of white? This question is at the crux of the play Art by French playwright Yasmina Reza, most famous for the play God of Carnage. Both plays won the Tony, and both plays are of the talky variety. Not much happens and the play is pretty much just people sitting around a room talking. But that talking is some pretty deep and intense conversation and confrontation, in this case ostensibly about the nature of art, but in reality more about the nature of friendship. This production by Theatre Coup d'Etat features great performances by the three-person cast in an intimate up-close-and-personal site-specific setting (something this theater company does well) that makes for an intellectually, if not so much emotionally, engaging evening.

We're told that the three characters in this play have been friends for 15 years, although I had a hard time understanding why; there isn't much love lost between any of them. Serge (Elohim Peña) is the one who bought the expensive work of art, and Marc (Lucas James Vonesek) is the friend who can't understand it. More than that, he's downright angry about it. The two argue repeatedly about it, and their friend Yvan (Kevin Fanshaw) is stuck in the middle trying to make peace, while dealing with the stress of planning a wedding. The 90-minute play consists of several scenes between various pairs, asides by one character while the other is frozen, and a final confrontation between all three when things get a bit heated. This piece of art is the catalyst for the three men to delve into issues in their friendship that were about to boil over long before this white painting came into their lives.

The story plays out in a room that really looks like it could be in Serge's apartment - the "Club Room" at the newish Muse Event Center in the North Loop neighborhood of Minneapolis. With wood floor and paneling, cushy leather furniture, and a fireplace, it fits the posh and pretentious nature of the characters. Director James Napolean Stone makes good use of the unconventional space. All three of these actors do a great job of creating these specific characters, none of which are very likeable, except perhaps for the tender-hearted Yvan. On the night I attended, the audience barely outnumbered the cast, but yet they were totally in character, speaking directly to us in the asides, interacting with the environment by going to the bar to get a drink and taking advantage of the empty seats to lounge on the furniture in a character-specific way - exasperated, reserved, wounded.

Spending $200,000 on a piece of art is not something most of us can relate to, and these guys for the most part are pretentious jerks. In other words, this is a first world problem kind of play (not unlike God of Carnage). But what is relatable is a long-time friendship that hits a pretty serious snag due to the changing nature of the relationship. And the play is definitely worth seeing because it's smartly written, well acted, and takes place in a cool setting (with perhaps the comfiest seats I've ever experienced at the theater). But hurry - it closes this weekend so only four performances remain.