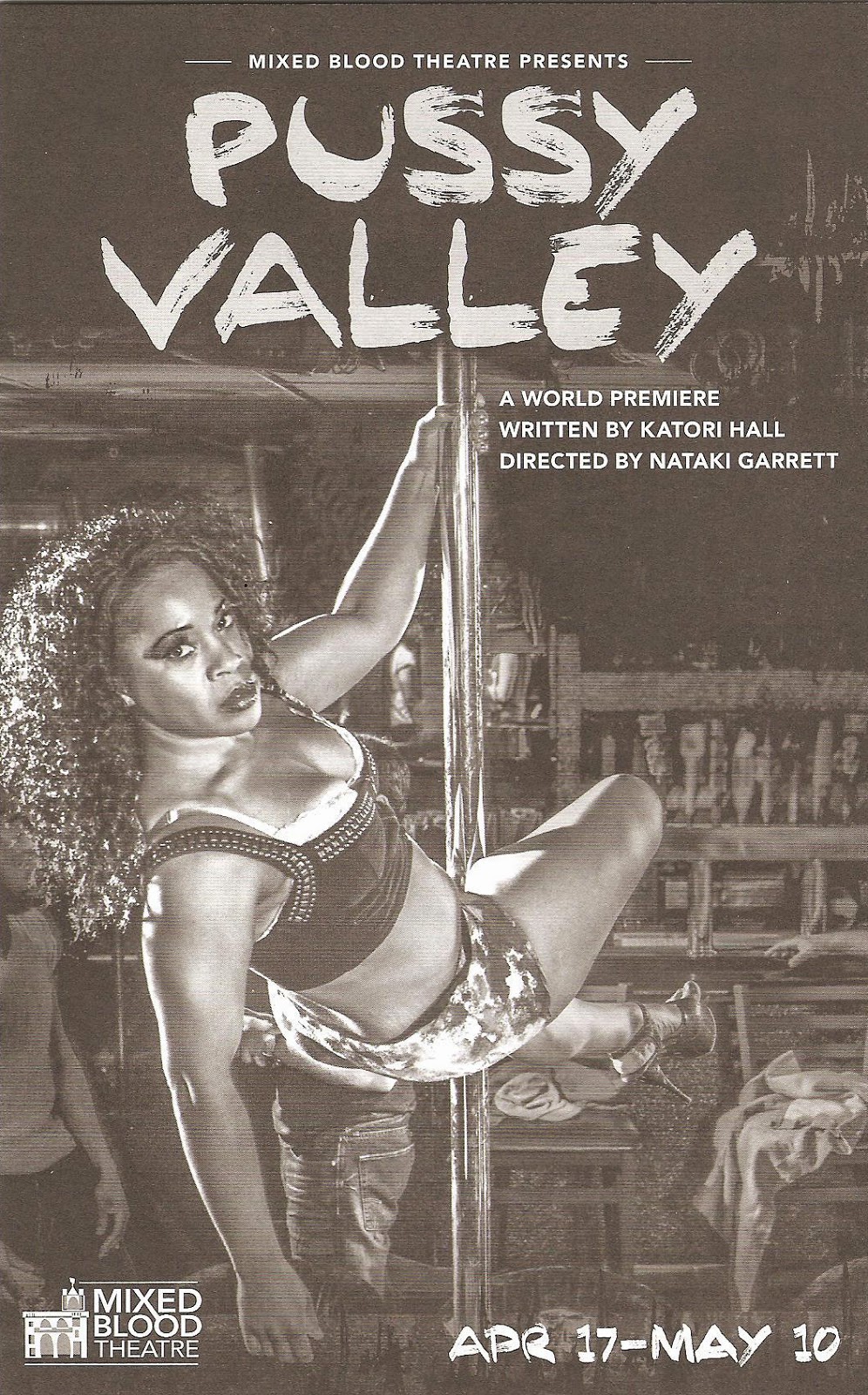 You know a play titled Pussy Valley is going to be on the edge, not your typical evening at the theater. And boy does it deliver! Mixed Blood Theatre's world premiere of the new play by Katori Hall (whose work was last seen last year on the Guthrie Proscenium Stage - the beautiful and imaginative The Mountaintop) is a raw and edgy look at the life of pole dancers in the Deep South. The playwright digs deep into this very specific world to find universal human truths. The result is funny, sexy, heart-breaking, and devastating, and yes, features some pretty awesome pole-dancing.

At the Pink Pony, we meet four very different women, whose life experiences have brought them to the pole for different reasons. There's tough Mercedes (an amazingly fit and fierce Jasmine Hughes), who uses her earnings to support her preacher father's church; fourth-generation pole dancer Get 'Em Gidget (the graceful Megan Rippey), who longs for somewhere that's green; mother of three Miss Mississippi (a vulnerable Joetta Wright), who hopes to escape her abusive boyfriend for the bright lights of L.A.; and mysterious newcomer Autumn Night (an enigmatic Tatiana Williams). Autumn's story is never fully revealed; she says that she's "all of the above," but maybe she represents anyone who's one step away from doing something desperate, daring, and dangerous, for a multitude of reasons. Presiding over the club like a cross between a mother hen and a warden is the cross-dressing Uncle Clifford, with an outstanding performance by Nicco Annan that is both hilariously entertaining and heart-breakingly vulnerable. They're supported by a wonderful cast of men (including James Craven as the preacher, Dustin Bronson in a Jekyll/Hyde performance as both Gidget's sweet boyfriend and Mississippi's horribly abusive boyfriend, and Ansa Akyea as the club bouncer and Mississippi's wealthy suitor), but this is really the women's story.

Each of the four women goes through her own personal journey over the course of the show, some for the better, some not so much. They each have a sort of dreamlike moment on the pole in which they express its deeper meaning in their life, in a weird way sort of like A Chorus Line (which just celebrated its 40th anniversary), only with pole dancers instead of chorus dancers. What it comes down to is that they're working towards a better life, for themselves, their children, their family, and pole dancing is the way that they've found to do that. Only they're never quite able to break out of it. On the one hand they're exploited and abused by the men around them, but on the other they own their power and take great pride in the artistry of the pole.

Speaking of artistry, the actors trained for a year to get in pole dancing shape,* and it's quite amazing what they've accomplished in that time. They're as strong, athletic, and graceful as professional pole dancers. OK I've never actually seen professional pole dancers, but I'm certain these women measure up! They physically and emotionally bring these complex and varied women to life.

Set designer Joseph Stanley has created the Pink Pony onstage with poles, a bar, and red velvet curtains. Although I'm surprised that the black box theater is set up as a traditional proscenium, especially after Colossal's brilliantly recreated football stadium. It would have been interesting to see a thrust set-up or something more intimate and club-like. Trevor Bowen's costume design brings authenticity to this world, and manages to create a specific personality for each of the women out of costumes that are in some cases just a swatch of spandex. Those of you sensitive to strobe lights, take note that there is ample use of them in this show, which creates some cool effects, but was a bit too much for my system to handle. I also had a hard time understanding some of the characters' accents, it's a very specific dialect, but fortunately Mixed Blood always has surtitles in their shows as yet another manifestation of their commitment to diversity of all kinds, including hearing ability.

Despite the salacious title and the presence of mostly naked women dancing on poles, Pussy Valley is a complex, deep, emotional story. I'm not sure it needs to be three hours long (I'm not sure any entertainment needs to be three hours long, other than Shakespeare and Sondheim and Lord of the Rings movies). There are a few scenes that could be trimmed or cut to make the story more compact, but it's an epic story. One that's difficult to watch at times because of the emotional and physical violence portrayed, but one that is compelling and engaging and hits you right in the gut. Playing now through May 20 - reserve tickets online for $20, or take your chances and show up within two hours before the show for free tickets as part of Mixed Blood's "Radical Hospitality" program.

*I predict a surge in pole dance classes in the next few weeks, check out Knockout Bodies in NE Minneapolis as an example.